Project expected to be completed in November 2014 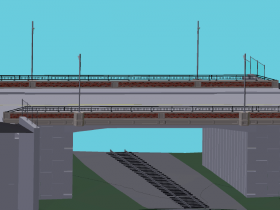 Beginning Monday, June 16, 2014 the City of Milwaukee will remove and replace the West Lisbon Avenue bridge between North 30th and North 31st streets. The project completion date is expected to be November 2014.

The current three-span continuous concrete slab bridge was originally built in 1932 by the Soo Line Railroad to accommodate a new railroad subway corridor running through this area of the city. Over the years, the bridge has undergone regular maintenance to keep it in service for more than 80 years. However, the bridge has now deteriorated to the point where it needs to be replaced.

A new single span concrete bridge will be constructed with historic looking bridge parapets to complement the red brick buildings found throughout the neighborhood.

Businesses and agencies along the construction corridor will be open as usual. DPW’s Support for Business program is providing signage throughout the area to help direct motorists and pedestrians to their destinations.

The project will cost $1.9 million and is funded by the City of Milwaukee. The contractor is Edward Kraemer & Sons.

For more information on the Lisbon Avenue bridge replacement project, please go to the DPW website at www.city.milwaukeegov/mpw.

Two Charged with Arson During Civil Unrest in Madison, Wisconsin by U.S. Department of Justice