MILWAUKEE, WI – Today, U.S. Senator Tammy Baldwin met with students and graduates at University of Wisconsin-Milwaukee to discuss the student loan debt crisis and reform legislation she has introduced to make college more affordable. Earlier this month, Senator Baldwin officially introduced the In The Red Act, a major reform to address college affordability and put America on a path toward debt-free college.

“Higher education should be a path to prosperity, not a path into suffocating debt. But unfortunately, college costs and student loan debt are holding back an entire generation and creating a drag on economic growth for our country,” said Senator Tammy Baldwin. “The idea that the next generation will be able to go further and do better than the last one is the heart of the American dream. I will be taking the stories I heard today back with me to Washington, D.C. so we can press for action on the In The Red Act.”

The In The Red Act will allow student loan borrowers to refinance outstanding debt at lower rates, increase Pell Grants to keep pace with rising costs and make a new investment in community college. Additionally, the legislation will support holding colleges accountable to ensure students graduate with high-value degrees and credentials. As a fiscally responsible approach to taking on the national student debt crisis, the In The Red Act is fully paid for and would make college more affordable by closing special interest tax loopholes.

More information on the In The Red Act college affordability reforms is available here.

More information on how the In The Red Act is fully paid for by closing tax loopholes is available here. 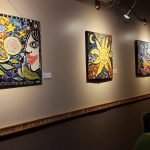 Visual Art: Art You Can Drink To by Todd Mrozinski