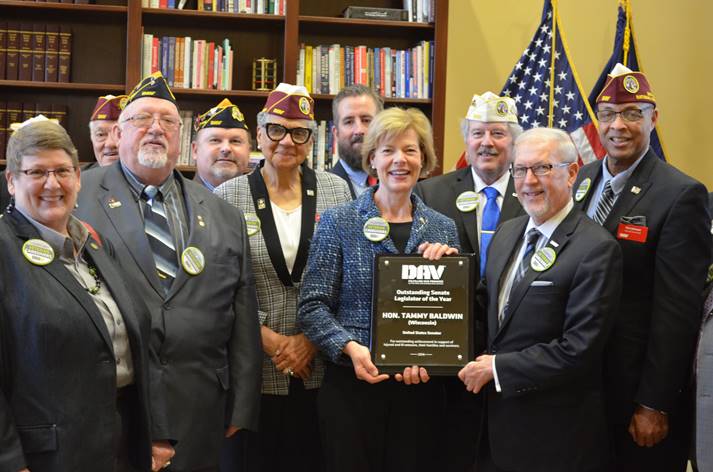 WASHINGTON, D.C. – In recognizing her efforts to combat the opioid epidemic among veterans and service members, U.S. Senator Tammy Baldwin was honored with the “Outstanding Senate Legislator of the Year” award by Disabled American Veterans (DAV). Senator Baldwin was selected by DAV for her strong leadership and bipartisan efforts in fighting the opioid epidemic while ensuring that ill and injured veterans have personalized care and safe alternatives for pain management. In addition, DAV recognized Senator Baldwin’s work to secure funding for veterans programs and to expand the veterans’ caregiver program.

“Our veterans and their families deserve real solutions to the challenges they face. I am proud to have worked to address these issues through collaborating with my colleagues across the aisle and fostering strong partnerships with organizations like Disabled American Veterans so that we can have a meaningful impact on the lives of those that have served and sacrificed for our country,” said Senator Baldwin. “Thank you DAV for recognizing and honoring these efforts. Together, we will continue to build on our progress by improving the health and saving the lives of veterans in Wisconsin and across our nation.”

“The recipients of this year’s advocacy awards have demonstrated what it means to keep the promise to the men and women who served,” said DAV National Commander Delphine Metcalf-Foster. “They each possess an unmatched dedication to fighting for the best interests of veterans and their families. It is a great honor to present these awards that recognize their critical contributions in the areas of veterans’ health care, benefits, policy and legislation.”

Senator Baldwin is committed to protecting, preserving and strengthening the Department of Veterans Affairs (VA) health care system so that it provides high-quality, timely health care to all enrolled veterans.

To improve opioid safety and care for our veterans, Senator Baldwin wrote the Jason Simcakoski Memorial and Promise Act in 2016, “Jason’s Law,” that was signed into law in 2016 to strengthen VA’s opioid prescribing guidelines, put in place stronger oversight and accountability and provide safer and more effective pain management services for our nation’s veterans.

In December 2017, Senator Baldwin called on the VA to conduct a nationwide review of its providers after a USA Today investigation found multiple providers hired by the Department had at least one state medical license revoked due to malpractice.

Senator Baldwin recognizes the need to hold the VA accountable because too often our veterans are getting hooked on drugs instead of receiving the care they need, and joined Senator John McCain (R-AZ) to introduce the bipartisan Veterans Overmedication Prevention Act. This would direct the VA to conduct an independent expert study on the deaths of all veterans being treated at the VA who died by suicide or from a drug overdose in the last five years. This review would ensure that the VA has accurate information about the relationship between veteran suicides and prescription medication.

Senator Baldwin also introduced the bipartisan Veterans Acquiring Community Care Expect Safe Services (ACCESS) Act to protect veterans seeking care through VA community care programs, like the Choice Program, from being treated by doctors who have been fired or who are suspended from the VA.

In addition, Senator Baldwin pushed to have last year’s Military Construction and Veterans Affairs Appropriations legislation include investments and improvements to the general health care of veterans across the country. This builds on Senator Baldwin’s effort to fund research into the complex set of Gulf War Illness symptoms to ensure more effective treatments are available to our veterans. This legislation strengthens investments in the VA Research Advisory Committee on Gulf War Veterans’ Illnesses, increases awareness of how Gulf War veterans are accessing benefits and enhances ongoing studies and research into the causes of and treatments for Gulf War Illness.

More information about the DAV advocacy awards is available here.

"Rural hospitals have been significantly impacted by revenue losses due to the COVID-19 pandemic, and without federal action, we are concerned that some may be forced to discontinue their physician training programs to remain open."