There were three passengers in the vehicle, minor children ages 1, 2 and 6.

The operator of the vehicle, identified as Bernard K Jones, exhibited signs of impairment. Mr. Jones performed poorly on Field Sobriety tests. There were three passengers in the vehicle, minor children ages 1, 2 and 6. None of the children were in car seats. Child Protective Services were called. The children were released to the care of their mothers at the scene.

Mr. Jones was conveyed to a local hospital where he refused a blood draw. A search warrant was obtained. Mr. Jones has an Implied Consent Conviction in Illinois.

Mr. Jones was arrested for OWI 2nd, passenger under 16.

For more information contact Faithe Colas, Director of Public Affairs and Community Engagement at 414-639-5506 or Faithe.Colas@milwaukeecountywi.gov.

After responding to the scene, investigating officers located two shelters on non-county-owned land on the west bank of the Milwaukee River.

Operating While Intoxicated is a serious offense that turns a vehicle into a weapon and other motorists into targets.

The driver, Eloy Mena, admitted he was the operator of the vehicle. 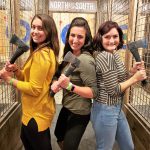