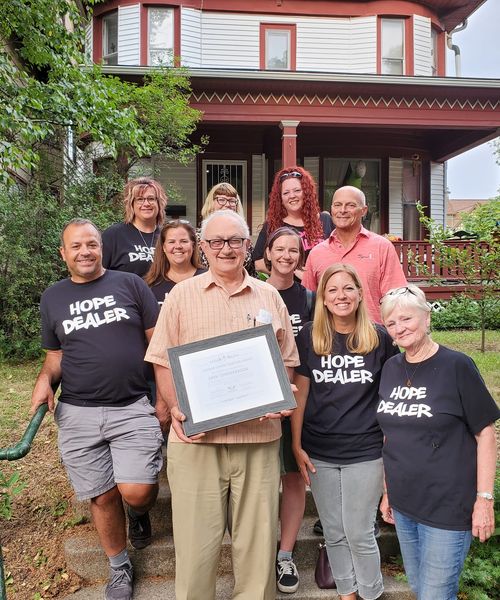 The award commemorates the life’s work of Jeanne Lowry who passed away in May 2020. She was a member of the Street Angels board of directors and a psychiatric nurse who pioneered street outreach to persons suffering with mental illness and homelessness in Milwaukee. Jeanne Lowry established the Homeless Outreach Nursing Center and Autumn West Safe Haven and trained nurses, social workers, and law enforcement officers in crisis intervention. Her quiet demeanor, persistence, compassion, optimism, and resourcefulness are the model for Street Angels’ ongoing outreach work.

Don Timmerman has been an anchor of Casa Maria since its opening in 1974 and has been part of its expansion to three houses, taking in homeless men, women, families, refugees, and asylees. He has volunteered at the shelter at night, keeping its doors open to take in people unable to get into other shelters, maintaining its food pantry, baby items room, clothing shed, and furniture ministry. He continues this work despite numerous health challenges and remains a beacon of kindness and support for the community.

Michael Komba, who nominated Don Timmerman for the award, said, “Don always wanted to treat people as if they were his own siblings going through a hard time. His dedication to the poor and commitment to peace has inspired so many. He never received any pay for this work. And what little money he had he would often give away to anyone who asked him for it.”

Street Angels board president, Jan Wilberg, described Don Timmerman and Jeanne Lowry as people who represented “the conscience of Milwaukee’s homeless services community” and as people who never gave up on anyone despite great barriers and challenges.

In accepting the award, Don Timmerman expressed his surprise and gratitude and told the assembled group of family, friends, and members of Jeanne Lowry’s family that helping people and giving them things they needed were the keys to happiness.

Street Angels, Inc., established in 2015, conducts outreach Tuesday, Thursday, and Sunday to people who are homeless and living outside, providing hot meals, bag lunches, survival supplies, clothing, and friendship to people living under bridges, in parks, cars, and other places in our community. The organization’s goal is to offer immediate help, build trust, and help connect people to permanent housing. Currently, Street Angels, powered by just 2.5 paid staff and an army of volunteers, is reaching 140 homeless friends each outreach night.