"Republicans and Democrats coming together to pass criminal justice reform is a monumental victory for the American people..."

Rep. Sensenbrenner: “Republicans and Democrats coming together to pass criminal justice reform is a monumental victory for the American people, and I’m proud to have been a leader of this effort that has been years in the making. I’m also proud to note that this bill reauthorizes the Second Chance Act, which has been instrumental in healing communities by helping those who have paid their debts to society to rejoin their families and live a productive life. I thank Chairman Goodlatte, Congressman Collins, and the many others who carried this bill across the finish line.” 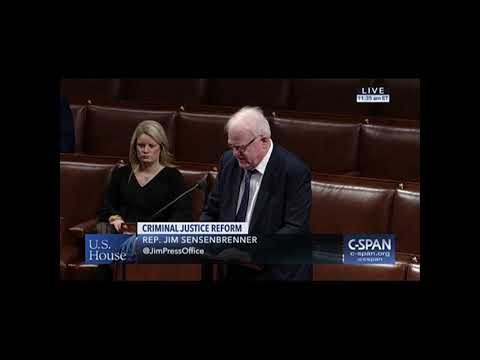 You can view Congressman Sensenbrenner’s remarks on the House floor here.

Background on the First Step Act:

The First Step Act is a combination of the original House-passed First Step Act, the Sentencing Reform and Corrections Act, and the Second Chance Reauthorization Act. The comprehensive package aims to reduce over-criminalization by preparing inmates to successfully reenter society through programs proven to reduce recidivism. Additionally, it gives judges greater discretion when sentencing low-level, nonviolent offenders and provides grants for reentry programs.

Reentry services have been improved in the decade since the Second Chance Act was implemented, which resulted in a reduction in recidivism and helped ensure a successful return to society for prisoners who have completed their sentence. More than 160,000 men, women, and youths returning home from prisons, jails, and juvenile facilities have benefited from Second Chance grants providing career training, mentoring, family-based substance abuse treatment, and other evidence-based reentry programs.

This investment has also paid public safety dividends. A report from the National Reentry Resource Center highlights how numerous states have experienced drastic reductions in statewide recidivism rates as a result of robust reentry services made possible in part through Second Chance.

Congressmen Sensenbrenner and Davis introduced the Second Chance Reauthorization Act in 2017 to build upon the success of the original legislation. The bill authorizes funding for both public and private entities to evaluate and improve academic and vocational education for offenders in prison, jails, and juvenile facilities.