Senator Johnson has left behind a trail of suspect choices and shady deals.

MADISON — With pressure mounting over his likely illegal $10 million corporate payout, it turns out Senator Johnson is full of other ethically questionable decisions. After spending nearly six years in Washington protecting a rigged economy, Senator Johnson has left behind a trail of suspect choices and shady deals. Now, with 47 days till the election there are too many scandals and not enough time.

So to help sort through Senator Johnson’s ethically questionable choices we’re launching a “Multi-Millionaire Madness” bracket challenge. We’ve pulled together eight of Johnson’s shadiest and most suspect decisions and they’ll compete for the crown of which is the worst. Each day we’ll announce the winners of the previous days’ round. You’ll want to stay tuned.

A bracket is attached to the email, and you can also view it here. Here are today’s matchups* 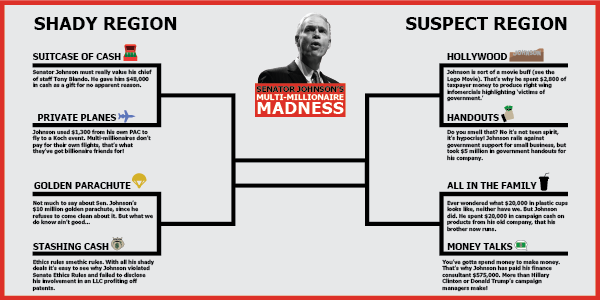