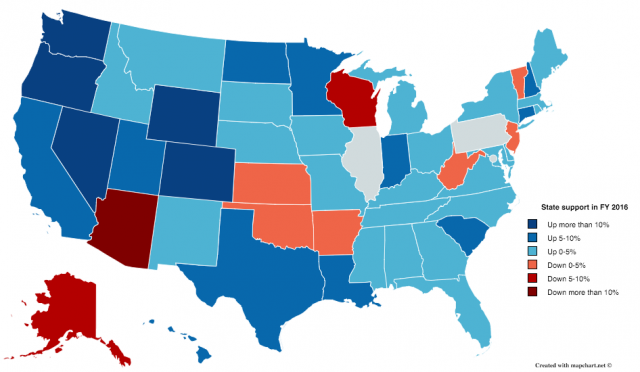 MADISON, WI – While the majority of states across the nation are recovering from the economic recession and boosting investments in higher education, a new study shows that Wisconsin continues to head in the wrong direction. According to the Illinois State University’s annual Grapevine Report, Wisconsin is one of only nine states to cut funding for higher education in the 2015-16 budget year.

“Local schools are struggling and nearly a million Wisconsin families are being burdened by $19 billion student loan debt,” said Senate Democratic Leader Jennifer Shilling (D-La Crosse). “It’s no secret that the historic Republican budget cuts to technical colleges and UW schools are taking our state in the wrong direction. Rather than continuing to cut funding for local schools and prevent economic growth, we need to restore our investments in education and grow our middle class.”

Democrats have put forward numerous proposals to restore recent budget cuts to Wisconsin’s universities, technical colleges and worker training programs. Additionally, Democrats are leading the charge on student loan debt relief with commonsense legislation to give families the option of refinancing their student loans at lower interest rates. A similar effort recently launched in Minnesota is expected to lower student loan payments for an average borrower by approximately $200 a month.

“Simply allowing individuals to refinance their student loans at lower interest rates could save families thousands of dollars a year,” added Sen. Shilling. “This is a commonsense measure that will boost our economy and make it a little easier for families to work their way into the middle class. The Higher Ed, Lower Debt Bill is a top priority for Democrats and I want to make sure we pass this bill and get it to the Governor’s desk before time runs out this session.”