Port of Milwaukee Reports Net Income of $1.4-Million in 2013

Revenue at the Port of Milwaukee exceeded expenses by more than $1.4-million in the last calendar year, and that money goes to the City of Milwaukee general fund where it will be used to support basic city services.  The Port’s finances are outlined in its annual report which was released today.

“We have closed our books on a successful year.  By providing cost-effective transportation options and efficient sites for companies to operate, the Port has supported regional business activity and employment,” Acting Port Director Paul Vornholt said.  “We have generated significant net income, and 2014 is shaping up to be another strong year.”

Last year’s cargo volumes at the Port of Milwaukee were previously reported to be up about 30% over 2012.  2013 operating revenues were $4,370,586; expenses totaled $2,937,975; and, the 2013 net income was $1,432,611.  Those totals do not include revenue from Milwaukee World Festivals for its operations on Port property.  The operator of Summerfest paid $1.3-million in rent in 2013. The Port’s net income numbers exclude depreciation, debt service, and interest expenses. 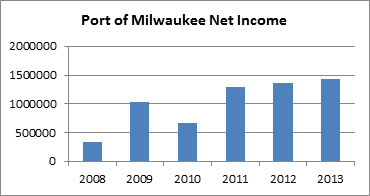 2013’s financial results show the highest net income in six years and are consistent with totals in recent years.

“Our Port continues to serve our community well,” Mayor Tom Barrett said.  “It is a valuable facility for businesses, a public resource that contributes to job creation, and a soundly managed operation that generates revenue for City government.”

The Port of Milwaukee is an economic entity of city government that is governed by the seven-member Board of Harbor Commissioners, a panel appointed by Mayor Barrett and confirmed by the Common Council.  It administers operations on the 467 acres that make up the Port.  In addition to promoting shipping and commerce, the Port of Milwaukee is the grantee of Foreign Trade Zone #41 which adds economic benefits to companies involved in international trade.