Dr. Spencer specializes in studies of the moons of the outer planets. 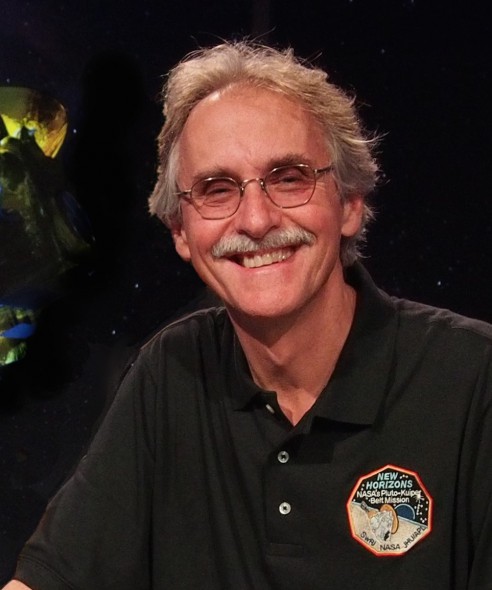 Dr. Spencer is a science team member on the New Horizons mission and is this year’s annual Rev. George V. Coyne, S. J., Lecturer in Astronomy and Astrophysics. He coordinated the search for flyby targets in the Kuiper Belt beyond Pluto. He also led the search by New Horizons, during the approach of Pluto, for potential debris hazards in the Pluto system.

The flyby was the culmination of more than two decades of effort, including a journey from Earth that lasted more than nine years. The mission continues deeper into the Kuiper Belt, and the spacecraft will visit the small Kuiper Belt object 2014 MU69 in January 2019. That visit is expected to provide a first close view of what may be the most primordial population of bodies in the solar system.

Dr. Spencer specializes in studies of the moons of the outer planets, particularly the four large “Galilean” satellites of Jupiter. He used the Hubble Space Telescope to discover several major volcanic eruptions on Io, one of Jupiter’s moons.

The annual lecture, hosted by the Marquette Physics Department, is named in honor of Rev. George V. Coyne, S.J., for his astronomical research and developments. Father Coyne gave the inaugural lecture in 2006, and was the lecturer again in 2014.

About the Rev. George V. Coyne, S.J., Lecturer in Astronomy and Astrophysics

The lecture series was established in 2005 through a generous donation by Mrs. Mercedes Hurley Hughes, alumna of the Helen Way Klingler College of Arts and Sciences and Marquette Trustee Emerita. As director of the Vatican Observatory, Coyne led a team of Jesuit astronomers in conducting cutting-edge astronomical research and in developing new telescopes and other instrumentation for studying the cosmos.

The annual Coyne Lecture honors the tradition of excellence in research exemplified by Father Coyne by bringing an outstanding astronomer or astrophysicist to the Marquette campus to give a public lecture explaining his or her research. The Coyne lecturer is selected annually by faculty members of Marquette’s Physics Department.