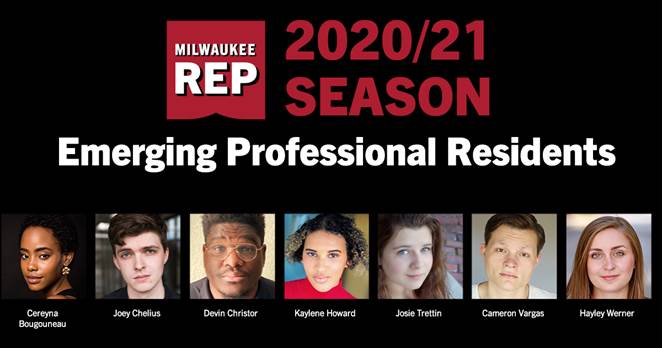 Milwaukee Rep’s EPR program serves as an entry into professional theater, an invaluable step towards obtaining an Equity card, an opportunity to make connections with directors and actors from around the country, and a chance to spend a season working in one of America’s foremost regional theaters.  Former residents can be found at many high profile theaters and production shops throughout the country.

Cereyna is a native of Saint Croix, US Virgin Islands and is thrilled to have the opportunity of using humanity to hopefully incite change through the theatre community. She studied Theatre Arts at Loyola University New Orleans and spent a summer with the Stella Adler Conservatory of the Arts in 2019. Her credits include Richard III, Romeo & Juliet, Caroline, Or Change, and The House That Will Not Stand.

Joey Chelius, Acting Resident
A Milwaukee native and graduate of the 2018 BFA-Acting Class at UW–Stevens Point, Joey is thrilled to be working at Milwaukee Repertory Theater during the 2020/21 Season! Having lent his talents as an actor, director, guitarist, and teaching artist to various theater companies, schools, and non-profit organizations throughout the Milwaukee area, he is humbled to be spending quality time working at such a special hometown theater during such an important time. Some recent professional credits include Jack Worthing in Skylight Music Theatre’s production of Being Earnest, Fred Gailey in Miracle on 34th St. with the Forte Theatre Company, and the guitarist in Hedwig and the Angry Inch with All In Productions at the Next Act Theatre.

]Devin Christor, Directing Resident
Devin is a Dallas native that has a focus in directing, stage management and stage combat. He graduated from the University of North Texas with a B.A. in Theatre. During undergrad, he was a member of the Afro-Blue Artistic Company, where he directed Big White Fog and The Intervention. After graduation, he decided to travel across the country, to work for different regional theatres to appreciate the different ideologies and viewpoints they have. While finding time to direct several local festivals, he had the pleasure to work with Gloucester Stage Company as their ASM, Trinity Repertory Company PA and Two River Theatre, as their PA.

Kaylene Howard, Acting Resident
Kaylene is very honored to be joining the Milwaukee Repertory Theater family in this exciting and brand new endeavor! She’s a recent graduate of the Pacific Conservatory Theatre Professional Acting Training Program (PCPA), where she received hands on training in a number of performance based skills, including Linklater, Grotowski, Suzuki, Stanislavski and more. Her favorite performances she’s collaborated on include The Wolves, The Cake, Antigone, Carrie and Tartuffe: Born Again.

Josie is a recent graduate of The Theatre School at DePaul University’s BFA Theatre Management Program. Hailing from Milwaukee, Josie is grateful to return to Milwaukee Rep for such an incredible residency. She grew up working both administratively and artistically for First Stage Children’s Theater and Milwaukee Rep. Beyond Milwaukee, she has performed at Utah Shakespeare Festival, Victory Gardens Theater, and The Kennedy Center. Most recently, she spent an invaluable summer working as an intern for DDO Chicago. Josie hopes to create theatre that supports, enriches, and reflects the communities in which she works. Her life’s ambition is to write a Dolly Parton jukebox musical and get it right.

Cameron Vargas, Acting Resident
Cameron is a recent alum of the PCPA – Professional Actor Training Program. Recently he played Stanley Jerome in Neil Simon’s Brighton Beach Memoirs along with a collection of other wonderful characters at the conservatory in shows such as The Little Mermaid, A Gentlemen’s Guide to Love and Murder, and Shakespeare in Love.

Hayley is honored to be joining Milwaukee Repertory Theater for their 2020/21 Season. Werner graduated from Chapman University in 2020 earning a B.A. in Theatre Studies and Psychology with honors. Werner has used her education to create theatre for social change and to inspire confidence in others through the arts. In 2018 and 2019, she served as an Education Intern at The Chance Theater in Anaheim, CA. Some previous productions include Dry Land, Next to Normal, No Exit, Cut (Director), Measure for Measure (Student Director), and Corpus Christi (Assistant Stage Manager).