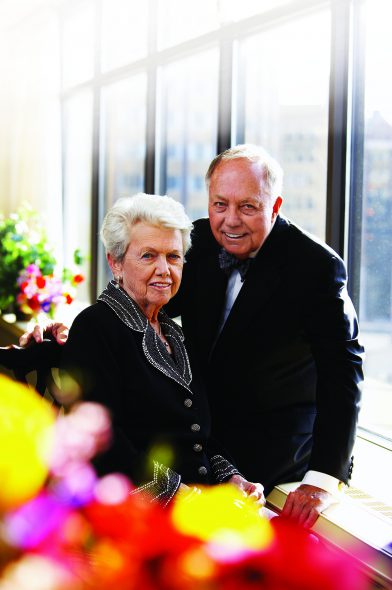 The Marquette University community mourns the loss of one of its closest friends and most significant benefactors, Kathryn “Kay” Eckstein. She was 90. Kay received her bachelor’s degree from Marquette in speech in 1949. She and her husband, Ray Eckstein (a 1949 graduate of the Law School), 91, donated $51 million to Marquette University toward construction of its Law School facility, which at the time (2007) was the largest gift ever made by individuals to a Wisconsin college or university. It was also one of the largest ever to a law school in the United States.

“Kay Eckstein lived a life filled with inspiration that was rooted in her Catholic, Jesuit education and faith,” President Michael R. Lovell said. “She was sincerely devoted to her family and remarkably generous to her alma mater. She leaves a legacy across our entire Marquette campus that will impact future students for many generations to come. We are deeply saddened by this immense loss and our thoughts and prayers go out to her husband Ray Eckstein and their entire family.”

The Ecksteins’ generosity can be found throughout campus and includes additional recent major gifts: The couple gave $5 million to the university’s Dr. E. J. O’Brien Jesuit Residence in 2014, and in January 2017, they issued an active $10 million matching challenge toward the construction of the university’s new residence hall facility, which will be named for longtime Marquette President Rev. Robert A. Wild, S.J., in appreciation and honor of his exceptional service and dedication to the university. In addition, the family played a key role in the Ray & Kay Eckstein Law Library as well as the Al McGuire Center.

“The Ecksteins’ generosity to Marquette has been exemplary, but it is unmatched by the love Ray and Kay shared with one another — for 70 years, Kay truly was the love of Ray’s life,” Father Wild said. “Kay’s passing is a deeply personal loss for me, as well. She was a great friend, and I’ll never forget the joy they brought me one birthday when they personally called to tell me about the landmark gift they would make to our Law School. I will cherish that and many other memories of Kay.”

“Kay Eckstein was an extraordinary woman,” said Dean Joseph D. Kearney of Marquette University Law School. “She believed in seizing opportunity — and she did just that through her Catholic education growing up in Chicago and at Marquette University and in her life with her husband, Ray, and their family in Cassville, Wis. Kay also believed in providing opportunity. For the sake of future students, she helped transform Marquette Law School and the Marquette campus more generally. We will be forever grateful.”

In 2007, when Marquette University announced the couple’s $51 million gift, Kay Eckstein said their granddaughter’s experience as a graduate of the Law School had reinforced their sense of gratitude for the values of a Marquette education. “We saw once again the caring, challenging environment that Marquette continues to offer its students,” she said.

As the couple was announcing their 2007 gift, Ray Eckstein shared: “My wife and I have many fond memories at Marquette. It was the place of our meeting and courtship, and the beginning of our wonderful life together. Catholic, Jesuit education has played an important role in our lives. We are honored and thrilled to be able to provide the Law School with the foundation for a new building, so that students in the future can have the opportunity to benefit from the education we did.”