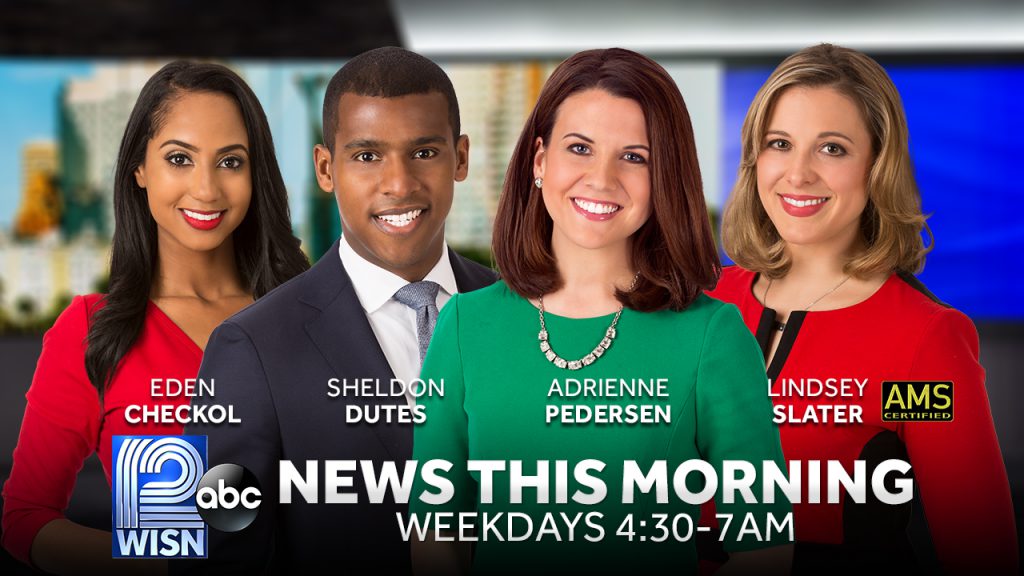 MILWAUKEE, WIS. (July 29, 2019) – WISN 12 Meteorologist Lindsey Slater is moving to “WISN 12 News This Morning” weekdays from 4:30 a.m. to 7:00 a.m., taking over for long-time WISN 12 News Meteorologist Sally Severson, who has decided to reduce her schedule to appear exclusively on “WISN 12 News at 11 a.m.” The changes at the weather desk will take place in late August of 2019.

“I’ve been bringing weather coverage to Wisconsin for over 30 years! I absolutely love doing it, but I’m ready to have a little more time for family, friends, and enjoying our weather outside of the studio,” says Severson. “This certainly isn’t an end. I’m excited to continue the 11 a.m. newscasts and be a part of my favorite WISN 12 specials and events.”

“We are delighted that Sally will remain with us, as she is a staple at our station and beloved by everyone,” says Jan Wade, president and general manager of WISN 12. “So, this isn’t goodbye, but rather a changing role.  We are also fortunate to have Lindsey. She is tremendously talented, loves the morning role and will carry on our tradition of delivering quality weather coverage to all of Southeastern Wisconsin.  Additionally, she enjoys a grass roots connection with viewers,” adds Wade.

“Sally has set the standard for how you prepare people for whatever weather lies ahead,” Says Slater. “I am honored to take on the weekday morning Meteorologist role and get viewers ready for the day, and I can’t wait to join Sheldon, Adrienne, Eden, and Matt!” adds Slater.

Lindsey Slater joined the Weather Watch 12 team in June of 2016, serving as meteorologist on WISN 12 News during weekend evenings. Prior to WISN 12, she covered the now historic 2011 tornado outbreak in Mississippi, as well as major flooding while working for WDBD-TV. Slater also served as a meteorologist for WKOW in Madison. She began her weather career in 2006, interning with none other than ‘Milwaukee’s Chief Meteorologist,’ WISN 12’s Mark Baden. At WISN 12, she has been counted on to deliver accurate forecasts and help viewers prepare and plan, as well as alert them first and keep them safe when severe weather moves in. When she is not on the desk or in WISN’s weather center, Slater can be seen out in the community reporting for 12 News. She is often one of the first on the scene before, during, and after severe weather strikes Southeastern Wisconsin, including the historic flooding in Burlington, WI in the summer of 2017, and the polar vortex in the winter of 2019. Slater’s connection to the area runs deep, she grew up in Franklin, WI.

Severson has been providing early morning weather broadcasts on “WISN 12 News This Morning” since 1988. An award-winning meteorologist, she has covered weather-related disasters in Wisconsin and around the country, including first-hand reports from Punta Gorda, Fla., during Hurricane Charley in August 2004 and the tornado outbreak in Moore, Oklahoma in May 2014. Severson has twice been awarded Best Weathercast by the Wisconsin Broadcasters Association and was inducted into the Emmy Silver Circle, a lifetime achievement honor bestowed by the National Academy of Television Arts and Sciences.