Waukesha, Wis. — Aug. 14, 2017 — Generac Power Systems Inc., a leading manufacturer of power generation and engine-powered products, and the Wisconsin Economic Development Corporation (WEDC) announced that a WEDC award of up to $10 million in Enterprise Zone Tax Credits through 2021 will support the company’s growth plans at its Waukesha, Wis.-based global corporate headquarters and manufacturing facilities throughout Wisconsin, a project expected to create at least 400 jobs over the next five years.

Generac plans to invest more than $73 million in building renovations and equipment in a growth plan that will encompass its facilities in Waukesha, Oshkosh, Jefferson, Eagle, Whitewater and Berlin. The plan calls for the expansion of Generac’s corporate headquarters, research and development, and production operations in Wisconsin.

“As we’ve grown and added facilities throughout Wisconsin, it became clear that we needed to invest in a cutting-edge space at our corporate headquarters allowing us to dramatically advance our key product development and engineering activities,” said Aaron Jagdfeld, president and CEO of Generac. “We’ve been on our current campus since 1965, but a lot has changed since then. This project will help us realize efficiencies at our headquarters facility that will drive continued innovation. 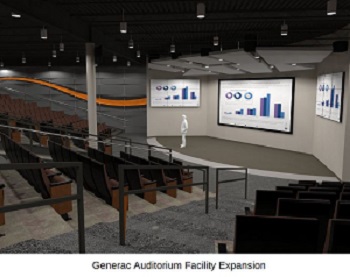 Jagdfeld added that particular emphasis would be placed on advanced research and development capabilities, including the addition of equipment and technologies to enable faster prototyping and testing of products in-house. “These investments will allow us to quicken the pace of our product development cycles, which is critical to remaining at the forefront of the industries we serve.”

“From its beginnings in a Waukesha County garage more than 50 years ago, Generac has become a leader in its industry and now employs 2,000 people throughout the state,” said Governor Scott Walker. “I applaud the company for making the commitment to continue to grow in Wisconsin. This is the latest example of companies in Wisconsin and around the world that are expanding or establishing operations in the state because of the pro-business climate our policies have created over the last six years.”

The actual amount of state tax credits awarded to Generac by WEDC will be contingent upon the number of new jobs created, the level of capital investment the company makes and the amount spent on employee training. Generac plans to make significant investments to train its workers on the new equipment it will be installing.

“In addition to the jobs created by this project, this expansion will enable Generac to usher in a new era of innovation and develop products to reach new markets and position the company for future growth,” said Mark R. Hogan, secretary and CEO of WEDC, the state’s lead economic development organization. “That is good news for southeastern Wisconsin and the entire state.”

In addition to the 400 jobs expected to be created by Generac, an economic modeling study projects that the project will indirectly generate 356 additional jobs in the region. Over a five-year period, the direct and indirect jobs could generate $9.5 million in additional state income tax revenue.

Generac Power Systems, Inc. (NYSE: GNRC) is a leading global supplier of backup power and prime power products, systems and engine-powered tools. Back in 1959, our founder was committed to designing, engineering and manufacturing the first affordable backup generator. Fifty-seven years later, the same dedication to innovation, durability and excellence has resulted in the company’s ability to expand its industry-leading product portfolio into homes and small businesses, on job sites, and in industrial and mobile applications across the globe. Generac offers single engine backup and prime power systems up to 2 MW and paralleled solutions up to 100 MW, and uses a variety of fuel sources to support power needs for our customers. We are proud to be named, in back-to-back years, the Frost & Sullivan 2014 and 2015 North American Natural Gas Generator Set Company of the Year. Visit Generac.com for more information.

About the Wisconsin Economic Development Corporation

The Wisconsin Economic Development Corporation (WEDC) leads economic development efforts for the state by advancing and maximizing opportunities in Wisconsin for businesses, communities and people to thrive in a globally competitive environment. Working with more than 600 regional and local partners, WEDC develops and delivers solutions representative of a highly responsive and coordinated economic development network. Visit www.inwisconsin.com or follow WEDC on Twitter @InWisconsin to learn more.

Ted’s Pizza Palace to receive up to $10,000 to help give business facelift

Winner to receive up to $10,000 to give their business a makeover this spring