The shooting in Pittsburgh this morning is an absolute tragedy. Anti-Jewish bigotry, and all religious and ethnic bigotry, is unconscionable.

The surge in anti-Semitic incidents in the US between 2016 and 2017, the most recent data, was the highest increase in incidents on-record since the Anti-Defamation League started reporting on them in 1979.

The City of Milwaukee Equal Rights Commission affirms its strong condemnation for anti-Semitism as well as for any incitement to hatred and violence. We are committed to protecting the fundamental right of belief, wherever it is questioned or attacked.

Our deepest sympathies go out to the victims, police officers, and members of the Tree of Life Synagogue. The ERC stands in solidarity with all Jewish communities and victimized populations around the world.

A Statement by The City of Milwaukee Equal Rights Commission Monday, November 5, 2018 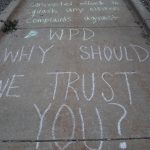