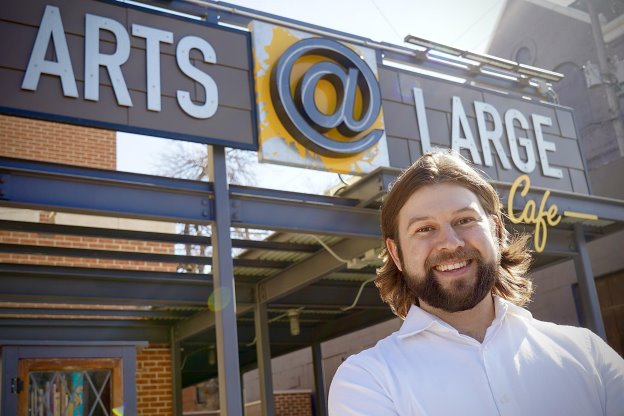 MILWAUKEE, Wis. (March 17, 2021) – The Arts @ Large (A@L) Board of Directors is pleased to announce the appointment of long-time community arts advocate Sean Kiebzak as its new Chief Executive Officer (CEO).

Kiebzak has worked with A@L in various capacities for more than 10 years, most recently as the Chief Operating Officer.

A@L was founded in 2001 to bring equitable arts-integrated learning experiences to youth across the city of Milwaukee.

“I’m committed to furthering the mission of Arts @ Large, well into the future, by promoting the beauty inherent in the arts and nurturing the personal growth of students, teachers, families and artists who engage with Arts @ Large,” Kiebzak said.

A subcommittee of the Arts @ Large Board of Directors created a rigorous evaluation process based on the core mission of the organization. After hearing the committee’s recommendation and reviewing evaluation materials, the A@L Board unanimously voted to make Sean Kiebzak the new CEO of Arts @ Large. “As COO, Sean worked hard to provide the Milwaukee community with meaningful arts experiences,” commented A@L Board Chair Leila Sahar. “His past experiences and continued growth have broadened his knowledge and ability to be the leader we all want to be in charge at A@L.”

Among the work he has done for the community in the past 10 years, Kiebzak played a leading role in organizing community partners to redevelop a city park in the Walker’s Point Neighborhood into an Eco-Arts Park. He oversaw the implementation of hundreds of artist residencies serving tens of thousands of Milwaukee youth.

“Working alongside Teri, who also happens to be my Mother, I can say with absolute certainty that I’ve learned from one of the best in the industry. I will undoubtedly have some very big shoes to fill,” Kiebzak said.

With youth always at the forefront of his decision making, Kiebzak conceptualized a new Career Development Program engaging high school students from Bradley Tech and Trade School as paid interns to work alongside the contractors who built the A@L Community Center.

“At A@L, we see everything as a learning experience,” Kiebzak said. “Even in the midst of full construction, we could tease out a lesson that we could share with our young leaders.”

Today, the program has grown to employ more than 20 youth each year, providing opportunities to build skills in a variety of career-based tracks including environmental justice, youth activism, digital and multimedia arts, business leadership and arts administration.

“The arts have played a crucial role during the pandemic and will remain instrumental as members of our community reintroduce themselves to society,” Kiebzak said. “As an arts organization serving the needs of our community, we have a responsibility to combat isolation and support social, emotional needs through enriching arts-based programs.”

Arts @ Large was founded in 2001 to bring equitable arts-integrated learning experiences to youth across the city of Milwaukee. As Arts @ Large approaches its 20th anniversary and welcomes a new generation of leadership, the strong foundation established by Co-Founders Teri Sullivan and Kim Abler will sustain the organization as it continues to grow in depth and breadth of programming. Sullivan and Abler literally started the program out of the trunks of their cars. Throughout the past 20 years, through the sound and dedicated leadership of retiring CEO Teri Sullivan, Arts @ Large has provided more than $13 million of arts-rich programming for the community, $5 million of which has gone directly to engage artists in school-based and community residencies. In the future, Sullivan will continue to work with A@L as the CEO Emeritus.