Hotel projected announced in August 2015 by Gary Grunau for Schlitz Park. The hotel wasslated to be built at the intersection of N. Martin Luther King Jr. Dr. and W. Vliet St.

The hotel was anticipated to include 140 rooms over four floors. It was estimated to cost $15 million.

Schlitz Park to undergo $76M in development over next 5 years 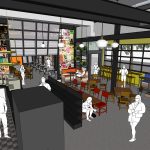