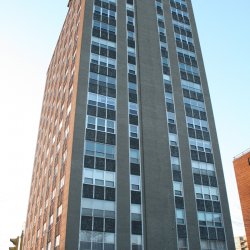 Edgewater Terrace is a 74-unit residential condominium tower located at the northwest corner of Brady St. and Prospect Ave. The 17-floor tower was completed in 1967.

In 2012, the building underwent an HVAC upgrade as part of the Me2 program.

The building was originally built as an apartment building by Dr. Hayward J. Friend. Friend previously owned the 12-bed Edgewater Hospital at the site in a converted house (there was an additional home at the site that was also demolished). The two fire places on the 17th floor are from the converted house. Friend had acquired the house from Irving Seamans.

Edgewater Terrace was converted to condominiums between 1976 and 1979.

Late on July 4th, 2011, James Greiner fell to his death in the building after trying to jump down from an elevator stuck between the 12th and 13th floors. After prying the doors open, Greiner jumped down to the 12th floor, but his momentum propelled him back into the shaft. The medical examiner’s report estimated he fell 118 feet.

The building has been subject a fire in 2004.

The building at one time was owned by Edgewater Properties, an investment group led by Oliver Plunkett. Plunkett was charged by the Wisconsin Attorney General with six felonies after declaring bankruptcy. He pleaded no contest to the six felony charges (four counts of securities fraud, one count of selling unregistered securities, and one count of illegal transfer of funds). The illegal transfer of funds was the use of $761,852 from the Edgewater Terrace apartments partnership to buy a hotel in the Virgin Islands. 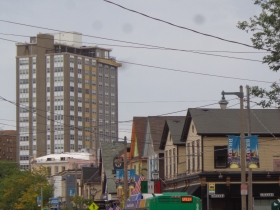 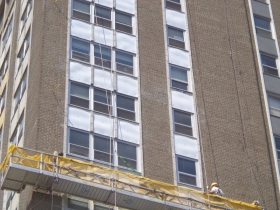 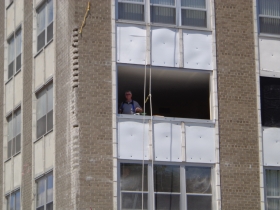 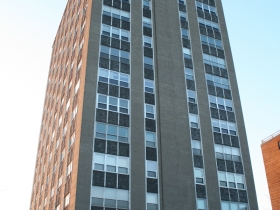