Six-piece John the Savage ain’t afraid of no ghosts — the ghastly and sinister are this debut full-length’s bread and butter. From Mexican standoff (“Me & the Warden: Standoff”) to murder ballad (“Ballad of a Killman, pt. XI”), it’s thematically dark, and though the vocals are most often indecipherable wailing, the band’s ability to incarnate […]

Things don’t always turn out as they should, but Texasborn singer/songwriter Jolie Holland has no desire to turn life’s lemons into anything but woeful songs. With addiction, depression, and both shattered hearts and dreams rampant, the fine line between dead and alive is often indistinguishable. It’s not ideal listening material for those with suicidal tendencies, […]

Icelandic songstress Emilíana Torrini is not Björk, but she certainly sounds like her. It’s not just her heritage or soprano, but her irreverence and eclecticism, too. Torrini’s voice is quirky and youthful, yet emanates street-smarts, which also brings anti-folk singer Regina Spektor to mind. Unfortunately, Torrini is best known for contributing a track for the […]

Photos by Dane Haman Jon Mueller, co-manager of Pecha Kucha in Milwaukee. pecha kucha (n) /puh-CHAH-kuh-chah/ Japanese origin. 1. the art of conversation; 2. noisy chatter; 3. coming August 26 to Milwaukee. Imagine if before facing the auditorium on your big presentation day, you could – without inhibition or shutting your office door – swig […]

Despite Omaha boys The Faint’s efforts to shock on 2004’s unsubtle Wet from Birth – an overzealous, not-so-scientific take on biology – it was the popularity of a subsequent internet game (allowing haters to drop-kick the dance-punk five piece — for points!) that landed them on the cultural radar. Though the boys have shown strong […]

Must a band be loud to be heard? Or exceedingly different to be noticed? Must the middle ground be mediocre? L.A. duo Earlimart’s sixth full-length release, Hymn and Her, a string of twelve easy and modest indie rock songs, has the answer: it’s lovely, for once, not to have to stare directly into the sun […]

If Kate Jackson, vocalist and co-songwriter for the Long Blondes, were really the “glamorous punk” she proclaims herself to be, she’d understand that it takes time before an “out” trend can become “in” again. Still, her Sheffield, England-based five-piece insists on reconstituting what Franz Ferdinand and Bloc Party did better just a few years ago. […]

Timothy Sullivan ain’t proud of his past life as an MTV “one track” rap wonder, and his work under alias Tim Fite is his attempt at renewal. His free 2007 internet LP, Over the Counter Culture, lashed anger at the state of our hate- and greed-mongering union. Fair Ain’t Fair beelines to the acceptance stage. […]

An enigma is rare in the present state of predictable punk pop music, but A Band In Hope, the third release from Oakland quartet the Matches, will mystify. Just as easily as he can change holiday costumes—duke one year and James Dean the next (“Between Halloweens”)—vocalist Shawn Harris slips between musical identities from a dead-ringer […]

Stephen Malkmus & The Jicks @ The Pabst

“The last time we played here, we didn’t play here,” bassist Joanna Bolme reminisced, referring to The Jicks’ 2003 “Milwaukee Show,” where they unexpectedly played an entire set pulled strictly from the Pavement back catalog. Their March 20th show at the Pabst Theater, the second stop on the Jicks’ spring 2008 headlining tour with John […]

Stephen Malkmus and the Jicks

Despite his reputation as a weirdo, Stephen Malkmus’s fourth solo record plays like the work of an average dude hashing out life’s universal kinks. That’s right — even beatniks like Malkmus struggle with the same “sometimes it feels the world’s stuffed with feathers, table-bottom gum just holding it together” thoughts that we all do – […]

Everyone loved her 15 seconds of “How Can I Tell You” in that diamonds commercial. That’s just too bad, since a full-length version isn’t on Jukebox, Chan Marshall’s second CD of cover songs since 2000. Backed by the Dirty Delta Blues band, Marshall keeps things sparse as usual and swaths the songs with her signature […]

As teenagers, they learned that musicians get girls. Still embracing that high school mentality as adults, The Response “keep[s] getting older,” but their fans “stay the same age,” says bassist Mikey Blanchard. More playful than pedophiliac, the four-piece has a sense of humor that will surely inspire all kinds of journalistic inaccuracy as they make press for their overdue debut LP, releasing this month.

After seven rounds, nationally-recognized Art vs. Craft has become a Milwaukee institution – by way of minimally institutional principles. Also an anomaly: over 75 progressively-minded, “new wave” artists, crafters and designers will be vending their handmade and independent wares – just in time for the holiday feeding frenzy.

By A.L. Herzog Female hip-hoppers Spero, Hesta Prynn and DJ Sprout are pushing thirty, but they still sound like snot-nosed kids who rhyme as if double-Dutching in the schoolyard or cheering at a high school football game. On their third full-length record, their political agenda is never in question, and though they’re outspoken, they’re also […]

The average person does not listen to instrument-led rock music. At most, it’s used as background noise while cleaning, studying, or even sleeping – earning a position not much higher than a Sharper Image sound machine. Without prominent vocals, it’s easy for most to lose interest. Unless, like the not so itty-bitty eight-piece Citay committee, […] 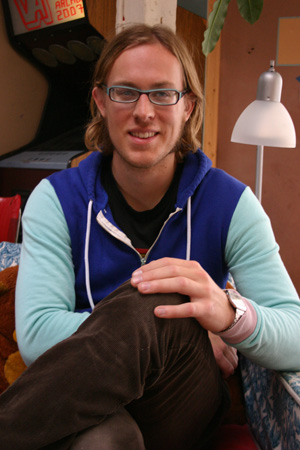 It’s not easy being green, which is why John Riepenhoff, owner and curator of the Green Gallery, established the third-floor Riverwest venue expressly for fresh, emerging artists in 2004. An art school graduate and painter himself, the now-25-year-old could relate. Riepenhoff is interested in social interaction between artists of all media. The space currently hosts […] 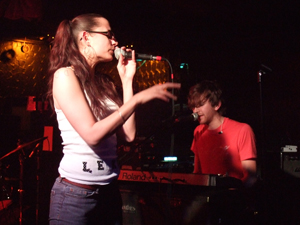 Affordable drinks and public smoking are two things homesick MC Lunaversol9, recent San Francisco implant, misses most about Milwaukee. Another is, of course, the people—not limited to her newfound friend and cohort Nicholas Sanborn. Sanborn, who frequented the coffeehouse where Luna worked, was familiar with her background with local hip-hop mainstays Def Harmonic, and presented […]

The Sadies play like a Quentin Tarantino film — a synthesis of cult genres (surf, rockabilly, psychedelia), characters with memorable names (Sean Dean, Dallas Good) wearing smart suits, and a sweeping casualness about it all. Unlike Tarantino, the Toronto band’s fifth studio release has an absence of curse words and racial slurs. It’s hard to […]

Victoria, B.C.’s most acclaimed Party Girl, Terrible Hostess and less lime-lighted half of the Corn Sisters, Carolyn Mark has removed the training wheels of collaboration (her last release was strictly duets) and is again riding solo. Nothing Is Free, whose liner notes devote the disc to “all the Cowboys, Vampires, Pirates, Poets, Scarecrows and Enablers,” […]

Like the “HeadOn: apply directly to the forehead” commercial, Tegan and Sara’s “Walking With a Ghost” (from 2004’s So Jealous) proved that repetition equals retention. The simplistic and cyclical single earned an EP dedication by The White Stripes; the Canuck twin songwriters took note. On The Con, “Walking With a Ghost”-equivalents “Back in Your Head” […]

While an American Idol monopolizes the dial with a hit about mutilating a cheater’s automobile, Kelly Willis returns some integrity to crossover-country. This mother of four who took a five-year sabbatical since her last release to raise her children is proof that hip is possible without the need to be trashy or pseudo-political – a […]

Photo by Lenny Gilmore They may have a cute name, cute merch and cute alternating boy/girl vocals, but the nine-month-old Kid, You’ll Move Mountains aren’t aiming to charm, though frontman Jim Hanke does admit the five-piece has had “great luck fall in [their] lap.” This luxury has allowed a somewhat lax approach to promotion and […]

Anyone with even a minute awareness of The Decemberists would find it challenging to resist asking guitarist Chris Funk all kinds of ridiculousness, like the random “What’s your favorite Western?” or the general “Why are you guys so fun?” But, it takes only one spin of anything in their catalogue to understand – Guitarmageddon, stage […]

Not having thoroughly kicked all her baggage to the curb with 2005’s Leave the Sad Things Behind, San Francisco singer-songwriter Paula Frazer follows up with another album about moving on. Her fourth solo release, Now It’s Time, also revives her former band, Tarnation, as support. Frazer soups up alt-country standbys with jangly honky-tonk piano on […]

Already in play to sell Nike shoes, the single “All Ones & Zeros” gets The Early Years’ debut out of the blocks at lightning speed; but it’s false advertising for the record as a whole. Although the intro song is a propelling dash, what follows lacks similar kinetic force. Intentionally. This three-piece, comprised of a […]

The eccentric title, packaging and track listing initially intimidate, but Of Montreal’s latest is actually quite accessible. It kick-starts as a lively, logical continuation of 2005’s The Sunlandic Twins, then capriciously plunges, only to rocket straight back to the skies. All the while, Kevin Barnes, currently Of Montreal’s lone orchestrator, delivers downtrodden narratives almost sociopathically. […]