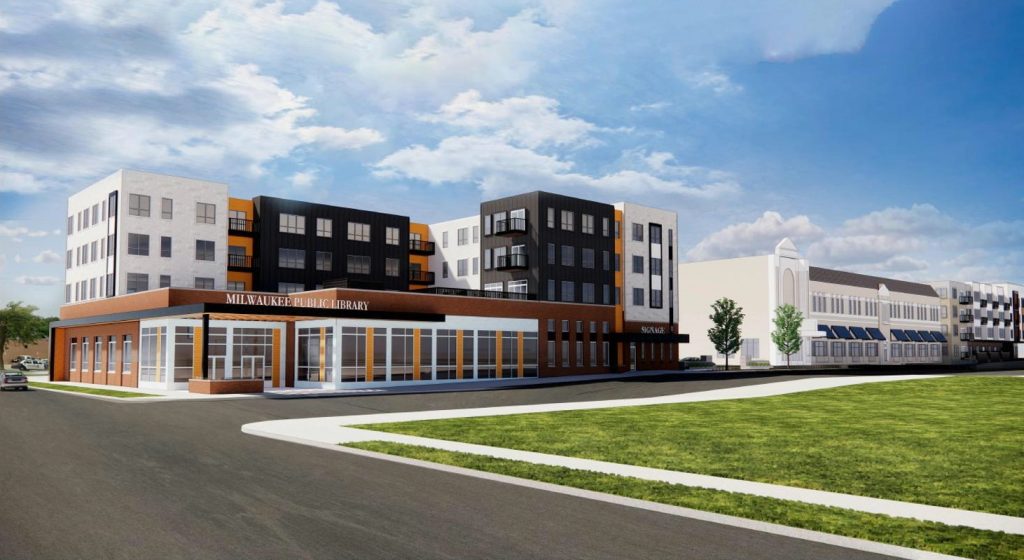 After seven years of planning, the development team behind a new Martin Luther King Library branch and connected apartment complex is gearing up for a spring groundbreaking.

“This project has been a long-time coming,” said Milwaukee Public Library library construction manager Sam McGovern-Rowen to the City Plan Commission on Monday afternoon. “We are just thrilled to finally be here.”

The new library will be built at the corner of N. Martin Luther King Jr. Dr. and W. Locust St. and continue the city’s successful model of replacing stand-alone libraries with new facilities located on the first floor of larger, tax-paying buildings.

It will occupy approximately 18,000 square feet at the base of a four-story apartment building developed by Emem Group and General Capital Group. The 93-apartment proposal also includes the partial demolition and redevelopment of the Garfield Theatre to the north and the construction of a second new apartment building at the far northern end of the block.

The current library opened in 1971 and is part of a generation of one-story libraries whose mechanical systems are failing and whose designs can’t accommodate the varied uses of modern libraries.

“These projects are like the town hall of each neighborhood, they’re the civic center, the community rooms, the flexible spaces are really gathering places,” said McGovern-Rowen. He said people often come to use the facilities just for internet access. Books are still present, but just one of several amenities.

Get a daily rundown of the top stories on Urban Milwaukee
“We anticipate some sort of makerspace possibly, like we have on Mitchell Street,” said McGovern-Rowen of another of the redeveloped libraries. “The new spaces are all about having a flexible community center.”

He said the design would intentionally accommodate the high number of children and teenagers that use the current library. The city hired Moody Nolan to design the library’s interior, which it will own as a condominium. JLA Architects is designing the rest of the complex.

MPL initially put the project out for bid in 2016, selecting developer Lavelle Young in December of that year. But Young, working with a number of different partners, could never secure financing.

General Capital Group and then Michael Emem‘s quickly-growing Emem Group were brought on in 2019 and 2020 to replace Young. The new partners secured low-income housing tax credits in spring 2021 to finance much of the project in exchange for setting apartments aside at below-market rates for households making between 30% and 80% of the area’s median income.

But inflation delayed the project and several other tax-credit-supported developments. The city and state have moved to close financing gaps via a variety of funding sources, including tax incremental financing (TIF), each entity’s American Rescue Plan Act (ARPA) allocation and the city’s Housing Trust Fund.

According to the TIF district documentation, the project’s financing package relies on $18.1 million in housing tax credits, $6.4 million in mortgage financing, $5.5 million from the library, $3 million from the state’s ARPA grant, $1.5 million from the city’s ARPA-backed Housing Trust Fund, $940,000 in TIF support, a $775,000 grant from Bader Philanthropies, $666,300 from a deferred developer fee and approximately $270,000 in other grants and loans.

“We have taken our time to get here and we are very excited about the prospect of finally moving forward,” said McGovern-Rowen.

The plan commission voted unanimously to approve selling three properties to the development team for $1 each. That includes the current library, as well as two vacant lots at the north end. A certified survey map to combine all of the public and private parcels was approved by the Common Council last week. The design was previously approved.

The Garfield Theatre building, 2933-2957 N. Martin Luther King Jr. Dr., would be redeveloped. The two-story commercial building and lobby structure that faces the street would be redeveloped while the theater structure, located along the alley at the rear of the site, would be demolished and used for surface parking.

The remaining building would become nine live-work, two-story apartments. Tenants could have street-fronting retail space, while maintaining a private entrance in the back.

“We are really restoring the true gem of the Garfield Theatre, the portion that is architecturally significant,” said Emem in September 2021 to the Bronzeville Advisory Committee. The exterior facade, including the marquee, would see new life. The 1,800-seat theater opened in 1927 just a few months after the similarly-designed Oriental Theatre. The auditorium space itself is in “rough shape,” said the developer. He said restoration costs would be in the millions and a new use would still need to be found. All of the seating has been removed, water damage from a roof leak is evident and the acoustical plaster is in disrepair. Emem said the theater hasn’t been used for films for more than three decades (Cinema Treasures puts the date at 1965), but the Greater Philadelphia Church of God in Christ uses the space for church services.

The Public Library Board of Trustees rejected an earlier plan from a different development group to repurpose the entire building because the per-square-foot cost was too high.

The plan commission unanimously endorsed the land sale. “I just really like the premise,” said commissioner Catrina Crane of the housing-library integration. The development would be the fifth such pairing.

The Common Council still needs to approve the land sales.

A temporary library, funded in the 2023 budget after substantial debate, is to be opened while the new facility is built. A raze permit is pending to demolish the current structure. 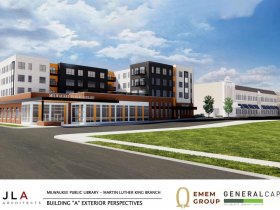 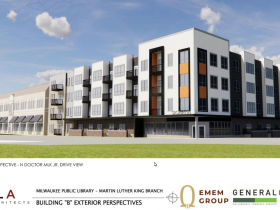 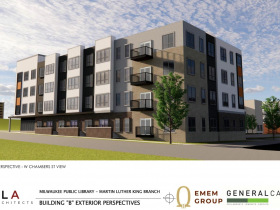 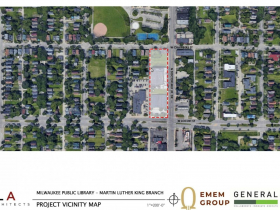 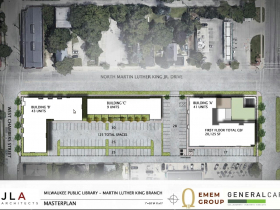 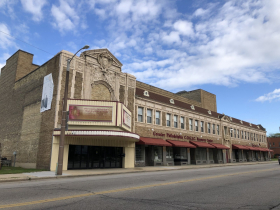 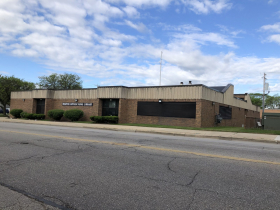 3 thoughts on “Eyes on Milwaukee: After Years of Delay New King Library Coming”