Alaska's experience offers fascinating lessons for those who care about democracy.

Voters at the Humboldt Park Pavilion. Photo by Jeramey Jannene.

So-called ranked-choice voting (RCV) has recently received increasing attention among election reformers, The hope is that it would help reduce political extremism and produce a result that better reflects the consensus of the voters.

This interest extends to Wisconsin. A bill was introduced in the recent legislative session to switch to RCV. The bill died with the end of the session, with no action taken.

So far only two states—Alaska and Maine—have adopted RCV for elections for statewide office. A number of cities, including New York, and other bodies have adopted it for some or most of their boards and other offices.

In the United States, the most common rule is that the candidate with the highest vote total—the plurality—wins. In most states, there is no requirement that the winner receive the majority of votes. In a partisan election, each party holds a primary to determine which candidate will represent that party. A general election is then held to determine which party’s candidate is the winner.

The details of RCV elections vary from one jurisdiction to another. However, last November’s election in Alaska illustrates how it might play out in practice.

First, Alaska held a primary among all the candidates. Because Democrats, Republicans, and members of other parties were on the ballot together, the vote was called a “jungle” primary. The top four vote-getters qualified for the general election in November. An image from the ballot is shown below. Note that three of the candidates, including the incumbent senator, Lisa Murkowski, were Republicans.

Voters were asked to rate each candidate.

The left-hand column in the next chart shows the initial count of the first choice among the four candidates. Murkowski barely led, attracting 114,118 first place votes, to Kelly Tshibaka’s 112,101. Tshibaka was the official candidate of the state Republican party. As an article published in National Review before the election reported:

“Republican voters are again unhappy at her pro-choice stance and at a number of her votes in the Senate, including breaking with the party to vote against the confirmation of Brett Kavanaugh, for the confirmation of Ketanji Brown Jackson, and for the second impeachment of Donald Trump. Trump, being Trump, has sworn vengeance.”

In ranked-choice voting, the candidate with the least number of votes—in this case Buzz Kelley—is eliminate and his or her votes distributed among the remaining candidates according to their 2nd place choice. The middle column shows the result.

As a result, the gap between Murkowski and Tshibaka almost disappears, dropping from 2,000 to 450. This is not surprising, since it is likely that many of Kelley’s voters are loyal Republicans.

In Round 3, the next lowest candidate—the Democrat Patricia Chesbro—is also eliminated. Most of her votes flow to Murkowski, putting her ahead by almost 20,000 votes and re-electing her. 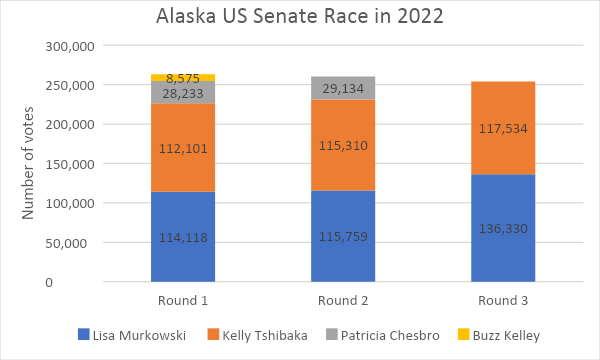 Did ranked-choice voting save Lisa Murkowski? The evidence seems to suggest this. However, this is not the first time she has broken with the Republican establishment and lived to tell about it. In 2010 she lost the Republican primary and won as a write-in candidate, a strategy often attempted but seldom successful.

A second series of elections affected by the Alaska ranked-choice law was two votes for Alaska’s sole member of the U.S. House of Representatives, the first to serve out the last few months of the late Don Young’s term and the second for the new two-year term.

Shown below is the part of the ballot that collects voters’ preferences with respect to the four Congressional candidates. As with the Senate race, three of the candidates are Republican, but the outcome was quite different.

The chart below summarizes the three rounds that identified the winner of the contest for the full House term. As shown by the first column Mary Peltola received the largest share of first choice votes but fell slightly short of a majority. In the rounds that followed, two of the three Republican candidates were eliminated, giving her 55% and the victory.

Peltola’s victory was aided by voters who selected Nick Begich as their first choice, but then put Peltola ahead of Sarah Palin, his fellow Republican. Apparently Begich and Palin spent much of their campaign attacking each other, which may have turned off some supporters of Begich. 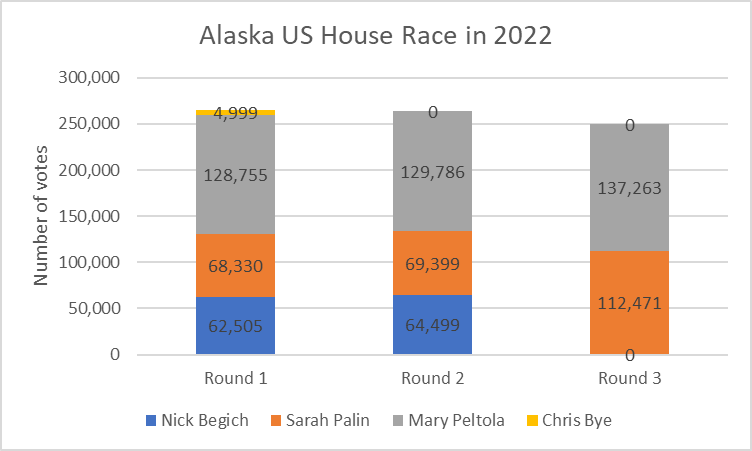 Most of the opposition to the ranked-choice voting has come from Republicans. For example, an article in National Review is entitled “Jungle Primaries and Ranked-Choice Voting are Bad. Combining Them Is Worse.” The author of this article seems particularly offended that in the race to fill out Don Young’s term, 60% of the first choices went to Republicans, yet the victory went to a Democrat.

Likewise, the Wisconsin Institute for Law and Liberty recently issued a report that dismissed the advantages of rank-choice voting. These reports, along with overwhelming opposition from the Republican establishment in Maine, Alaska, and other places to RCV, betrays an underlying belief by them that RCV would hurt Republican electoral prospects.

It seems unlikely that RCV is anti-Republican, but likely that it would force changes in both who could be a successful Republican candidate in a RCV environment and how those campaigns were run. Anyone who remembers Palin’s performance as John McCain’s running mate might be unsurprised that someone supporting the Republican Begich would reject his fellow Republican Palin in favor of the Democrat.

Two of the Republican candidates to replace Alberta Darling in the 8th state senate district are members of the state Assembly representing districts that are contained in Darling’s senate district. One of the two is Rep. Janel Brandtjen, who has emerged as the most persistent advocate of the proposition that Donald Trump won re-election in 2020 and that the election was stolen from him. Although Brandjen is a crackpot, she is the kind of crackpot that appeals to the most ideological of Republicans. Thus she is likely to win the Republican primary given that the district was gerrymandered to favor Republicans. As a result, she is likely to win the primary and the general election even though most voters in the district are unlikely to share her views.

A potential larger benefit, if the experience in Alaska is borne out elsewhere, is a possible change in campaign behavior. In a world where electoral success depends on voters’ second or third choices, negative campaigning may come with a heavy cost. In a ranked-choice world, the balance of power may shift to candidates who can bring people together, rather than those who capitalize on conflict and ideological purity.

One thought on “Data Wonk: Would Ranked-Choice Voting Reduce Partisanship?”