Slate of Foxconn Opponents Running for Mount Pleasant Board

Four candidates hope to gain a majority of the village board this spring.

By Evan Casey, Wisconsin Public Radio - Jan 4th, 2023 07:19 pm
Get a daily rundown of the top stories on Urban Milwaukee 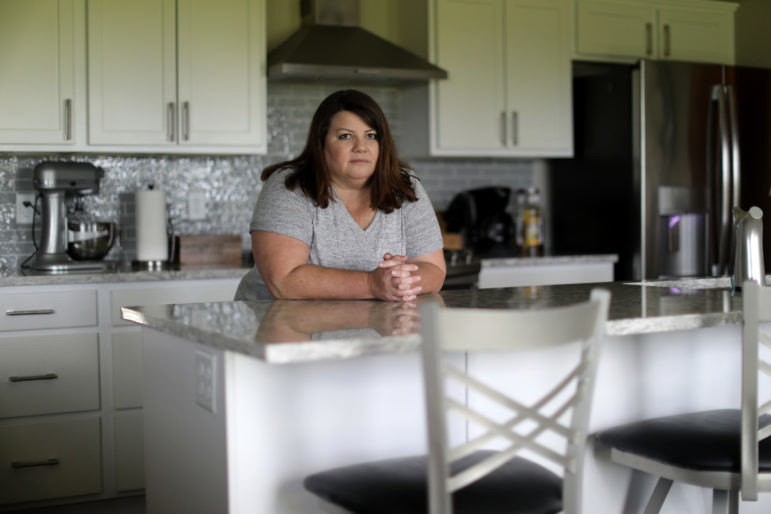 Kim Mahoney and her family have not accepted an offer from the village of Mount Pleasant, Wis., to sell their new home and property to make way for the Foxconn plant. Mahoney says several of her neighbors were pressured into selling their homes for road widenings that are no longer planned. She is seen in the kitchen of her home on July 1, 2019. Coburn Dukehart/Wisconsin Watch

Local opponents of Mount Pleasant’s Foxconn project are looking to change the direction of the community’s village government.

The local watchdog group A Better Mount Pleasant has been lobbying against spending related to the development for years. Now the group is running a slate of candidates, hoping to create a majority on the village board, while unseating Village President Dave DeGroot, who has been a vocal supporter of Foxconn.

“This is our chance to have a majority and to really transform the village in ways we know residents to want to see,” said Kelly Gallaher, who is running against DeGroot.

Gallaher, spokesperson for A Better Mount Pleasant, has been one of the more vehement opponents against Foxconn.

“While all of us had big hopes for it when it was first announced, it has failed, and it’s really left Mount Pleasant holding the bag in terms of debt and bonding for this project,” she said.

Foxconn initially planned to invest $10 billion on a large flat-screen manufacturing plant in Mount Pleasant and employ 13,000 people. Those plans never came to fruition, and a far smaller manufacturing facility now operates on the site.

Kim Mahoney owned the last home on the Foxconn development area with her husband. She is now is running for a seat on the village board alongside Gallaher.

According to A Better Mount Pleasant, the village, Racine County and the state have spent $200 million on land purchases, $185 million for water and sewer, $140 million for electric and power storage and $225 million for roads for the Foxconn project.

“We do want to get control of the amount of money that continues to be spent on the project and see if we can pull back some of the spending or eliminate some of it,” Mahoney said.

Travis Yanke and Eric Martinez will also be on the ballot April 4. The three village board candidates will be running against incumbents Nancy Washburn, John Hewitt and Ram Bhatia.

DeGroot has been village president since 2017. He and Gallaher have clashed during public meetings in the past.

Months before Gallaher announced her run for office, the Mount Pleasant Village Board attempted to lengthen their terms from two years to three years through an ordinance. Gallaher blocked that move by gathering more than 1,200 signatures to force a referendum on the issue. That led the village board to repeal the ordinance.

Gallaher said A Better Mount Pleasant has been searching for and recruiting potential candidates for about six months.

“This has been a process of … looking for good candidates who were willing to sort of take on the mess that this village board has left us in,” Gallaher said, adding that she believes the Foxconn project is a “failure.”

The state reworked its contract with Foxconn in 2021, scaling it back from the original pact signed in 2017 by former Gov. Scott Walker that would have given nearly $3 billion in credits to the company, which was promising to hire 13,000 employees. The current pact — reworked after Foxconn acknowledged it would not move forward on its original plans — offers up to $80 million for 1,454 jobs created by 2024.

But critics, including Gallaher, are worried that the company could leave Mount Pleasant as soon as it finishes receiving state tax credits.

Mahoney said if elected, she plans to make sure Foxconn or other future village developments on the site are accountable to village officials and taxpayers.

“I am looking forward to ensuring that if we have development that affects residents and their homes in the future, that we do it in a very respectful way,” Mahoney said.

Documents show Foxconn created 768 jobs in 2021 and made roughly $77.4 million in capital investments at its facility. In November, Foxconn qualified for $8.57 million in tax credits for the 2021 fiscal year. That total includes $3.5 million for meeting a job creation target and $5.07 million for capital investment, according to documents obtained through an open records request. The company qualified for $28.8 million in state subsidies for the 2020 fiscal year.