How Democratic Are State’s Smaller Cities?

Across the state they are always more Democratic than the rest of the county. 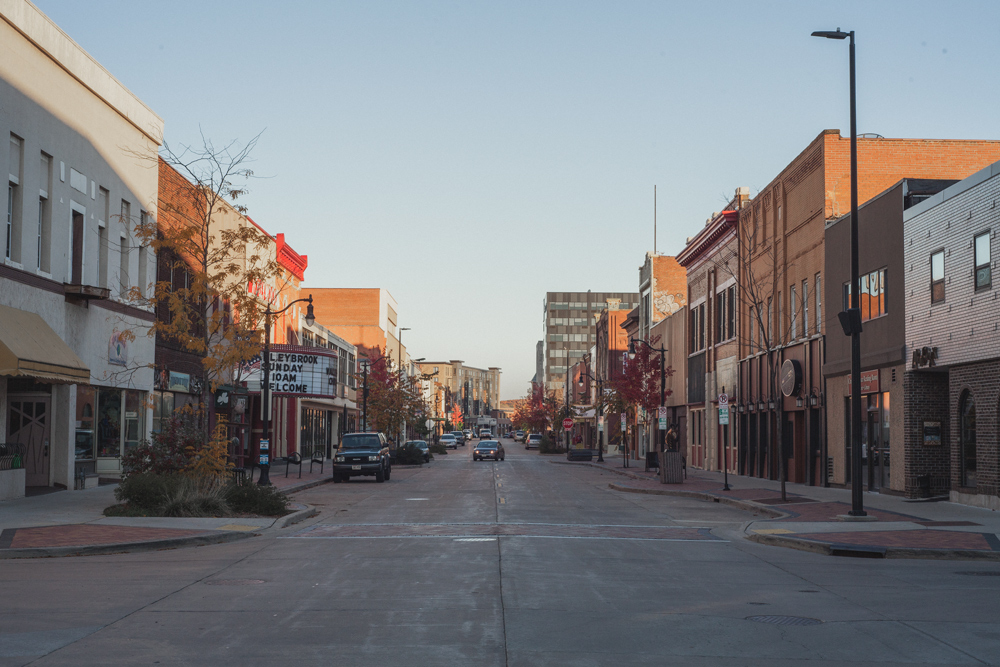 Last month, a Data Wonk column looked at voting and population density in the Greater Milwaukee area. It found a very strong correlation between the distance to Milwaukee and the partisan vote in other municipalities in Southeast Wisconsin—the towns, villages, and cities in Milwaukee, Waukesha, and Ozaukee counties. The greater the distance from the City of Milwaukee, the higher was the Republican share of the 2022 vote for governor.

The question arises, then, is whether this phenomenon is unique to Milwaukee. Are Wisconsin’s smaller cities more Democratic than the counties in which they sit? The analysis started with Wisconsin’s 30 largest cities. Ten of these were eliminated because they were suburbs of Milwaukee, Madison, or Waukesha, leaving the 20 shown in the chart below.

In the chart each dot represents a city/county combination. Each dot is labeled with a single name if the city and county share the same name. Where the names differ, the city name is given first, followed by the county name.

The left-hand scale on the chart shows the percentage of the city vote that went to the Democratic candidate for governor. For example, 65% of voters in the city of Eau Claire voted for Tony Evers.

The scale across the bottom shows the percentage of the vote from people in Eau Claire County (excluding city voters) who voted for the Democratic candidate. For example, 47% of Eau Claire voters outside the city limits voted for Evers.

This analysis ignored write-in and third-party votes. Doing so allows the Republican vote to be calculated by subtracting the Democratic share from 100%. Using the previous examples, Evers opponent Tim Michels received 35% of the Eau Claire city vote and 53% of the county vote outside the city limits.

The dashed red line is the diagonal. If any city had the same partisan voting percentages as its county that city would have fallen on that line. That all 20 cities fall above that line reflects the fact that every one of the twenty cities is more Democratic than its surrounding county–on average about 9% more. 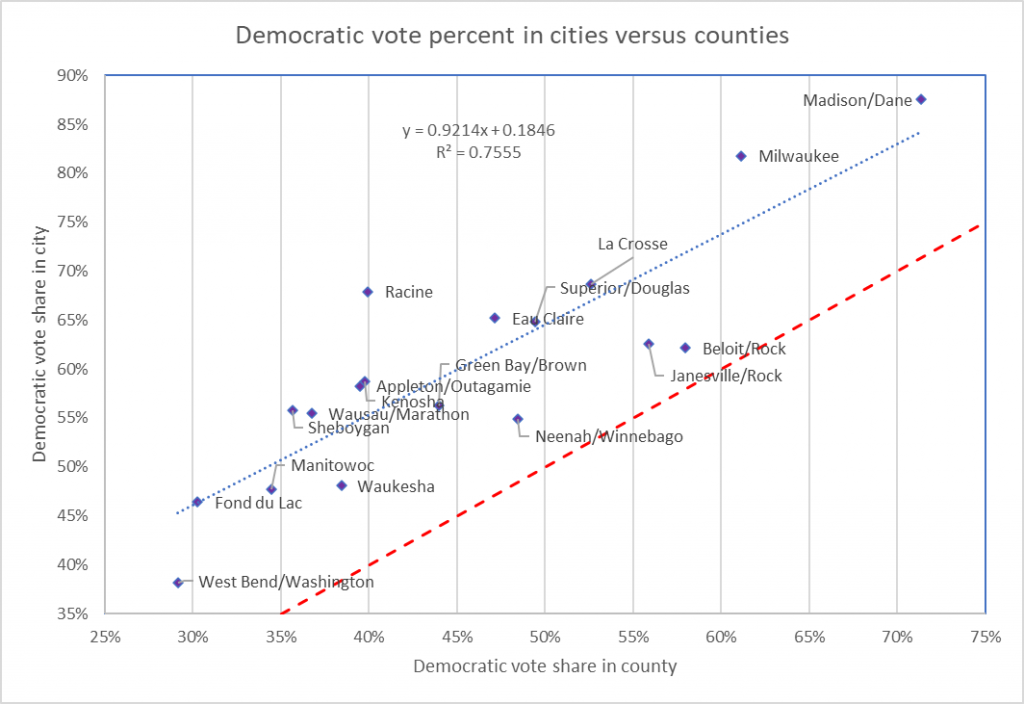 In only four of the 20 cities did a majority vote for the Republican candidate. Yet, well over half the counties supported the Republican. Wisconsin has become an example of the “big sort,” the phenomenon in which Democrats predominate in cities but become scarcer as population density declines.

But this does not mean that there are no Democrats in less populated areas or that there are no Republicans in cities. In heavily Republican Waukesha County, for instance, 40% of the voters chose the Democratic candidate. In fact, Waukesha County contributed the third largest number of Democratic votes of all Wisconsin counties. Likewise, Milwaukee and Dane counties were second and third in the number of Republican votes. It is a mistake to assume that residents of a place that consistently votes Republican are all Republicans. Likewise, that a place that consistently votes Democrat has only Democrats.

Consider the responses on the Marquette University Law Poll to the following question: “Do you favor or oppose the recent U.S. Supreme Court decision to overturn Roe v. Wade, thus striking down the 1973 decision that made abortion legal in all 50 states.” The next graph shows the responses, from registered voters who were willing to give an opinion, when cross-tabulated against the kind of community in which they lived: principal city, suburban core, exurbs and large towns, small town, or isolated rural. Certainly, a much higher proportion of city dwellers opposed the court’s decision striking down Roe than did those living in the country. Yet nowhere was the opinion unanimous. In fact, a majority in every one of the five environments opposed the decision. 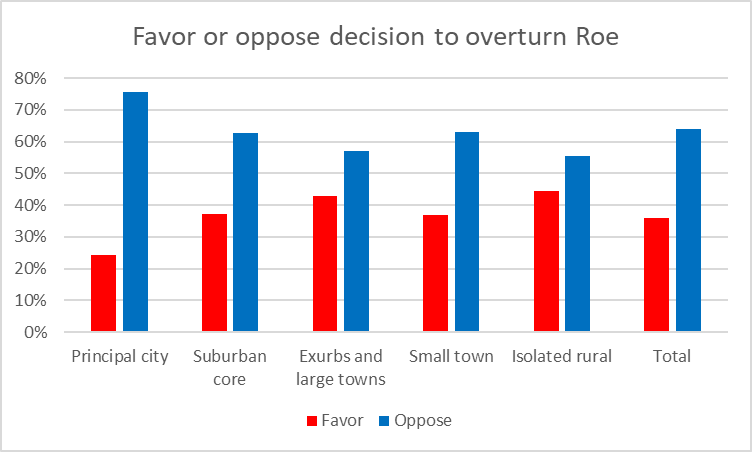 Now consider the responses from the same surveys with the same respondents when cross tabulated against their partisan political preferences, as shown below. Compare this to how the same sample of more than 3,000 interviewees this current year are categorized according to their political orientation. 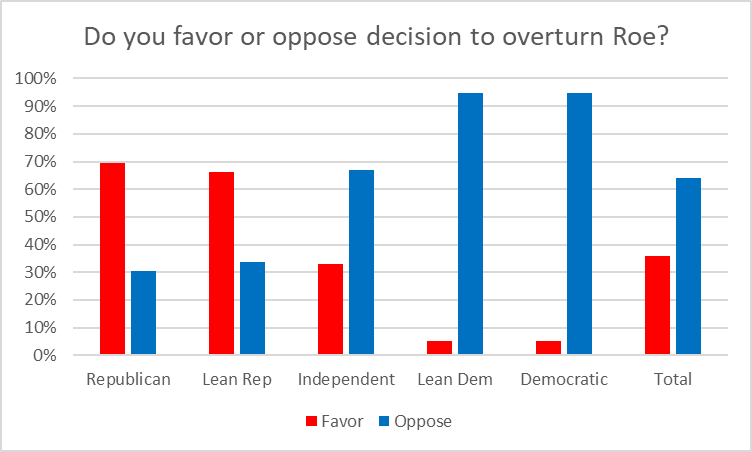 Do you favor or oppose decision to overturn Roe?

The generalization that the percentage of Democrats goes down as population density goes down is widely valid. But to assume that therefore there are no Democrats in small towns and rural areas is a fallacy. They constitute a sizable minority, but spread over such a wide area, they have little chance of influencing government policy.

Consider the average gerrymandered Assembly district made up of 40% Democrats and 60% Republicans. Since winning the Republican primary is the main key to electoral success, the representative is likely to be further to the right than his or her constituents. This helps explain the increasing polarization of American and Wisconsin politics. It also helps explain how Republican legislators in Wisconsin can back policies — such as their support of severe restrictions on abortion — that the majority of voters in the state oppose.