By Evan Casey, Wisconsin Public Radio - Oct 6th, 2022 05:44 pm
Get a daily rundown of the top stories on Urban Milwaukee 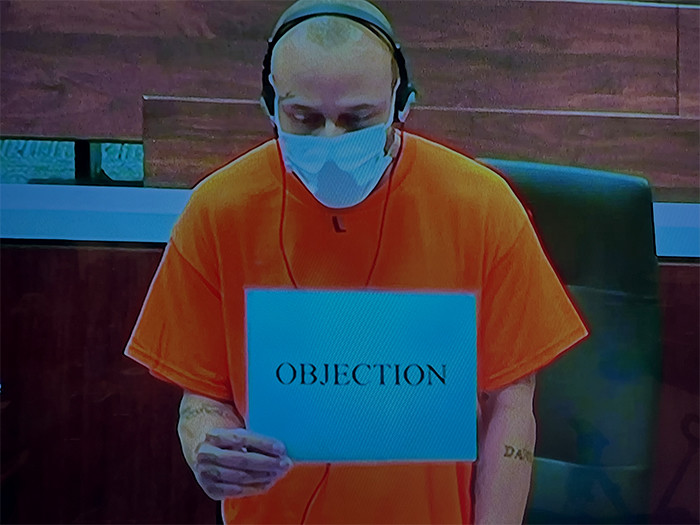 Darrell Brooks Jr. is shown on a monitor in the media room of the courthouse holding up a sign that says, “objection.” Evan Casey/WPR

The opening arguments in the trial for the accused driver in the Waukesha Christmas Parade Tragedy began Thursday after three days of jury selection and proceedings and a seemingly endless back and forth between the defendant and the judge.

Some in the courtroom cried as the Waukesha County District Attorney’s Office read off the names of the six people who died on the day of the tragedy.

“It sounds corny, but I think you’ll see from the videos there was a sense of joy in the air,” Wittchow said. “Darrell Brooks killed that joy. He replaced it with terror and death.”

Wittchow said the state would show “dozens” of videos and bring witnesses that’ll prove that Brooks was the driver on that day.

“The evidence is going to show that Mr. Brooks left behind a trail of carnage and chaos as he made his way down Main Street, through the parade route,” he said.

The state plans to bring several witnesses and police officers to testify about what they saw on Nov. 21, 2021, including a police officer who tried to stop Brooks’ vehicle.

“He tried to stop the defendant but there’s only so much a man can do against an SUV,” Wittchow said during his 35 minute opening statement.

The DA’s office also plans to show the jury of 16 the red SUV which Brooks was allegedly driving. They’ll also try to prove that Brooks chose to speed up when he drove through the parade route.

Wittchow added that they won’t bring in every witness to testify, as they want to avoid duplication of evidence and “undue hardship” on the many victims.

The victims from the incident are:

On Thursday morning, Brooks, 40, arrived to court wearing an orange prison jumpsuit. Multiple rows in the courtroom were filled with victims from the incident.

Waukesha County Circuit Court Judge Jennifer Dorow asked him if he’d like to change into a suit and tie, as he had worn a suit and tie earlier in the week.

“This court has taken a number of steps to shield from this jury that you are in custody,” Dorow said.

“At this point your honor, who doesn’t know that I’m in custody,” Brooks said to Dorow.

Brooks is representing himself at the trial after Dorow approved his request to do so last week. Since jury selection began Monday, Brooks has been combative and disruptive in court. With the jury now set and opening arguments set to begin, he continued to interrupt the judge nearly continuously Thursday morning. He was removed from the courtroom and placed in an adjacent courtroom within 10 minutes — a tactic that’s been used by Dorow several times already throughout the week.

Brooks then proceeded to remove his shirt and face away from the camera while appearing on a livestream video. Waukesha County District Attorney Sue Opper maintained that she believed Brooks was mentally competent to stand trial and also to represent himself, adding that she said Brooks was “coherent” and “intelligent.”

“We are 100 percent convinced that these actions by Mr. Brooks are intentional,” Opper said, adding that she believed this was another delay tactic by Brooks.

“He is attempting to derail these proceedings and delay the inevitable,” she added.

Dorow said there were four mental status reports done regarding Brooks’ prior insanity plea, which he withdrew. Those were labeled as “confidential” by the court, according to online court records.

Dorow said she believes his behavior is more in line with someone who is “defiant.”

“It is the sole intent of Mr. Brooks to make a mockery of this process,” Dorow said.

The jury, which includes 10 men and six women, all white, were brought into the courtroom Thursday morning as Dorow read off the jury instructions. While the charges against Brooks were being read, Brooks held a sign which read “objection” while in an adjacent courtroom.  It took Dorow more than three hours to read off all the charges and penalties for Brooks.

Dorow and Brooks again spared about objections Brooks made Thursday, as Brooks has asked several times about the jurisdiction of the court. Dorow has said she doesn’t believe she needs to discuss those objections.

If Brooks is found guilty on just one intentional homicide charge, it could result in a sentence of life in prison.