State’s Black applicants half as likely to get unemployment aid as whites, federal audit finds.

By Jacob Resneck, Wisconsin Center for Investigative Journalism - Jun 21st, 2022 02:28 pm
Get a daily rundown of the top stories on Urban Milwaukee 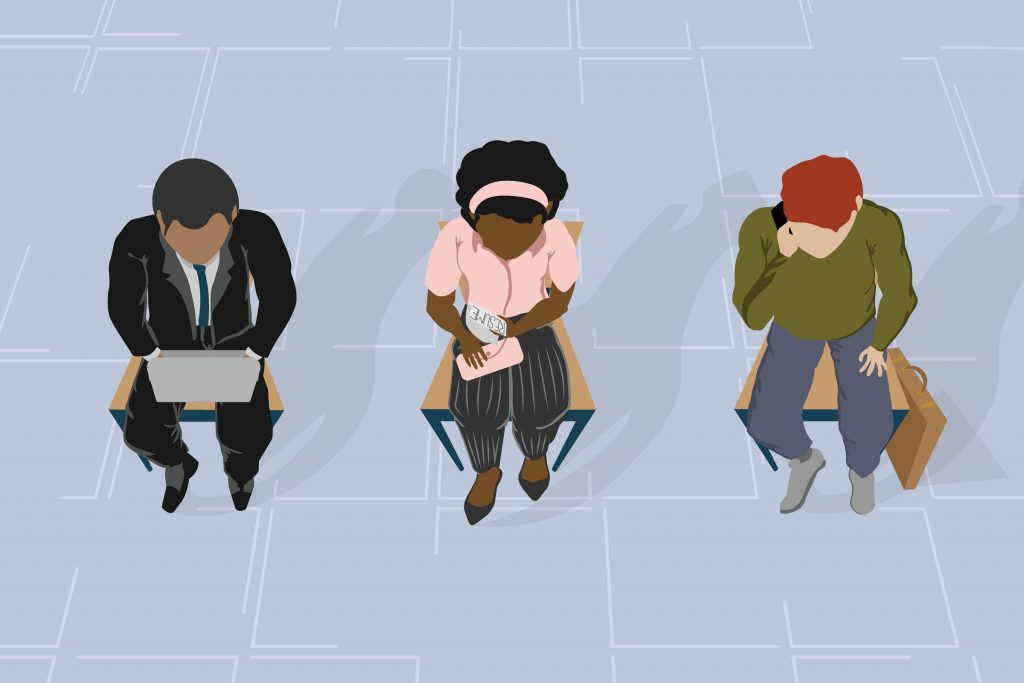 A report by the federal Government Accountability Office found that Wisconsin was among the slowest to begin paying federal pandemic unemployment relief, and whites received compensation at twice the rate of Black claimants. (SDI Productions via iStock)

A federal audit has uncovered what researchers into Wisconsin’s unemployment insurance system have long suspected: People of color are less likely to receive jobless compensation than their white counterparts.

The Wisconsin Department of Workforce Development previously told Wisconsin Watch that it lacked data to know whether its systems might favor some groups over others, such as producing different outcomes around racial lines.

But a June report by the Government Accountability Office — a nonpartisan watchdog that reports to Congress — found that Wisconsin was among the slowest to begin paying federal pandemic unemployment relief, and whites received compensation at twice the rate of Black claimants. Native American and Hispanic applicants were also less likely than white claimants to receive help.

The report examined how Wisconsin and four other states — Arizona, Louisiana, New York and North Dakota — implemented Pandemic Unemployment Assistance (PUA). Congress created the program in 2020 to aid self-employed and part-time workers who lost work but wouldn’t otherwise qualify for regular compensation. It has paid out at least $131 billion nationwide.

Percentage of PUA Applicants Receiving Benefits in Selected States, by Race and Ethnicity

The pandemic struck after Wisconsin’s Republican-led Legislature spent years toughening rules for accessing unemployment benefits — in the name of reducing fraud — and leaders in both parties failed to upgrade antiquated computer systems that cannot answer phones and print compensation checks at the same time.

It took Wisconsin two months to begin distributing PUA following Congressional approval. DWD reported making its first payments on May 21, 2020, but paid fewer than 1,000 claimants by the month’s end, according to the GAO.

Only North Dakota (34.8%) granted a lower percentage of overall claims compared to Wisconsin (38.1%). The two states also saw the most severe racial disparities in payouts, the audit found.

The figures add to a lengthy list of racial disparities in Wisconsin, which has some of the country’s starkest inequities in education, public health, housing, criminal justice and income. 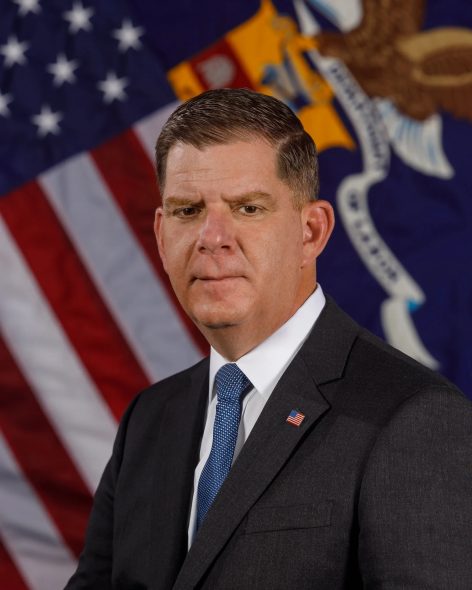 People should receive unemployment benefits based on need and not “because of the color of their skin,” says U.S. Secretary of Labor Marty Walsh. (Courtesy of U.S. Department of Labor)

People should receive unemployment benefits based on need and not “because of the color of their skin,” U.S. Secretary of Labor Marty Walsh told Wisconsin Watch. “We have to be equal across the board.”

He says the Labor Department welcomes the audit and is looking into its recommendations.

“One of the things that we’re doing, quite honestly, is acknowledging and identifying the challenges that we see in the system,” he added.

One of those recommendations is for President Joe Biden’s administration to study what happened in the early months of the pandemic to help states avoid future snafus.

The Labor Department agreed with a GAO recommendation to advise Congress on future options to help unemployed freelancers and other contingent workers. It partially agreed with the audit’s call to examine the reasons for racial disparities in pandemic aid, but expressed concern that doing so would distract from other efforts to improve equity.

“Officials stated that their IT system does not capture the reason for denial of claims, and that they would need to examine each PUA application manually,” the report said.

But the GAO identified language barriers in Wisconsin and other states for claimants who don’t speak English. The PUA online application was only available in English, forcing those needing translation help to phone call centers that were overwhelmed early in the pandemic.

Late last week, DWD announced a $3 million “UI Navigator” partnership with United Migrant Opportunity Services to boost aid access to migrant and seasonal farmworkers workers, non-English speakers and other workers who face persistent poverty and inequality. The federal Labor Department is funding the partnership, along with similar new programs in six other states.

“The Department of Workforce Development strives to make Wisconsin a fair and just place for all people to live and work. This includes eliminating racial and ethnic disparities while advancing equity and economic opportunity through workforce development,” Jennifer Sereno, a DWD spokesperson, said in a statement that called PUA “a new federal program with entirely distinct eligibility criteria.”

Sereno added: “Disparate access to information, technology, documentation, and challenges with validating applicant information can affect the implementation and outcomes of support programs.”

Critics of Wisconsin’s approach to unemployment insurance have warned of such barriers for years. 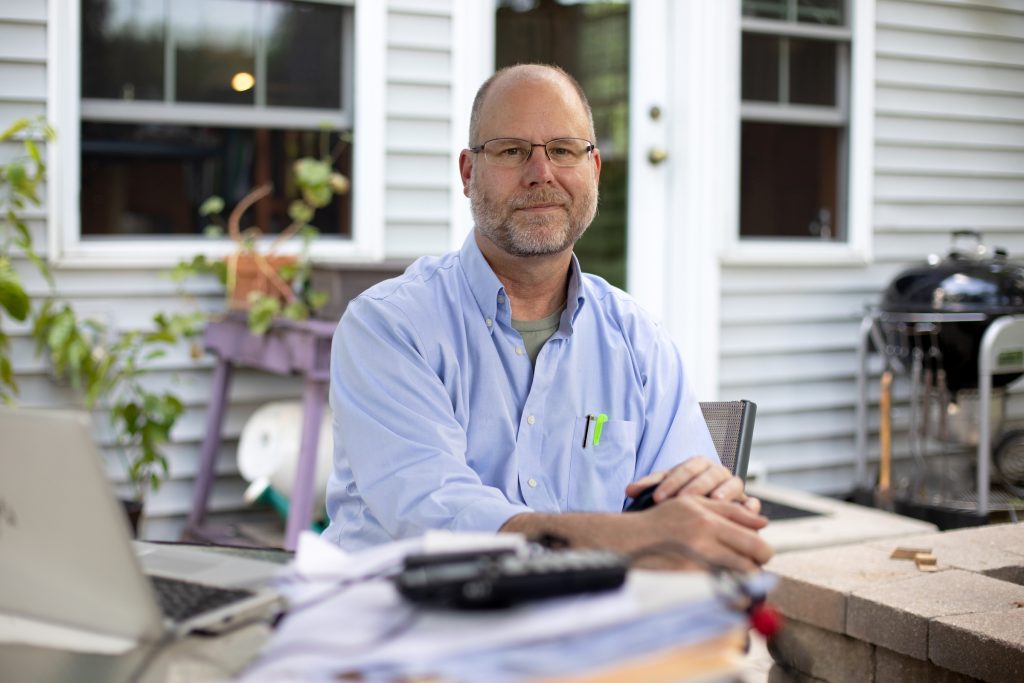 Victor Forberger, supervising attorney for the University of Wisconsin’s Unemployment Compensation Appeals Clinic, works from his home in Madison, Wis., on May 26, 2020. Wisconsin’s complex claims filing process might explain some of the racial disparities that a Government Accountability Office report found in examining how the state distributed federal pandemic aid to the jobless. (Coburn Dukehart/ Wisconsin Watch)

“The claim filing process in Wisconsin is incredibly difficult,” he told Wisconsin Watch. “It’s set up as a bunch of hoops and obstacles that people have to jump through.”

DWD in late 2020 announced a plan to simplify application language, which Forberger says falls short. And it recently updated its online claimant portal that allows people to submit documents online instead of mailing or faxing them.

The agency says it also aims to ease filing for people without internet access. DWD has also taken initial steps to update its 1970s-area IT system, but doing so is expected to take years and cost about $90 million.

Forberger said the federal government requires state unemployment systems to avoid discriminating against people with disabilities, people of color and those who don’t speak English.

The nonprofit Wisconsin Watch (www.WisconsinWatch.org) collaborates with WPR, PBS Wisconsin, other news media and the University of Wisconsin-Madison School of Journalism and Mass Communication. All works created, published, posted or disseminated by Wisconsin Watch do not necessarily reflect the views or opinions of UW-Madison or any of its affiliates.

One thought on “Huge Racial Gap for Pandemic Jobless Aid”