The Rise of José Pérez

By Edgar Mendez, Milwaukee Neighborhood News Service - May 14th, 2022 12:11 pm
Get a daily rundown of the top stories on Urban Milwaukee 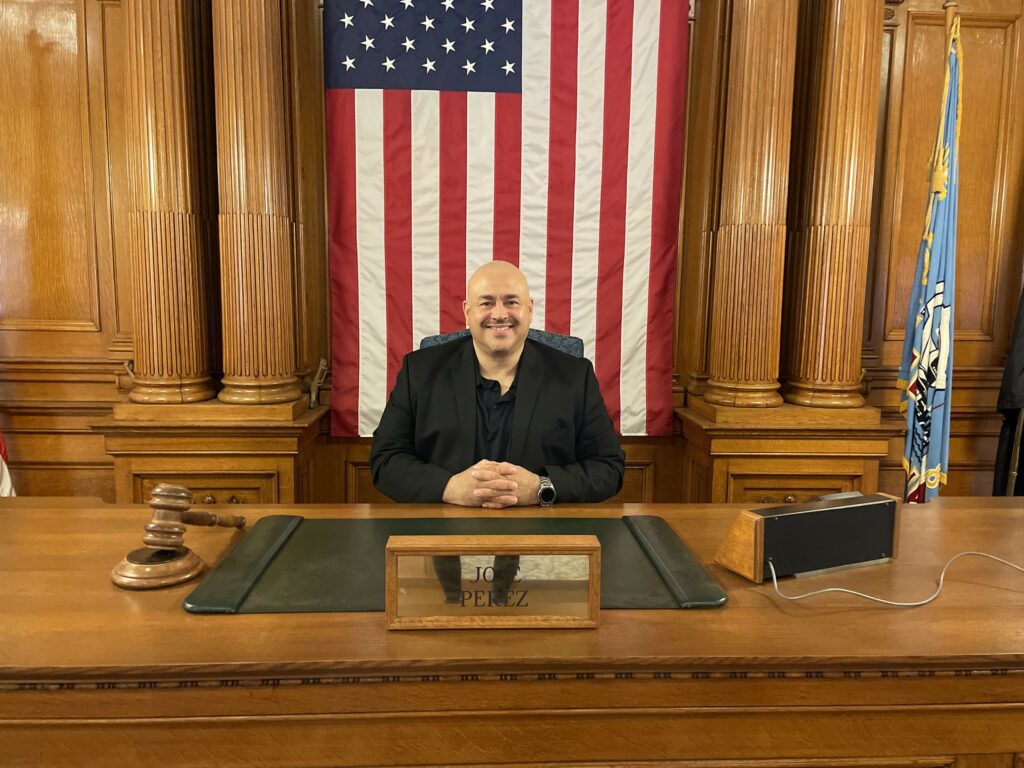 José Pérez, 53, the first Latino Common Council president in the city’s history was raised on the South Side. Photo by Sue Vliet/NNS.

“I feel it and welcome it. It’s an awesome honor to be the first,”  Pérez said. “But it won’t mean much if I don’t do a good job.”

Pérez, 53, was voted in unanimously by peers on the Common Council on April 19, succeeding Cavalier Johnson, who was elected mayor earlier that month.

Among the many challenges the Pérez faces in his new role, he said, are to re-energize and refocus the council to tackle major issues, including reckless driving, public safety and the aging infrastructure in the city.

“These are topics that cross all boundaries that we need to unify on,” Pérez said.

He is also tasked with guiding the council to address the city’s growing fiscal crisis. Pérez said costs have gone up while revenue has decreased. Balancing the budget with federal dollars, such as pandemic aid, is not sustainable, he added. One solution, he said, is for an increase in shared state tax revenue or to create a new sales tax in the city.

We need to “work with the state and figure out how they can be more helpful,” he said. “I don’t want to cut any core services.”

Local and state leaders have pushed officials for years to increase the amount of state tax revenue that comes back to Milwaukee, where most of those taxes are collected. They’ve also requested a change in state law that would allow municipal taxes as a means to generate revenue.

JoCasta Zamarripa, alderwoman for the 8th District, said Perez has the ability to help bridge the fractured relationship between the city and state. She’s seen him do it before at the city level.

“He’s that member who will reach out and talk to all of us,” she said. “Even when there might be bad blood, José’s good about setting that aside for the good of the council and the good of his constituents.”

Pérez, who is married and has two teenagers,

said the ability to build relationships, even when people have philosophical or personal differences, goes back to the fundamentals of organizing.

He first honed that skill as a volunteer community organizer working on landlord and other issues for Milwaukee Inner-City Congregations Allied for Hope, or MICAH, an interfaith organization that addresses justice issues in Milwaukee.

“You make no assumptions about people; you sit down and learn what’s important to them,” Pérez said. “You go down the road with someone and build that relationship, then you ask them to either trust you or you’re figuring out how you can work together.”

Pérez, who dropped out of Pulaski High School in 1986 and quickly earned his GED, built relationships as an organizer for years before being drawn into politics. That trajectory began when he enrolled in Cardinal Stritch University in the mid- 1990s. At the time there was no political science major at the school, but Pérez took those classes anyways.

In between classes he spent one summer interning for U.S. Rep. Jerry Kleczka, D-Milwaukee, in Washington D.C., through the Hispanic Congressional Caucus Institute, and another as an intern for former Milwaukee Mayor John Norquist.

Pérez then returned to his roots as executive director of MICAH, helping to establish the Good Jobs and Livable Neighborhoods Coalition, among other accomplishments. He also worked as a national field representative for the American Federation of Labor and Congress of Industrialized Organizations, or AFL-CIO, and had positions with the Department of City Development in Milwaukee. 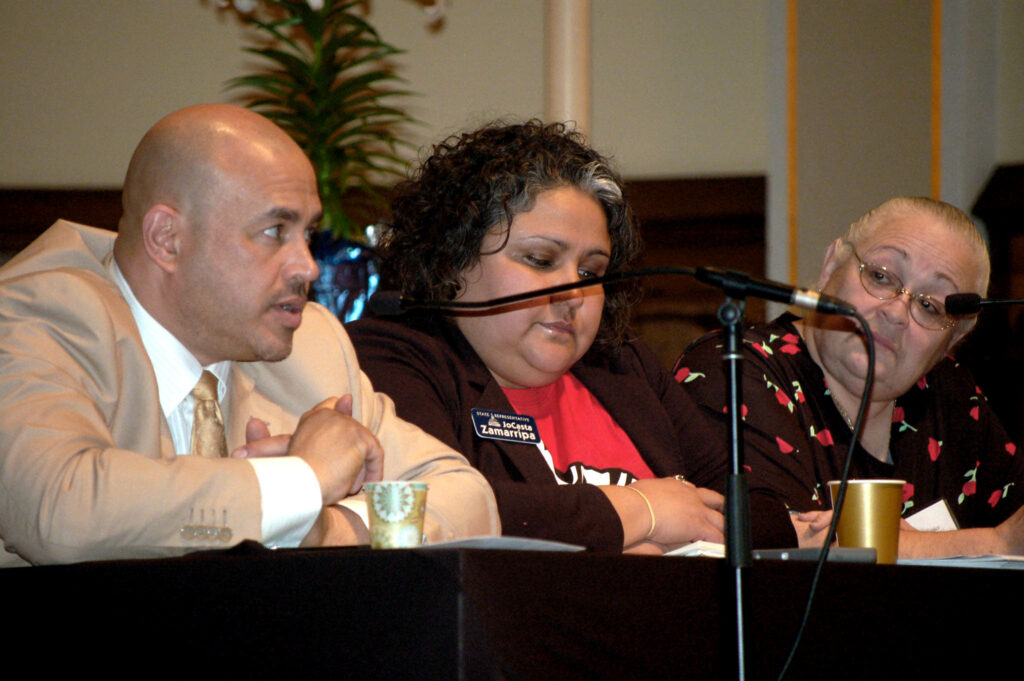 José Pérez sits next to fellow council member JoCasta Zamarripa during a forum regarding driver’s licenses for undocumented residents in 2015. File photo by Edgar Mendez/NNS.

Around 2012, his taste for politics returned and he ran for alderman of District 12 on the city’s South Side. It was around that time that Jesús Salas, one of the most respected activists in the Milwaukee Latinx community’s history, first met Pérez. Salas said at the time he was going door-to-door on the South Side to drum up support to recall former Gov.  Scott Walker when he noticed someone else hitting the pavement.

“He was knocking on doors, too,” Salas recalled. “I saw him on the streets daily talking to residents.”

Salas said he remains impressed by Pérez and said it’s obvious that his colleagues feel the same.

“Well, I think that was demonstrated by the fact that he was given the unanimous vote to become Common Council president,” Salas said. “They saw his performance during his time in the city and believed in him.”

His path to the top

Born in Milwaukee and raised on the city’s South Side by his Puerto Rico-born parents and grandparents, Pérez had a childhood much like many others in the neighborhood in the 1980s. He spent his time outside, played Little League baseball and shot hoops at different neighborhood playgrounds.

“I want it on the record that I beat him at basketball in the seventh grade,” Colón joked.

Colón and Pérez both attended St. Matthews School, now Prince of Peace School, on South 25th and West Scott streets. Even then, he said, Pérez was intense and serious about the rules and fair play. He said he knew Pérez would be successful.

“He always had that poise, and he was smart and always had something to tell you,” he said.

Colón said while he was the type of kid who never crossed Greenfield Avenue, Pérez ventured into other neighborhoods to play pickup games. As he traveled into different neighborhoods on the South Side, Pérez became more exposed to street gangs, which peaked in the city in the ’80s and  ’90s.

“When we grew up, it was tough, all the gangs over there at Kagel,” said Perez about the neighborhood around South 12th and West Mineral streets. “We witnessed some stuff that was kind of wild, and when it got hairy, you made your way home.”

His grandparents were his greatest influence, however.

“I have to go back to the beginning and give credit for that to my grandparents, how hard they worked and how humble they were,” said Pérez, who split his time between his parents’ house on South 10th and Washington streets and his grandparents’ home on South Fifth and West Pierce streets.

His grandmother, Celine Arce, worked at a number of local factories, including a tannery, while his grandfather, José E. Pérez, made a career at Grede Foundries in the Walker’s Point neighborhood. Pérez said his grandfather worked on molds at Grede until his body would no longer allow it. He moved to doing janitorial work for the company until he retired.

“He kept his head down and took care of his family,” Pérez said.

Pressures of being the first

With his values driving him, Pérez has his plate full when it comes to challenges.

Zamarripa said she sat down with Pérez and Alderwoman Marina Dimitrijevic recently to discuss issues related to neighborhoods without working streetlights.

“We can’t have them living in the dark,” Zamarripa said. “These streetlights are archaic and need to be replaced.”

It’s just another example of the many areas where residents have struggled and city officials can come together to find solutions.

“The challenges are huge but José is the type of person who can build consensus to solve them,” said Colón, who called Pérez the most influential Latino in the state.

He also believes that, in his new role, Pérez will influence the next generation of Latinos to aspire to reach new heights.

“There are a lot of kids that are coming behind us and the influence is going to be huge,” he said. “It’s really the biggest thing that’s happened in a while in the Latino community.”

Pérez said he hopes to be an example for others.

“There’s nothing that you can’t do if you really want to do it,” he said. “I hope that I can be inspirational for people.”