What Do Voters Think About Abortion?

In Wisconsin and nationally, it depends on your partisan views and particularly, your religion. 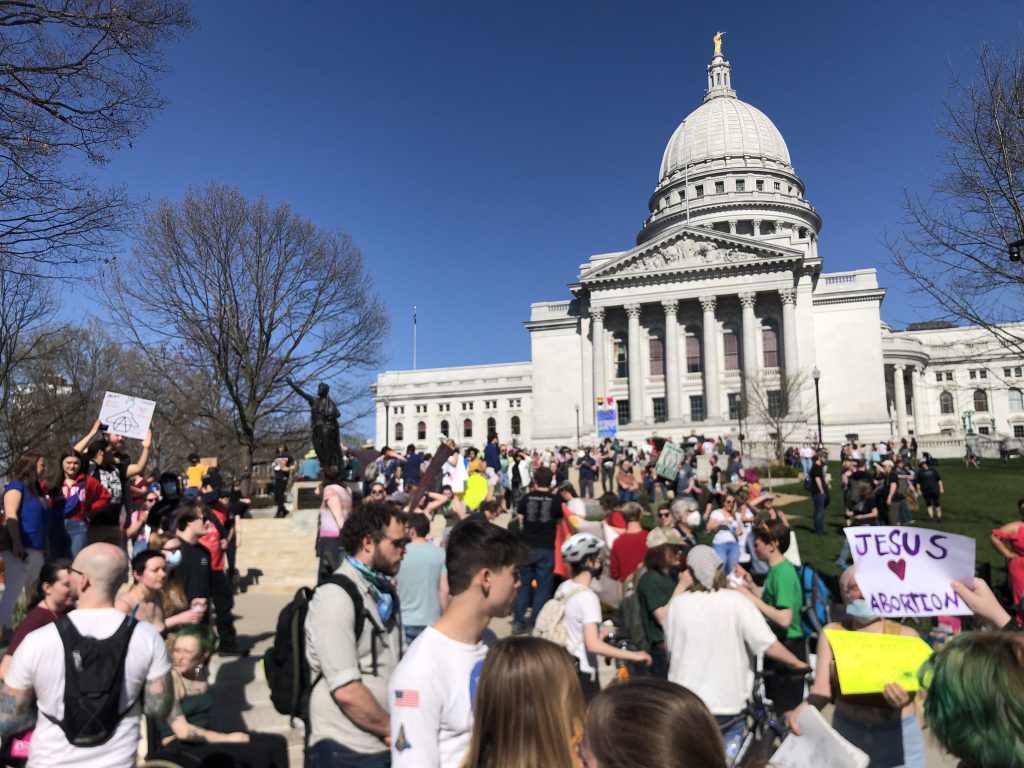 The findings of opinion polls on whether or not abortion should be legal have been remarkably stable over the years. This is reflected in the findings of the Marquette poll of Wisconsin voters, which has included a question on abortion eleven times between September 2012 and October 2021. The poll asks the voters to choose one of four answers related to the legality of abortion—whether it should be legal in all cases, legal in most cases, illegal in most cases, or illegal in all cases.

The graph below summarizes the responses in September of 2012, last October, and the total of all 11 surveys. During the past decade, more than 8,000 participants responded to the question. (For simplicity, I recalculated the totals excluding those who did not respond.) 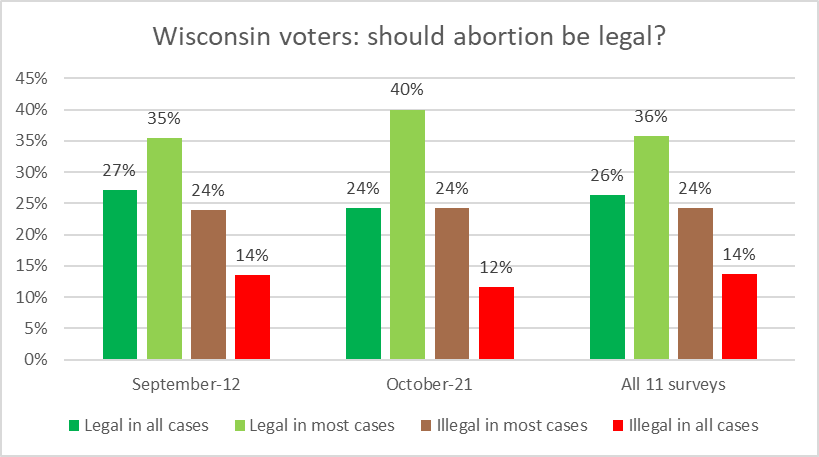 Wisconsin voters: should abortion be legal?

This seems obvious but in real life is easy to forget. Apparently, the bill that Democratic Senate leader Chuck Schumer plans to introduce has fallen into this trap.

Often, the first two responses and the last two are combined to get a picture of how many voters are generally supportive of the availability of abortion compared to those opposed. As the next graph shows, responses are even more stable when grouped this way. As the graph below shows, twice as many people favored legality as opposed it. 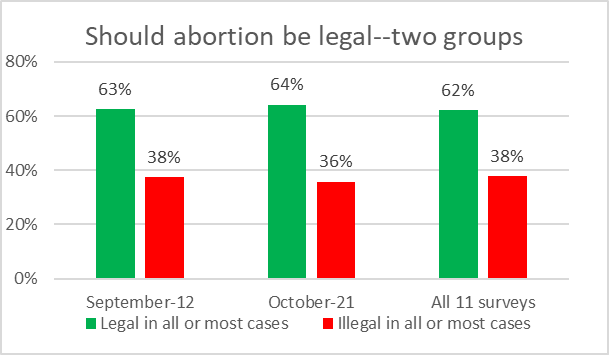 Should abortion be legal–two groups

Other polls of attitudes towards abortion reflect a similar stickiness. The results remain the same over time or change very gradually. On its website, Gallup has a plot showing the results of repeated polling between 1975 and 2021. During most of this period the percentage of respondents saying that abortion should always be illegal has been stuck at just under 20%. But it also shows a very gradual increase in the fraction saying abortion should always be legal, growing from 22% in 1975 to 32% last year.

The stability in abortion opinion stands in sharp contrast to gay marriage. Less than 20 years ago, a majority of state voters approved an amendment to the Wisconsin Constitution outlawing same-sex marriage. Today, despite some grumbling on the right, gay marriage is widely accepted in Wisconsin.

Another common poll question on abortion asks whether or not the voter would have the Supreme Court overturn Roe v. Wade. In a recently introduced second poll, Marquette uses this format. This poll focuses on assessing attitudes towards the US Supreme Court. It uses a national sample, rather than focusing on Wisconsin.

The next graph summarizes the results of these new national polls in January and March of this year. 70% of those responding expressed opposition to overturning Roe. 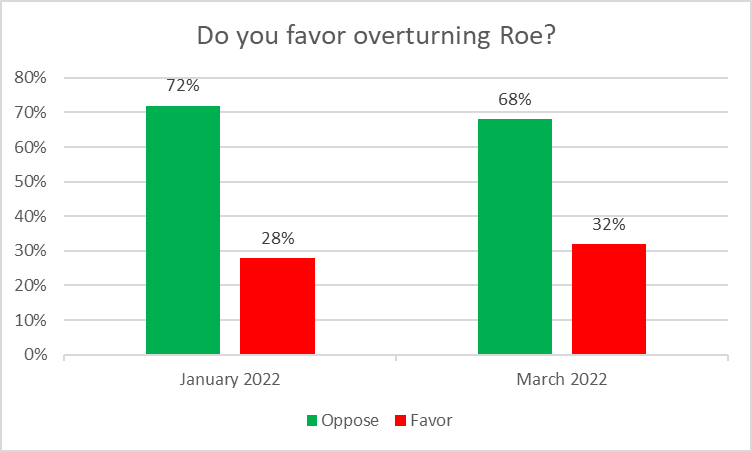 Do you favor overturning Roe?

It is well known that support and opposition to legal abortion is closely aligned with partisan politics. That can be seen in the next graph which compares the response to a survey by the Pew Research Center of the percentage saying abortion should be all or mostly legal to voting in the 2020 election. The higher the support for abortion (shown in vertical line at the left), the higher the vote for Joe Biden (the horizontal line). 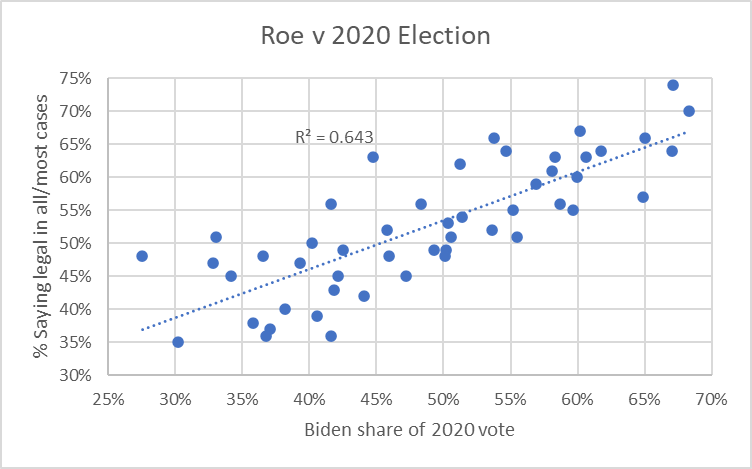 The issue of the legality of abortion presents a particular challenge to Republican politicians. Much of their base, and the most politically active part, is adamantly opposed to legalizing abortion. However, a majority of voters support the legalization. As the next graph based on the Marquette poll of Wisconsin shows, a third of self-identified Republicans—and nearly half of independents who trend Republican–also say they support legal abortion.

This helps explain why the immediate reaction to the leaked Alito draft by Republican politicians such as Mitch McConnell was to attack the leaker, rather than discuss the substance of the draft. They needed to change the subject.

Similarly, whoever vandalized the Madison offices of Wisconsin Family Action was serving the interests of Republican politicians by helping switch the story, from assuring the availability of safe abortions to the lawlessness of abortion supporters. 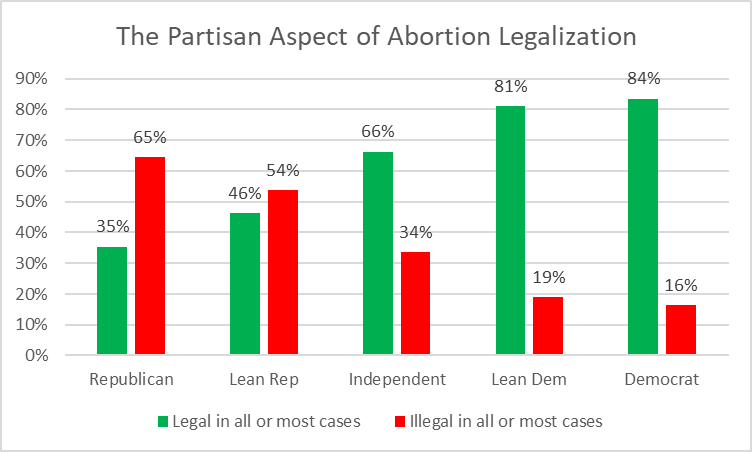 The Partisan Aspect of Abortion Legalization

This issue puts Republican politicians on the defensive. In most places they are trying to establish a scheme that most people reject. Even a substantial number of Republicans reject it, as the graph above shows: one third of self-identified Republicans support legalization of abortion in most or all cases.

One can already observe the Republican strategy: change the subject to outrage at the leak of Alito’s draft decision. Or direct outrage at people picketing various justices’ homes or vandalization of the offices of anti-abortion organizations. Unfortunately, there are those who seem intent on giving Republicans the ammunition they need.

In addition to the correlation between party identification and abortion views, there is a correlation with religion. In six of the 11 surveys in which the Marquette poll asked whether the voters thought abortions should be legal or illegal it also asked about the voter’s religion. The next graph summarizes the results. Note that 17% of the respondents reported that they were born again Protestants. (The other 4% did not answer.) 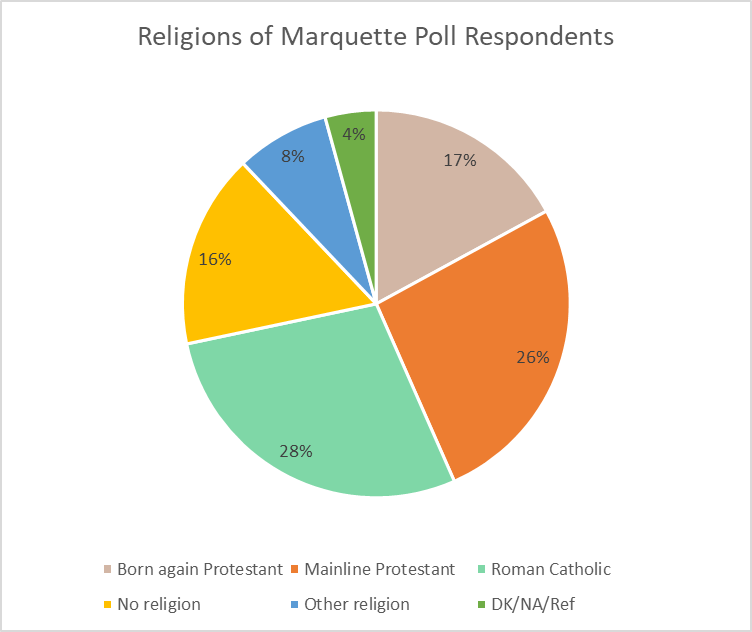 The next chart summarizes how members of these religious groups responded to the question as to whether they supported the availability of abortion in most or all cases. Born again protestants, 17% of the total sample, were the only group in which a majority thought abortion should be illegal. 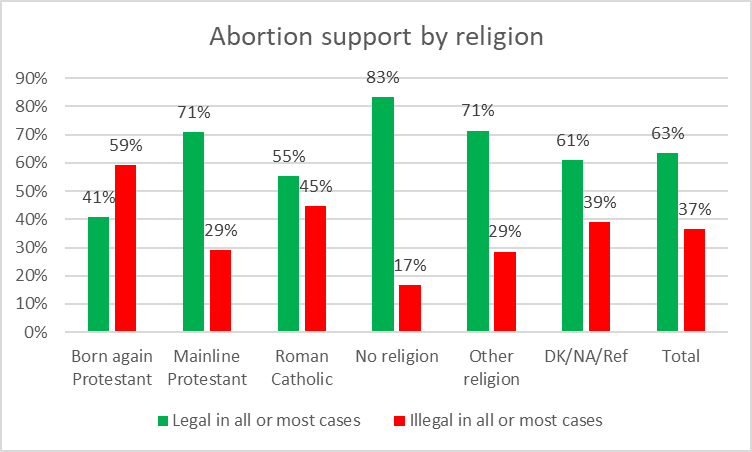 If, as widely expected, the U.S. Supreme Court reverses the Roe and Casey cases, which will result in a ban on abortion in Wisconsin, this could be viewed as a religious minority imposing its religious values on the majority.

The First Amendment of the U.S. Constitution prohibits the establishment of religion. Despite this, a relatively small group has successfully converted their religious beliefs into government policy, against the wishes of a majority of Americans. Underlying this is a fundamental belief that pregnant women cannot be trusted to make a decision about whether they should have an abortion. This could be a huge issue in upcoming elections.

3 thoughts on “Data Wonk: What Do Voters Think About Abortion?”