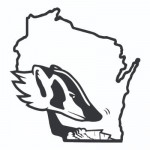 By Peter Cameron, The Badger Project - Apr 18th, 2022 12:58 pm
Get a daily rundown of the top stories on Urban Milwaukee 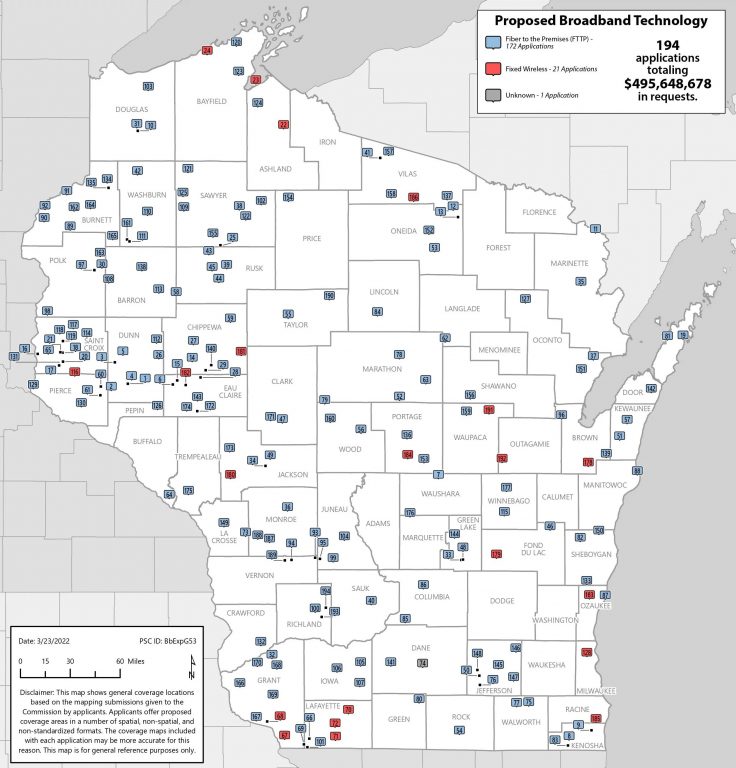 A map from the Wisconsin PSC documenting all the requests for broadband expansion grants in the current round.

Big telecommunications companies including Frontier and AT&T are asking the state for millions in the most recent round of broadband expansion grants, according to the list of applications submitted to the Wisconsin Public Service Commission.

Many of these companies have already received tens of millions from federal programs to improve service in Wisconsin and across the country. Critics are wary of giving them more public cash.

“My fear is that companies like Frontier, Charter and AT&T will simply use this money to substitute for their existing capital expenses,” Barry Orton, a professor emeritus of telecommunications at the UW-Madison, wrote in an email. “As they have multiple times in the past, they could cherry-pick service areas based on revenue expectations, leaving their less lucrative Wisconsin customers unserved and underserved yet again.”

Past federal programs like the FCC’s Connect America Fund distributed hundreds of millions of dollars to large telecommunications companies with the intention of upgrading service in areas without high-speed internet. But the programs were poorly designed and poorly enforced, said Christopher Mitchell, director of the Community Broadband Networks Initiative, a Minnesota-based think tank that aids communities’ telecommunications efforts. For example, the Connect America Fund only required that projects provide internet speeds of 10 megabits per second of download speed and 1 megabit per second of upload speed, a standard that has quickly become obsolete.

Burying fiberoptic lines in the ground for high-speed internet is expensive, and national companies have little financial incentive to make that investment in rural areas with few potential customers. Experts like Orton and Mitchell accuse those big telecommunications companies of using the federal funds in more populous profitable areas rather than rural ones, saying the federal grant programs were too lax.

In the current grant round in Wisconsin, Frontier, which declared bankruptcy in 2020 and is being sued by the Federal Trade Commission for deceptive business practices, is asking for more than $20 million. The company has already received nearly $185 million from the federal government to upgrade its internet service in Wisconsin.

Frontier is widely reviled by its customers for providing poor service. It finishes near the bottom of a ratings survey of telecommunications companies by Consumer Reports, and the Better Business Bureau gives the company a grade of F.

It applied for nearly $35 million from the state in a grant round last year, but received nothing.

Frontier emerged from bankruptcy “as a new company with a new leadership team committed to building critical digital infrastructure across the country,” company spokesperson Brigid Smith wrote in an email. “We’re focused on supporting a digital society, closing the digital divide, and working toward a more sustainable environment.”

AT&T has “met the obligations in these programs, including expanding service in underserved areas and (has) committed to work to close the digital divide,” company spokesperson Jim Greer wrote in an email.

Charter/Spectrum asked the state of Wisconsin for nearly $200 million in broadband expansion grants, the largest request this round. The company has received more than $160 million in federal funds for internet projects in Wisconsin. It also received about $1 million in state grants in the past two years, committing to spend about $3 million of its own funds on those projects.

“The fact is we have a very solid track record of keeping our promises on state broadband grants in Wisconsin,” company spokesperson Kim Haas wrote in an email.

“TDS has leveraged federal funding, grants, and invested millions in capital to improve internet access to nearly 50,000 rural, hard-to-serve, addresses over the last 10 years alone,” company spokesperson Missy Kellor wrote in an email. “We are expanding broadband access to more than 35,000 rural addresses in Wisconsin.”

Despite all the federal money that’s already been distributed, much work still needs to be done to bring high-speed internet to the entire state, said Gail Huycke, a community development outreach specialist at the University of Wisconsin-Madison Division of Extension who focuses on broadband expansion.

“Unfortunately, the infrastructure expectations were not very high when a lot of the past dollars were distributed,” she noted in an email. “Although companies met the requirements laid out at the time they received funding, that infrastructure may no longer be viable. I have worked with numerous communities where large sums of (federal funds) were utilized but the service is now failing, and it needs to be replaced.”

Last year, Wisconsin PSC chair Rebecca Cameron Valcq told the state legislature’s budget committee that nearly 400,000 households in the state, most of them rural, still lack access to high-speed internet access. At the time, Valcq estimated the cost of bringing it to all of them could be about $700 million.

The state of Wisconsin has tried to fill the gap by increasing the funds it puts towards broadband expansion grants the past few years. To date, the state has awarded about $178 million in broadband expansion grants, according to the PSC. About $158 million of that has come during Democratic Gov. Tony Evers’ tenure. The current state budget funds an additional $129 million in grants over the next two years.

For this most recent, $100-million round of broadband expansion grants, the state received nearly $500 million in requests, the PSC announced.

The grants are awarded based on several criteria, including whether a project is in an area unserved or underserved by internet providers, PSC spokesperson Jerel Ballard said.

In the previous round of state broadband expansion grants announced last October, the big telecommunications companies got little to nothing.

And “small carriers and co-ops are often the ones filling the community gaps where large carriers have chosen not to go,” Huycke noted.

This round of grant winners will be announced in early summer, PSC spokesman Matthew Sweeney said.

After receiving tens of millions from federal government for internet upgrades, big telecom companies ask state for millions more was originally published by The Badger Project.