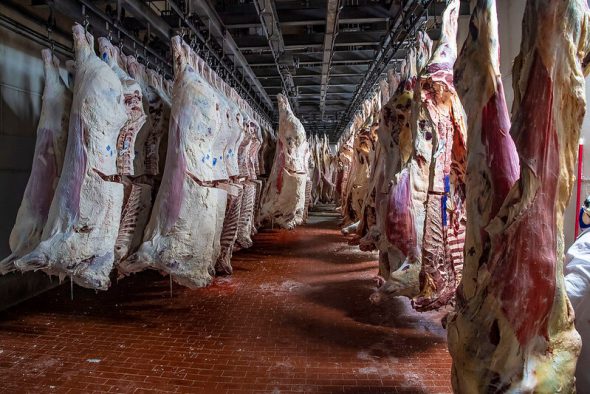 After the COVID-19 pandemic made the shortage of meat processors in Wisconsin worse than ever, the state is spending $5 million to help train a new generation of workers who can prepare beef, pork and other meats for sale to the public.

The money will be used to attract and provide financial support to meat processing students in Wisconsin and to help the processing industry connect with prospective employees.

“There is a severe shortage of skilled butchers, which is why this investment in Wisconsin’s meat processing industry is so important,” said Darin Von Ruden in a statement applauding the move from the Wisconsin Farmers Union.

The Wisconsin Farm Bureau also lauded the program for its use of incentives “to encourage students to pursue careers in meat processing.”

From the beginning in early 2020, the pandemic overwhelmed meat processors in Wisconsin and elsewhere. Employees in large, commercial processing companies were among those who suffered outbreaks of the disease, a result of working in close quarters. At the same time, concentration among larger packing companies has squeezed local, smaller processers, with the pandemic adding to the pressure on them, according to the Wisconsin Farmers Union in a 2021 report.

“This really was a problem before the pandemic,” says the Farmers Union’s government relations director, Nick Levendofsky. “The pandemic just exacerbated it.”

Processors have had trouble hiring more help. “If our local processors don’t have enough labor, they can’t keep up and don’t have the ability to process as many animals as farmers need,” says Danielle Endvick, who raises beef cattle with her husband and also is communications director for the Farmers Union.

For farmers like the Endvicks, the rise in consumer interest in locally raised meat and the opportunity to sell directly to customers offers the promise of gaining more control over the price of what they produce. But the processing shortage has clouded that vision.

Farmers who raise meat livestock have had to make reservations a year or more in advance with processors to ensure their animals are processed on time. And if they can’t slaughter and process them when they had planned, they have to continue feeding them at extra expense.

April Prusia, who raises hogs in Blanchardville, had planned to sell a dozen young pigs in April 2020 to three prospective customers who were going to raise them for slaughter.

The customers had to cancel the sale because “they couldn’t get a butcher date,” Prusia says. “All of a sudden I have 12 extra pigs.”

She had been able to get her own hogs scheduled for the butcher a year in advance, but she had to keep the other animals from the sales that fell through because she couldn’t schedule processing dates for them, either.

The funds awarded Tuesday were nearly twice the $2.6 million that Evers had included in the state’s 2021-23 budget for a “meat talent program” to help expand Wisconsin’s meat processing workforce, but that the Legislature’s Joint Finance Committee omitted from its final version of the budget.

Announcing the $5 million in training assistance on Tuesday, Evers said the money “will reduce barriers to careers in meat processing, provide new opportunities to workers across our state, and ensure our food supply chain remains resilient and successful well into Wisconsin’s future.”

The program will take time to implement. A training course for prospective butchers, such as one offered by Madison College, could take about a year, says Levendofsky. There is also the possibility of apprenticeship programs in the trade, he adds.

Prusia and two other farmers have been planning a combined worker/producer cooperative processing business. Finding skilled workers has been a particular challenge. “There is a huge bottleneck of finding somebody that actually knows how to butcher,” she says.

The group enlisted two people who are part of the Madison College artisanal meat processing program members of the co-op, expanding the coop group to five.

Prusia says the business will have a brick-and-mortar facility while also providing slaughter services on customers’ farms. She expects the operation to be ready to start in the next three months, initially for “custom” service that is marked not for sale, and will apply to provide processing for meat that is inspected and sold within the state about six months after that.

The project began before the pandemic, but kicked into high gear with weekly Zoom meetings starting a year ago. “It’s been quite a learning process,” Prusia says.