But judge warns she could reopen case if Gableman seek penalties against WEC leader.

By Laurel White, Wisconsin Public Radio - Jan 11th, 2022 11:04 am
Get a daily rundown of the top stories on Urban Milwaukee 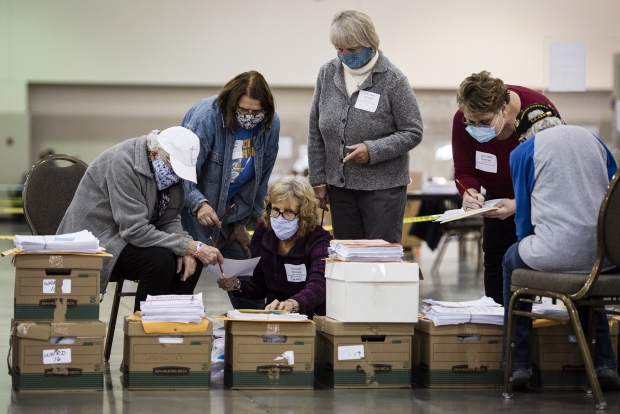 Election officials gather around boxes of documents during a recount Monday, Nov. 23, 2020, at the Wisconsin Center in Milwaukee. Angela Major/WPR

A Dane County judge is allowing a subpoena issued to the head of the Wisconsin Elections Commission in a GOP-backed investigation of the 2020 presidential election to move forward.

Former conservative Wisconsin Supreme Court Justice Michael Gableman, who is leading the GOP-backed election probe, issued the subpoena in September. Kaul brought a lawsuit against it in October, arguing the investigation was reaching outside its proper authority and that the subpoena was asking for more information than it would be possible to provide. Kaul also raised concerns about the testimony for the taxpayer-funded probe being conducted in private, rather than in a public forum.

Gableman, along with Assembly Speaker Robin Vos, R-Rochester, who initially spearheaded the investigation, have both contended private testimony is necessary to ensure the integrity of the investigation.

In Monday’s ruling, Lanford said Kaul didn’t sufficiently argue Wolfe would be harmed by not responding to the subpoena, as she has so far refused to do.

“At this stage, Plaintiffs have not shown irreparable injury, an inadequate remedy at law or preservation of the status quo — elements necessary for the Court to consider in deciding whether to grant a temporary injunction,” Lanford wrote.

However, the judge said any effort by Gableman to seek penalties against Wolfe for failing to provide testimony, as he is doing for the mayors of Green Bay and Madison in a separate Waukesha County case, could merit revisiting the argument.

“However, should (the Legislature) seek to enforce the subpoenas before this case is decided on the merits through contempt, imprisonment or other means similar to the action pending in Waukesha County … Plaintiffs can certainly file another motion for temporary injunction that the Court will schedule as soon as its calendar permits,” she wrote.

The judge also denied a motion from Gableman to dismiss Kaul’s lawsuit entirely. Gableman argued Wolfe’s job description as head of the elections commission, which is written into state law, doesn’t give her the authority to bring such lawsuits. Gableman also argued the court doesn’t have the authority to impede the Legislature’s ability to conduct the investigation.

“(It) would be nonsensical for this Court to limit authority to bring an action … because to do so would grant unfettered power to the (Legislature) to proceed with the investigation in any manner they wished despite constitutional violations,” she wrote.

Because Lanford refused to dismiss the case, there will be future court developments related to the enforcement of the subpoena.

In a prepared statement Monday, Kaul reiterated that the subpoena could still be blocked by a future court decision, and called on Gableman to withdraw his request.

“Given Speaker Vos’s recent comments indicating that the Gableman investigation will soon be coming to a close, it is my hope that former Justice Gableman will withdraw these unnecessary subpoenas rather than continuing to litigate over them,” the attorney general said.

Gableman’s investigation was initially expected to be complete by last fall. Instead, it recently expanded its scope. WisPolitics reported last week that Vos and Gableman had come to a verbal agreement about the probe ending “by February.”

Gableman did not immediately respond to a request for comment on the decision.

The Republican-backed election investigation comes after Wisconsin has completed a series of routine state election audits and a presidential recount in the state’s two largest counties, as well as an audit from the Legislature’s nonpartisan Legislative Audit Bureau. None of those reviews have uncovered widespread fraud or wrongdoing in the administration of the 2020 election in Wisconsin. There have also been numerous Republican-backed lawsuits in the state, all of which have failed to result in findings of wrongdoing by election officials or voters.