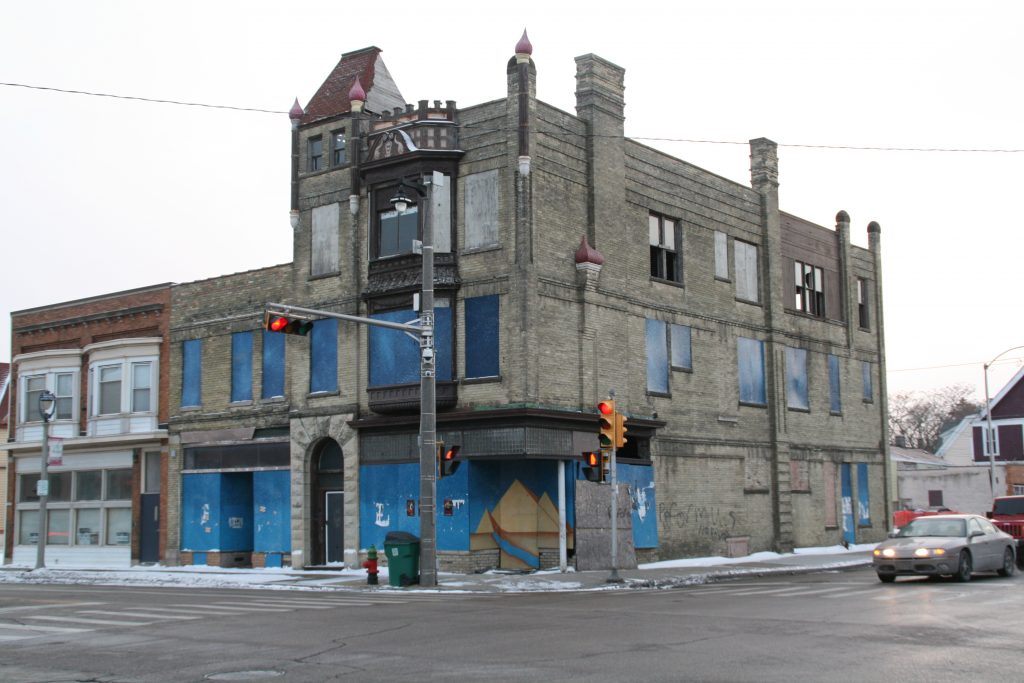 The Department of City Development has quite the deal it will soon offer.

It will effectively give a developer a free historic property and at least $35,000 to upgrade the intersection of N. Martin Luther King Jr. Dr. and W. Center St.

But there is a catch. The interior of the three-story building at 2673-2679 N. Martin Luther King Jr. Dr. is in such rough shape that you can’t tour the entire space.

“The interior is very, very dangerous,” said department real estate specialist Matt Haessly to members of the Bronzeville Advisory Committee on Monday morning. “It will need a complete renovation.”

“We like to call that a blank canvas opportunity for your creative uses,” she said. “Hopefully community members will see it as that.”

The 11,160-square-foot building, constructed in 1889, is made of Cream City brick and was designed by prominent Milwaukee architect Charles Kirchhoff, Jr.

“It’s so architecturally interesting that we are hoping people are going to be excited about this listing and take it on,” said Turim.

Get a daily rundown of the top stories on Urban Milwaukee
DCD will offer the property for sale for $15,000 via a request for proposals in the coming weeks. But the listing will explicitly include a $50,000 historic infrastructure preservation fund investment, a city program used to expedite rehabilitation projects by appropriately securing facades. The listing, a draft of which was presented, also includes the suggestion of applying for city facade, retail investment fund grant and white box program grants, Focus on Energy grants and King Drive Business Improvement District (BID) support.

The upcoming listing suggests the building could be used for a restaurant, retail space, office, housing or a combination of the above.

“The uses are kind of wide open here, to be honest,” said Turim. The standard restrictions do apply. The city will not accept proposals for a parking lot, pawnshop, cigarette or cigar shop, gun shop, liquor store, payday or auto-title loan store, medical service facility or other uses prohibited by zoning.

Someone looking to redevelop the building could find support for their project through historic preservation tax credits. But they would first need to apply to the state and federal government to have the building historically designated.

As it stands, the building is only locally historically protected. Any changes to the exterior will require approval from the city’s Historic Preservation Commission.

“The most important part is that they obtain approval from the Historic Preservation Commission for their repairs and repair the building in a timely manner,” said Turim.

The city, which will require a performance bond from the future buyer, will allow two years of construction work after the building is purchased. That’s a longer term than many past RFP listings. The extension drew praise from Emem Group vice president Deshea Agee, who previously led the area’s business improvement district.

The King Drive BID previously studied how the building could be redeveloped. A report, prepared by UW-Milwaukee’s Community Design Solutions, includes two conceptual plans for repurposing the structure.

Option one contemplates a first-floor restaurant with office space and a single two-bedroom apartment above.

The second option includes a first-floor office space and podcast/recording studio. The upper floors would be used for five apartments. Each proposal involves a rear parking lot along W. Center St. Financing options are not discussed.

Plenty of other uses have filled its walls. It’s been home to a pharmacy, photo studio, medical offices, tire repair shop, dentist, dressmaker, clothing store, needlework shop, income tax service, candy store and shoe store. Almost all of it was leased as an apartment at one time or another.

In the 1970s the first floor was home to Ham & Egger restaurant and in the 1980s to Fireside Barbecue restaurant.

It was built in 1889 for Henry Hummel during a period when Kirchhoff was designing multiple similarily-sized taverns simultaneously for the Joseph Schlitz Brewing Company. The Uihlein family, which owned Schlitz, might have had an ownership interest in Hummel’s property, HPC staffer Carlen Hatala speculated in her 2010 historic designation report.

No hard proof of original Uihlein ownership was ever found, but three things are true. One, William J. Uihlein, assistant superintendent of Schlitz, purchased the building in 1906. Two, Uihlein had already applied to build the structure’s two-story southern addition before his purchase. Three, despite the Uihlein-Schlitz-Kirchhoff connection, the building has never held a tavern on its first floor. Members of the Uihlein family owned the building from 1906 to 1972.

At the time the building was constructed, Kirchhoff was also designing the similarly-sized tied-house taverns at 322 W. State St. (most recently Point Burger Bar Express), 1900 W. St. Paul Ave. (Sobelman’s) and 2249 N. Humboldt Ave. (Humboldt Gardens, city-owned and proposed for redevelopment). Each of the buildings has a unique cornice style, with the Hummel building sporting flame-like caps.

The local historic designation was sought by Christopher Freund, who was one of many Freund family members to own the property after the Uihlein family. Christopher gutted the building and, as of 2009, intended to create space for a nonprofit organization on the first floor and an apartment for himself on the upper floors. But Freund’s redevelopment never proceeded.

The City of Milwaukee acquired the building in property tax foreclosure in 2010. A one-story, 1927 addition along W. Center St. was demolished in 2013.

A listing for the property is expected to be posted on DCD’s website in the coming weeks. 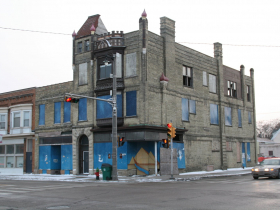 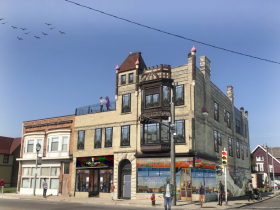 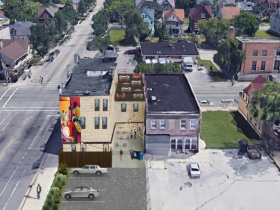 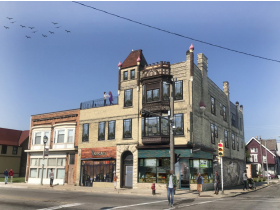 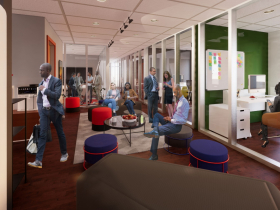 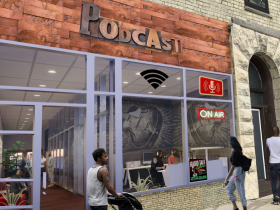