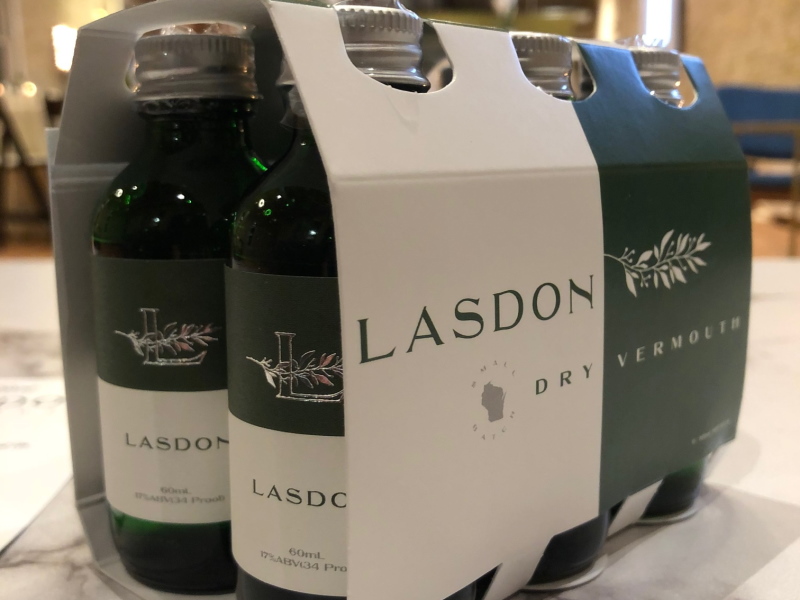 If you have a dusty bottle of vermouth in your liquor cabinet or hiding away in the back of your fridge, you might want to consider buying a fresh bottle of the stuff, says Eric Berg, co-founder of Lasdon Vermouth, a Milwaukee company that sells six packs with mini-bottles of locally made vermouth.

Vermouth is a fortified wine, like sherry or port. These products are typically fortified with brandy, which gives them a longer shelf life than wines. How long? Experts suggest that when using vermouth to make a drink like a Martini it can last a month or two if refrigerated, but not as long if kept on the shelf at room temperature. (The shelf life is likely longer if you’re only using it in cooking.)

So Berg started Lasdon Vermouth, which produces dry vermouth with ingredients sourced from around Wisconsin and sells them in six packs of two-ounce bottles. They’re currently retailing in the Milwaukee area at Discount Liquor, Rays Wine and Spirits and Village Cheese Shop.

Berg is a corporate attorney by day, and he has some entrepreneurial experience with owning an art gallery and starting a private equity firm. He said he “felt up to the task of going down the rabbit hole” and seeing if his idea was feasible.

The first and most important thing for producing vermouth is the wine. If you want quality vermouth, you need quality wine, Berg said. Most of the world’s vermouth is produced in Italy and France.

Berg said he wanted the product to be produced with Wisconsin ingredients. As it turns out, Wisconsin has a very good wine industry, and it’s growing, he said. He and his business partner, Ben Proctor, traveled the state and eventually landed on a particular kind of grape called the LaCrosse varietal.

Get a daily rundown of the top stories on Urban Milwaukee
The LaCrosse varietal produces a “relatively neutral, dryer” white wine that Lasdon uses as a base. The wine is blended with a brandy distillate and a proprietary blend of herbs and botanicals.

The end product is a vermouth that “is more complex than other vermouths on the shelf,” Berg said, though not to the point of overpowering the other flavors in your favorite cocktail.

After two years of research and work to get the company off the ground, Lasdon officially launched in November.

So far, Berg has enjoyed his venture into the booze business. He’s been encouraged by “Support and collaboration from other people in Wisconsin in the industry,” he said. “I think that we have a great community here in this state.”