How We’ve Recovered From Economic Woes

Recent history shows similar patterns -- and keys to recovery -- for Wisconsin and U.S. 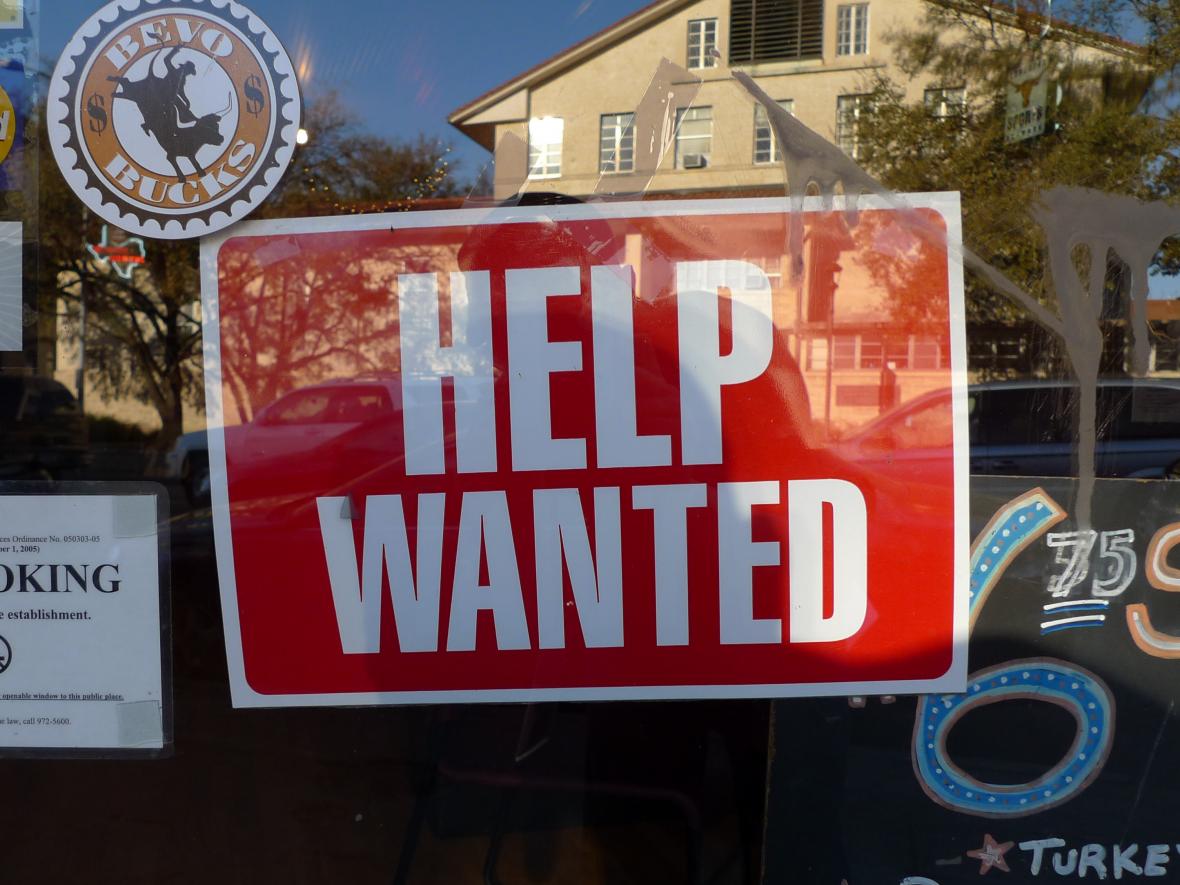 A history of the American economy over the past 50 years presents some answers – and mysteries – as to how we’ve recovered from recessions.

The graph below shows the civilian unemployment rate since 1976 both nationally (in black) and in Wisconsin (in green). It also shows the recessions that hit the United States during that period: Typically, unemployment peaks at the end—or after the end–of the recession. The graph includes:

For much of this period, but not all, Wisconsin’s unemployment rate was lower than the national average, a pattern that seems to have returned most recently.

Also, the length of recessions has varied widely, from a low of two months most recently versus 18 in the Great Recession. 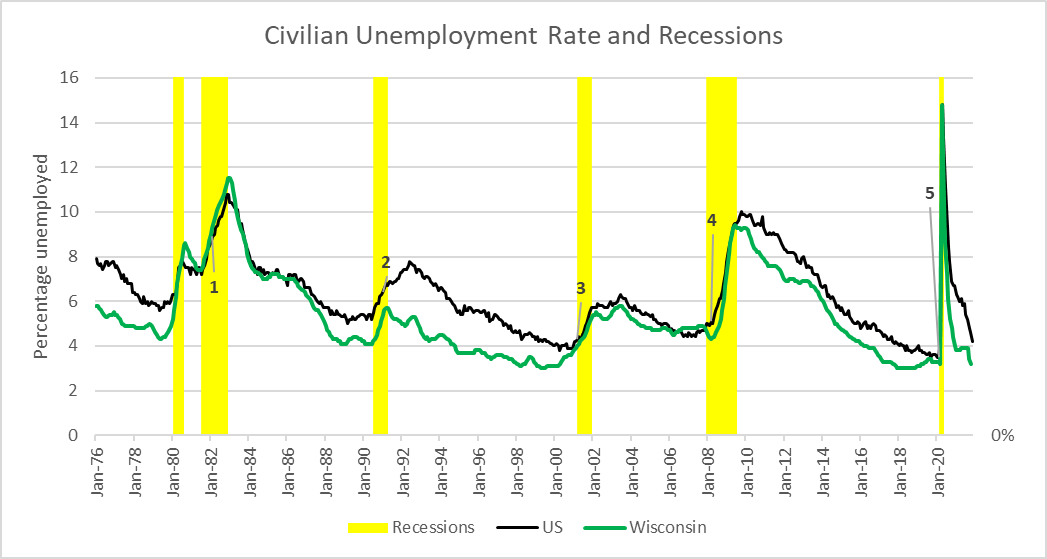 Note that the job gain following the Great Recession was substantially lower than during the two previous major recoveries. The evidence points to the hypothesis that the Obama administration underestimated the size of the need. Thus, while the stimulus offered by the American Recovery and Reinvestment Act (ARRA), was able to end the economic decline, it was too small to stimulate rapid growth.

By the time the administration realized that more was needed, it was too late to launch a second plan. Democrats had lost control of Congress and the Tea Party movement strongly opposed government programs. 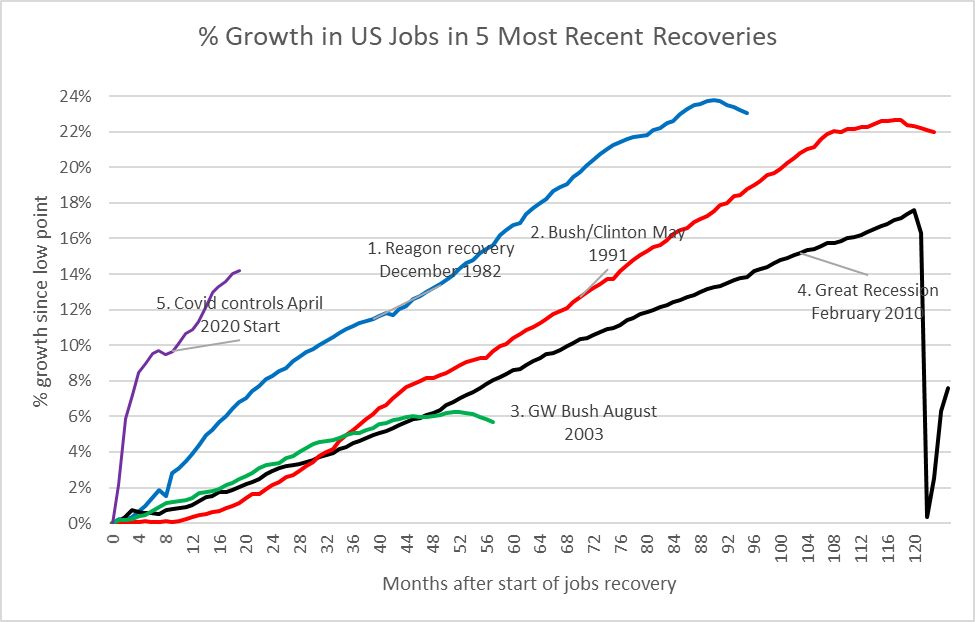 % Growth in US Jobs in 5 Most Recent Recoveries

One notable aspect of this graph is how much the pre-Covid Trump economy looks like a continuation of the Obama recovery. Note the black line above showing a steady, month-by-month increase in jobs since the post-2008 Great Recession, continuing through two notable events: Donald Trump’s inauguration (month 84) and passage of Trump’s Tax Cuts Act (month 96). Neither is associated with a change in the rate of adding jobs. (The gross domestic product tells a similar tale.)

There are striking differences between the two recoveries. First, the job growth rate in the present recovery has been much steeper than during the recovery from the Great Recession.

Second, the current recovery (the purple line in above graph) is anything but a straight line. Unlink the previous recovery, which seemed immune to political changes, such as the Tax Cuts Act and the change in administrations, there is a notable kink in the current recovery. This kink corresponds in time to the November 2020 presidential election and then President Trump’s attempt to reverse the outcome. Whether there is a causal relation or mere coincidence is uncertain.

As already mentioned, the pandemic recession was very much shorter than the Great Recession.

The next graph shows the number of jobs since the start of the Great Recession for the United States (black line) and for Wisconsin (green line). To a large extent, Wisconsin’s economy is a mirror image of the nation’s. 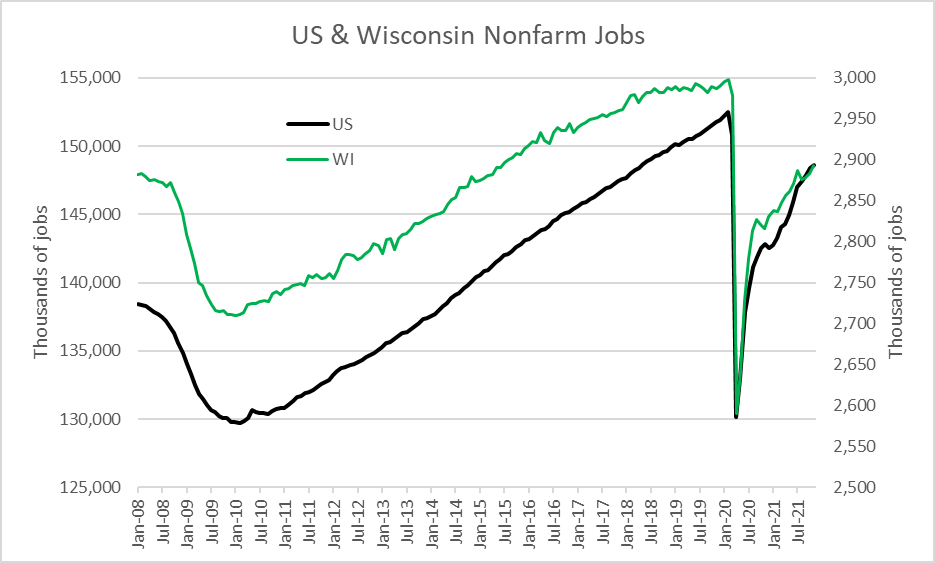 The next chart shows the change in US nonfarm jobs by month since January 2020, shortly before the pandemic hit. Other than during the two-month recession, only one month showed a decrease in jobs. This occurred in December 2020, as Trump fought to reverse the election.

Change in US jobs (thousands)

The later part of the series, beginning in April 2020, after the pandemic hits, is more unusual. The number of employed people increases and the number looking decreases, but the workforce itself barely budges, at a size well below that before the recession. Why has the workforce shrunk?

A number of explanations have been advanced for this mystery. Clearly the cause is not a shortage of jobs. Recruiting signs are everywhere.

One possibility is that a significant number of people don’t want to return to their miserable jobs. A related explanation is that members of the Baby Boom decided to accelerate their retirement. 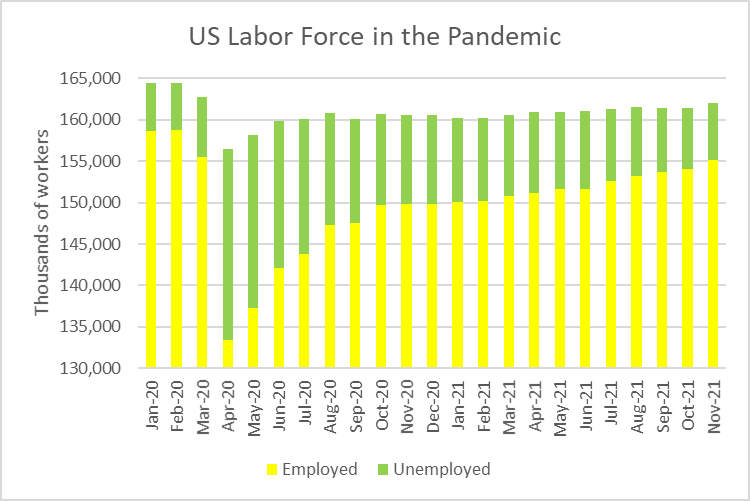 US Labor Force in the Pandemic

The next graph shows similar data for Wisconsin. For once, the state diverges from the nation, with a current labor force a bit bigger than that before the pandemic. Again, the reasons are unclear.

(There are also two other apparent anomalies in the Wisconsin data. The first is the September 2020 peak, a peak not echoed in the national data. I think this most likely reflects sampling variation. Alternatively, perhaps this reflects an actual phenomenon, such as Census hiring when the Census was far behind its schedule. The November 2021 apparent disappearance of unemployment data is due to the Bureau of Labor Statistics not yet releasing that data at the time this column was written.) 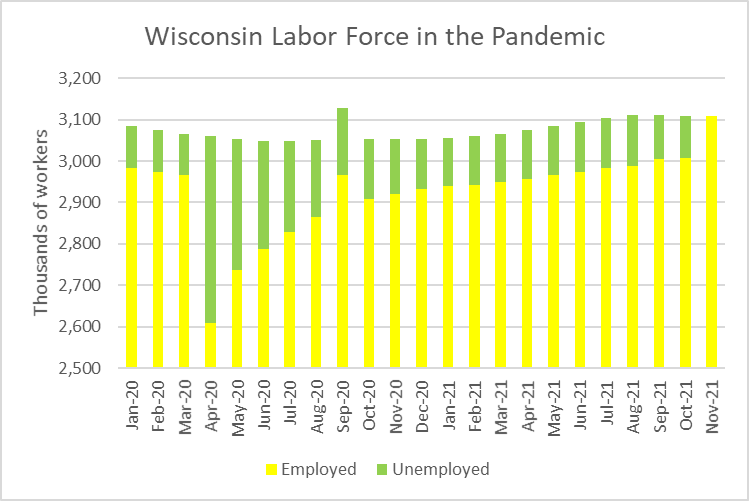 Wisconsin Labor Force in the Pandemic

From the viewpoint of the economy, the nation fared much better under the pandemic recession than in previous recessions. A large part of the explanation, I believe, is that there was a bipartisan consensus during the first year of the pandemic that very large programs were needed to head off job loss and poverty resulting from measures to control the virus.

This consensus led to the passage in March 2020 of the Coronavirus Aid, Relief, and Economic Security Act (CARES Act). This was the largest economic stimulus package in U.S. history,

In December of last year, Congress followed with the Consolidated Appropriations Act of 2021. passed with large bipartisan majorities in support by both houses. of Congress. Despite initially criticizing the bill, President Trump signed it into law on December 27.

Needless to say, the Republican embrace of spending to combat the pandemic and a possible recession did not survive the election of Joe Biden. The American Rescue Plan Act of 2021 proposed by President Biden, passed in March 2021 on a largely party-line vote.

From an economic viewpoint, the US—and Wisconsin—survived the Covid-generated recession remarkedly well. Much better, in fact, than the nation and this state have done against Covid itself. The inability of the Democrats to coalesce around a Build Back Better model, and the Republican refusal to participate in developing solutions to the nation’s challenges, suggest that the future may be considerably darker.