‘Get Back’ Is a Revelation

Peter Jackson's 8-hour documentary on the Beatles is a slow but powerful demonstration of what real artistry is about. 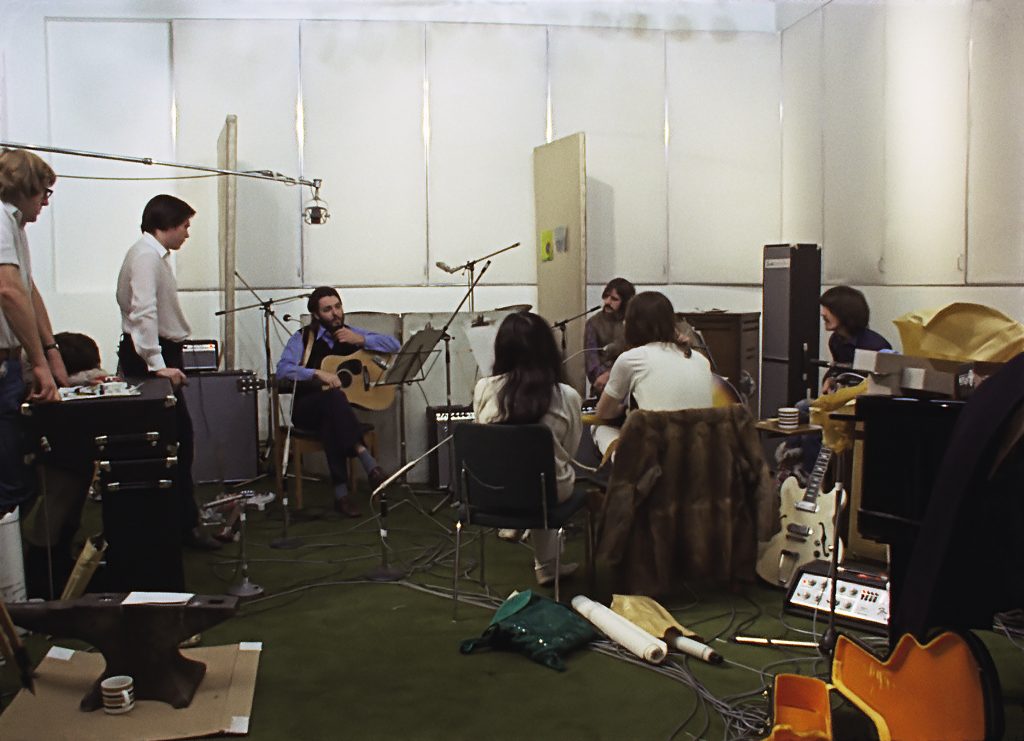 Paul McCartney, Ringo Starr, George Harrison, and John Lennon in THE BEATLES: GET BACK. Photo courtesy of Apple Corps Ltd.

There is a lot to ponder in Get Back, the great, maximalist documentary about the making of The Beatles’ album Let It Be. Director Peter Jackson pared it down from 14 hours to a still-lengthy eight, and seriously, it could not have been a minute shorter. It may feel like drudgery at times, but so does making an album. Despite Lennon’s near manic state — the man had no off button — there was work to be done and the taskmaster was clearly Paul McCartney. No wonder the others resented him; what was he thinking, trying to get the world’s greatest pop band to make some music.

The film is full of revelations both big and small. In a room that included John Lennon and Peter Sellers, who would you expect to be looning about and cracking everyone one up? If you said Sellers, you’re wrong. Also fascinating: Two of the most demonized women in rock history are seen in a softer light — both Linda Eastman, soon to be McCartney, and Yoko Ono, are young, sweet-faced and seen chatting with each other. Wouldn’t you love to have had a hidden mic for that? Both come off as likable, love-smitten (just like their future husbands) and enjoying the mayhem. John couldn’t have been more attached to Yoko if you had sewed them together, and I got the impression it was his idea as much as hers.

But it’s what they were trying to do that really interests me. The Beatles, prime movers in ‘60s culture, couldn’t help creating new paradigms on a daily basis, it was just what they did. One of the biggest shifts was brought on by their radical approach to multi-track recording. They had quit the road three years before and became studio rats. Literally living at Abbey Road, they were doing endless takes and adding backward tape loops, orchestras, and weird effects with the ease endless tracks provide. Don’t get me wrong, they did it wonderfully, taking it to its logical, psychedelic, conclusion in the Summer Of Love with Sergeant Pepper in 1967 when the whole world seemed to have dropped acid.

This was the beginning of the producer-as-auteur age, the one that is to this day is firmly planted in the middle of the music business. To question it is to risk being looked at askance and labeled a purist. This technique worked for The Beatles because they were great writers and great performers. Unfortunately it worked almost as well for lesser artists, hiding more modest talents behind layers of sonic frou-frou and devolving into excesses like Queen recording a hundred tracks of foot stomping for “We Will Rock You” and the notorious Milli Vanilli, who didn’t even sing on their biggest hit.

Where are we now? Well, almost all pop music is made “in the box,” usually an iMac, or maybe an iPhone or iPad (Apple has lost its fab associations). Drums are largely electronic, vocals are routinely auto tuned and mixes are drenched in reverb before being squished into sausage-shaped volume packets with compressors to make them fly out of your smart speakers at maximum volume.

Were the Beatles sniffing this out and trying to do something about it? It sure looks like it. Everything they did during the recording of Let It Be was designed to drive recording engineers bananas. There was no isolation. Everybody was in the same room sitting a couple feet from their unbaffled amplifier. They sang through a p.a. that was often feeding back. Drums, which usually get room of their own, were loud and obnoxious and bleeding into the vocal mics. The Beatles didn’t care, as was made clear in the run-up to the roof concert. They could have asked to record on the moon and their team would have tried to find a way.

The long hours they spent in each other’s presence are what used to be called “rehearsal.” It involved, for them, a lot of loosening up by playing their favorites from their club days and lighting cigarettes every twenty seconds or so. Occasionally they would work on their songs, taking them from rough sketches to highly polished, ready-to-record gems. Billy Preston, the keyboard maven they met back in the Hamburg days, shows up out of the blue to throw gasoline on their creative fire.

By the time they got on the roof they were as tight as Ringo’s Ludwig snare drum. Bundled up against London’s January weather (you see John rubbing his hands together a lot), they let it fly. There are three (I think) cuts on the record that were actually performed under these impossible conditions.

For you insomniacs out there, there are many magazines aimed at professional and amateur studio engineers. They feature lots of tricked out, ridiculously expensive rooms where the modern sonic style sheet is adhered to. They rattle on about mic placement and other scintillating topics designed to induce Thanksgiving-level sleepiness. What they should be doing is talking about how useless all this stuff is without artistry. The Beatles could have made a great record in the middle of Abbey Road with cars buzzing by. They were seasoned veterans and didn’t need to be pampered (although they did like their tea!).

What I am trying to say is modern production often drains a song — if there is even one to start with — of the life artists and live wires like The Beatles and Billy Preston exuded. The original documentary had the very fitting title, “Let It Be.” “Get Back” isn’t bad advice either. They should both be inscribed on studio walls everywhere.

One thought on “Sieger on Songs: ‘Get Back’ Is a Revelation”