By Hope Kirwan, Wisconsin Public Radio - Dec 17th, 2021 12:51 pm
Get a daily rundown of the top stories on Urban Milwaukee 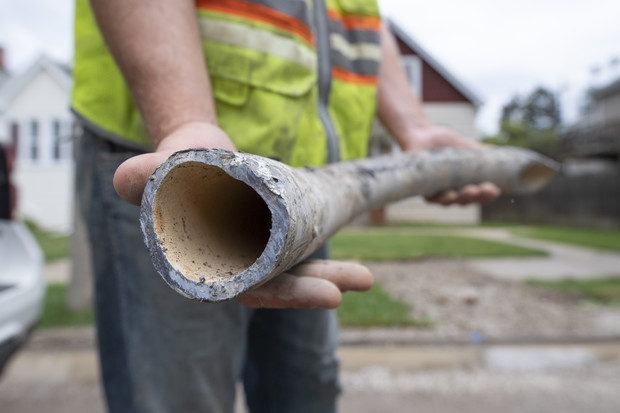 Tom Iglinski, an engineering technician with the city of Milwaukee, holds up a replaced lead service line on June 29, 2021. Since 2017, Milwaukee Water Works says it has swapped out 3,881 lead pipelines. Replacing the city’s remaining 70,000 lead service lines at that pace would take more than 70 years and cost hundreds of millions of dollars. Isaac Wasserman/Wisconsin Watch

Vilsack visited a water treatment plant in the City of Bloomer, which will receive $27.6 million in loans and grants from the U.S. Department of Agriculture’s Department of Rural Development.

The funding will allow the community to replace 4.6 miles of lead water main pipe and other aging sewer infrastructure.

Vilsack’s visit was part of the Biden administration’s announcement Thursday of a new Lead Pipe and Paint Action Plan. The plan outlines how funding from the $1 trillion federal infrastructure bill passed in November and from previous COVID-19 stimulus bills will help communities across the country work on lead abatement and replacing lead pipes in drinking water systems.

“When we invest in rural infrastructure, we invest in the livelihoods and health of people in rural America,” Vilsack said in a press release. “The investments we are announcing today will drive the creation of good-paying union jobs and grow the economy sustainably and equitably so that everyone gets ahead for decades to come.”

Bill Miller, Bloomer’s water and wastewater manager, said the city was able to remove all of its lead service lines throughout 2019 and 2020 thanks to money from the Wisconsin Department of Natural Resources’ Safe Drinking Water Loan Program. But he said testing showed the community’s water was still exceeding state drinking water standards.

“When the council wanted to look into doing this whole package, I didn’t think we could do it. So it was very important that we found this (USDA funding),” Miller said.

Miller said Bloomer will receive $13 million as a grant and borrow $15 million through the USDA’s 40-year loan program. He said the two-year project will end up replacing about 17 percent of the city’s water system.

Chris Groh, executive director of the Wisconsin Rural Water Association, said it’s fairly rare to see high lead levels in rural municipal water. He said almost every community has some known lead components in their system, but most aren’t proactively working to remove them. Instead, he said rural utilities replace lead components that come up when other system repairs are needed.

“That’s a slow operation and it’s going to take a lifetime to really get at all of the lead systems in a city,” Groh said. “It’s one of those things that just kind of hangs over you … This is a chance to actually get rid of the lead out of a system.”

Groh said rural water systems in Wisconsin serve about 4 million people. By giving communities an opportunity to pay for needed infrastructure upgrades through USDA grants or low-interest loans, he said the investment will help make water safer and less expensive for residents.

Both rural and urban communities have systems that still rely on lead pipes. The City of Milwaukee Water Works’s website says approximately 67,000 of the city’s 164,000 water service lines are currently made of lead.

Democratic U.S. Rep. Gwen Moore, issued a statement Thursday celebrating the funding announcement from the Biden administration and what it means to the Milwaukee area residents she represents.

“For years, I have fought for the federal government to do more to help our state and city address this public health threat, which harms our most vulnerable, disproportionally impacting communities of color,” Moore said in the statement. “No municipality by itself can solve this problem. The comprehensive plan that the Biden Administration laid out today provides the strong response and leadership that is needed to help protect our children.”

Exposure to lead is most harmful to children, especially under the age of 6. The Centers for Disease Control and Prevention warns lead exposure can cause damage to a child’s brain and nervous system, slow growth and development and cause problems with learning, behavior, hearing and speech.

Scott Laeser is water program director for environmental advocacy group Clean Wisconsin. He said there’s a lack of awareness about how common lead components are in rural water systems, with many assuming the issue mainly affects urban areas.

He said there is no data available on how many homes that use private wells have lead pipes, meaning thousands of people in rural areas could have lead components without knowing it.

Laeser said he’s hopeful the federal focus on lead lines could spur more action on the issue at the state level. He said Gov. Tony Evers has included funding for lead service line replacement in both of his budget proposals.

“Unfortunately, the legislature has taken that out of both budgets. So I would hope that this federal money is an interim way for us to keep replacing lead service lines while we work on getting needed state investments,” Laeser said.