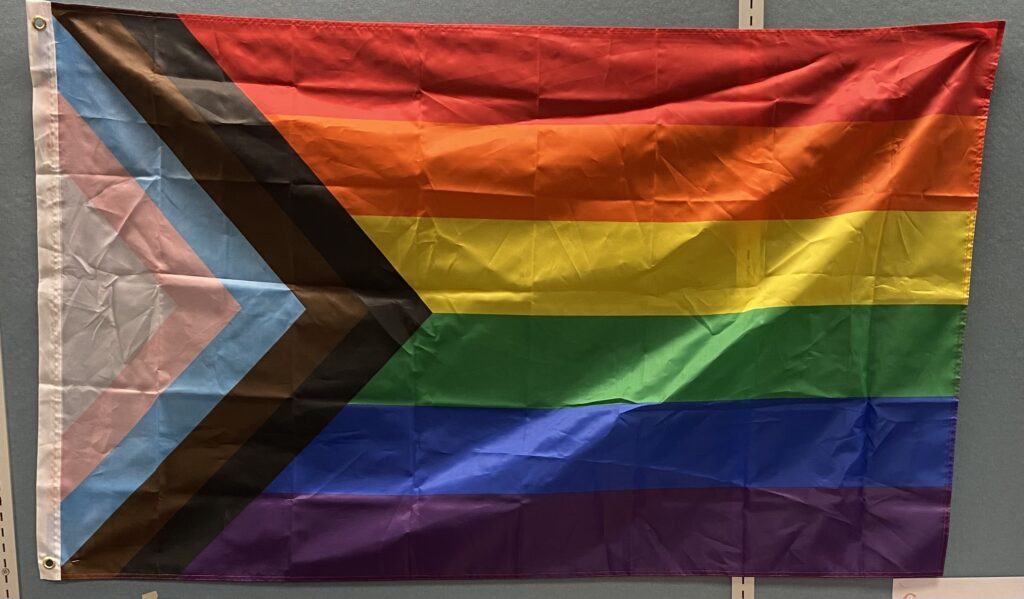 Sarah Whaley’s Rainbow Pride Flag, pinned up in her classroom before she was suspended for violating the Waukesha School District’s ban on signs and symbols that make political statements. Photo courtesy of Sarah Whaley/Wisconsin Examiner.

Special education kindergarten teacher Sarah Whaley was given a one-day suspension on Dec. 8 for flying a rainbow Pride flag in her classroom in support of LGBTQ+ students. The Alliance for Education in Waukesha and the local teachers’ union are calling for all students and school staff members to wear rainbow clothing on Friday, Dec. 17 to support her. 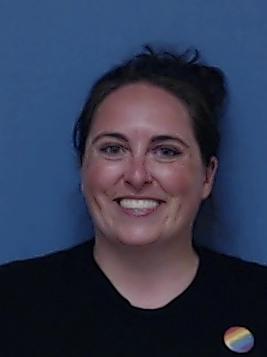 In August, the district administration required the removal of all “political” signage including Black Lives Matter, Thin Blue Line posters and rainbow signs and flags supporting LGBTQ individuals. For four months, students, teachers and parents have testified at school board meetings calling for a reversal of the administration’s ban on signs. The administration also suspended the District Equity Leadership Team and diversity training for staff members.

The Wisconsin Examiner has run a series of articles on the initial controversy, rallies and charges of school bullying exacerbated by the school district policy.

Speakers at board meetings have contended that the new policy backfired by creating more division in the schools and increasing bullying of ethnically, culturally and gender diverse students. Board members and the administration say they are listening, but have made no movement to clarify or change the policy.

The board’s policy committee meeting on Dec. 14 highlighted the divisions in the community. While only two citizens spoke before the committee, they were at polar ends of the Sarah Whaley suspension and the upcoming protest on Friday.

Local parent Stacy Keene, who an opponent of remote instruction during the pandemic who moved her children to private school and wrote a letter urging Gov. Tony Evers to refund taxpayers’ money in school district where classrooms went online, spoke against the teachers’ union and the Alliance rallying for Whaley. Whaley had been told numerous times to take down her Pride flag, but she refused, Keene pointed out. Keene considered this a clear case of insubordination, saying teachers should not use students as pawns to push their social agenda. “You are paid to educate my child, not protest in the classroom.”

A high school student who was identified only as Sammy spoke next, supporting Whaley and stating that she should receive back pay from her suspension, that the suspension should be wiped from her record, and the district should issue a written apology, since staff members should be able to fly rainbow flags without negative consequences.

At the committee, school board member Anthony Zenobia asked the administration how they distinguish hate speech from bullying and harassment.

Monica Whaley is Sarah’s aunt and teaches in the Waukesha schools. The question Zenobia asked is a classic example of how the district is trying to minimize discrimination in the district, she says. They don’t want to acknowledge that hate speech is going on, so they try to reclassify it whenever they can as something else.

Monica says that the enforcement of the rule against  political signs has been inconsistent throughout the district. Some principals have been strict; others have looked the other way. Sarah appears to be the only teacher so far to receive a suspension.

Monica spoke at length at the Dec. 9 board meeting defending her niece and describing the dedication she brings to teaching, how she gets down on her hands and knees to work with the kindergarten special needs children under her care.

Sarah is in her first year at Waukesha Summit View Elementary. Previously she taught at Milwaukee College Prep, an authorized charter school of Milwaukee Public Schools with a predominately Black student population.

Monica says that she convinced Sarah to come to work in Waukesha, and told her that the district was a caring community. Sarah brought her expertise and passion for  education and dedicated herself to working with students of all colors, ethnic backgrounds and special needs in Waukesha. Now Monica questions her recommendation that Sarah come to Waukesha.

But Sarah Whaley says she is not going anywhere. “I was very excited to come to Waukesha when I discovered they were having an equity initiative.” That is gone now, but she hopes it is soon restored. “I absolutely love my job. I don’t regret coming to Summit View [the elementary school where she teaches] one second.”

In addition to her teaching experience, she co-founded Camp Kindred – Unity in Motion in 2018. On its website, the organization states its mission: “We develop new generations of diverse, culturally competent, empowered leaders equipped with the skills, values, and relationships necessary to disrupt the cycle of segregation by building diverse, equitable, and loving communities.”  The organization offers summer experiences for students and families and Project LEAD to develop leadership “that works to disrupt segregation by intentionally connecting diverse young leaders and empowering them to advance justice.” There, Whaley states, “As a teacher I want children to feel safe and loved. I want students to feel that they are welcome and belong in school.”

When Whaley returned from her suspension, she discovered that her Pride flag was gone. She replaced it with a rainbow colored sign which reads, “The district liked my flag so much they decided to borrow it. But the truth remains. You Belong! You are loved. You are supported. You are welcome. You are important. You are beautiful. You matter.”

The only thing different about her original flag is that it is called a Progress Pride flag and has additional colors to represent Black and Brown LGBTQ people and other colors for Transgender individuals. So far, the administration has elected not to remove that new, more traditional rainbow sign.

Whaley has no idea why she was singled out. A teacher at another school even sent her a photo of a pride flag flying in another Waukesha classroom. “My principal and I have had very positive interactions throughout this entire experience,” she says. But her disciplinary meetings have also included Deputy Superintendent Joe Koch and human resources. “They have threatened me with termination. … If I were to continue being insubordinate by keeping the flag up, they would use progressive discipline up to and including termination.”

Whaley is being represented by the local teachers’ union of the Wisconsin Education Association Council (WEAC) in contesting the suspension. She would neither confirm nor deny that she has also contacted a separate attorney and is considering additional legal action.

Waukesha school superintendent James Sebert did not return a phone call asking for comment for this story. Monica Whaley’s speculation is that the superintendent took it upon himself to try to defuse the situation through the ban on signs.  Says Monica, the ban was originally only supposed to cover racial and other political issues. But somehow the rainbow signs got thrown in, and the administration would not admit they made a mistake. It would be only speculation that Sarah’s original flag somehow crossed a line.

The school board has moved to the hard right, Monica believes. Before school started this fall, Waukesha was the only school district in the state to turn down a federally funded universal lunch program. It reversed its decision shortly thereafter.

The handful of moderate conservatives left on the board are targets in the next election. Citizens who have spoken at board meetings have sometimes called out board members by name that they want to be replaced.

Monica says there appear to be more rainbow signs and flags displayed in schools than the administration cares to admit. Teachers are crushed in how they are being treated by the board and the administration, says Monica, who predicts there will be a rush of teachers retiring or moving to other districts.

The degree to which staff and students wear rainbow colored clothing on Friday, Dec. 17, and whether there are any confrontations in and around the schools will be an indicator of  the effects of the signage ban and protests.

Waukesha teacher suspended for rainbow flag was originally published by the Wisconsin Examiner.

One thought on “Waukesha Teacher Suspended for Rainbow Flag in Classroom”