By Laurel White, Wisconsin Public Radio - Nov 16th, 2021 11:36 am
Get a daily rundown of the top stories on Urban Milwaukee 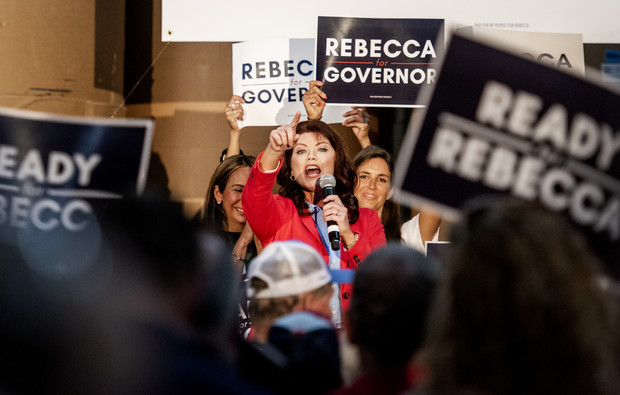 GOP candidate for governor Rebecca Kleefisch filed a lawsuit Monday against the Wisconsin Elections Commission, calling on the state Supreme Court to suspend guidance the commission issued to local election officials ahead of the 2020 election.

The lawsuit asks the state’s highest court to take the case immediately, bypassing lower courts that would typically handle such matters first. It argues guidance related to absentee ballot drop boxes, polling place locations and voting in nursing homes violated state laws on the subjects and should be changed ahead of the state’s 2022 election.

The issues were recently surfaced in a nonpartisan audit of election administration in the state. The audit found no widespread fraud or wrongdoing that would have altered election results, but made more than two dozen recommendations for updates to elections commission policies and state laws governing elections.

In a prepared statement, Kleefisch said her lawsuit forces the Wisconsin Elections Commission to “clean up their act prior to administering the 2022 election.”

“Our freedom, our way of life, and the future of our great nation all depend on free and fair elections — elections where every voter can trust the process and the result,” she said. “Wisconsinites are sick and tired of unelected bureaucrats intentionally ignoring the law.”

Related to absentee ballot drop boxes, Kleefisch’s lawsuit argues the elections commission illegally allowed their use in 2020, because there is no provision in state law that allows ballots to be returned other than by an in-person drop off to a clerk’s office or by mail.

The drop boxes were used widely in Wisconsin and across the country in 2020 because of the COVID-19 pandemic.

On its website, the elections commission argues no Wisconsin court has barred the use of drop boxes and that the commission “continues to view the use of secure absentee ballot drop boxes as a decision to be made by local elections officials in coordination with their counsel.”

At the time, the elections commission said it believed special voting deputies wouldn’t be allowed in nursing homes and care facilities because of Gov. Tony Evers’ March 2020 pandemic-related executive order and subsequent guidance from the state Department of Health Services about “non-essential” travel and services.

Last month, the Racine County sheriff raised concerns about how voting was conducted in a nursing home in his community, arguing some residents were improperly influenced by staff. Republicans have pushed for follow up on those allegations, but no criminal charges have yet been filed.

At the time it issued the guidance, also in March 2020, the commission said giving clerks more flexibility to move polling places was necessary because the current pandemic-related state public health order closed some facilities that serve as polling places to public access, like nursing homes. That order came less than 30 days before the April presidential primary.

The Wisconsin Elections Commission declined to offer any additional comment Monday on the lawsuit’s allegations.