State Could Get $800 Million For Water Systems

By Danielle Kaeding, Wisconsin Public Radio - Nov 9th, 2021 10:42 am
Get a daily rundown of the top stories on Urban Milwaukee 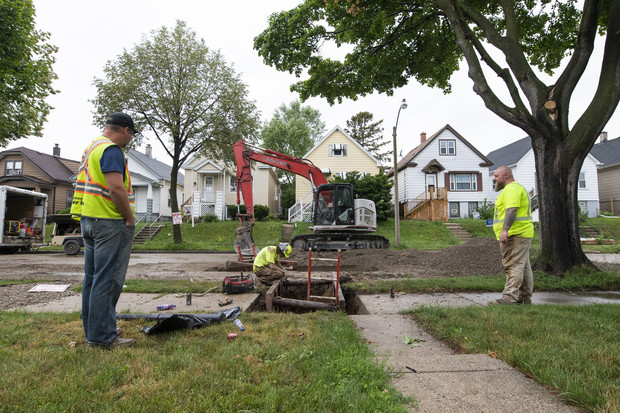 From left: Tom Iglinski, Jericho Gomez and Ryan DeBelak are part of a four-person crew working to replace a lead water service pipeline in Milwaukee on June 29, 2021. Wisconsin communities have replaced more than 115,000 utility-owned and privately-owned service line portions since 2016, according to a Wisconsin Watch analysis. Still lurking in 2020, however: an estimated 465,000 pipeline portions made of lead or other potentially hazardous materials. Isaac Wasserman/Wisconsin Watch

Wisconsin’s aging water and wastewater systems may be able to speed up improvements with more than $800 million the state is set to receive through the $1 trillion infrastructure bill recently passed by the U.S. House. The infusion of federal dollars marks a historic investment, but it represents a fraction of the overall need statewide.

The bill devotes $55 billion to upgrading water and wastewater infrastructure nationwide, and the legislation sets aside $15 billion to replace lead pipes. Wisconsin is expected to see $841 million over the next five years to improve water infrastructure based on an existing funding formula for the state’s revolving loan funds.

“Now, because of President Biden’s efforts to pass this once-in-a-generation infrastructure plan, we’ll be able to build on the progress we’ve made these past two years and continue our work fixing our state’s crumbling roads, investing in lead pipe replacement, and expanding access to broadband across our state,” said Gov. Tony Evers in a statement.

Around $8.6 billion is needed to improve Wisconsin’s more than 11,000 public water supplies over the next two decades, according to the American Society of Civil Engineers. Wastewater systems report nearly $6.3 billion worth of investment that’s needed to address aging infrastructure.

Chris Groh, executive director of the Wisconsin Rural Water Association, said the funding may help ease the pain for customers who are currently paying for upgrades through increases in water and sewer rates. He said many of the smaller communities they represent with 10,000 or fewer customers have systems that are more than 50 years old.

“We have sewer mains that are old, or they collapse. We have water lines that will crack in the winters and leak water out,” said Groh.

Groh added those systems often encounter lead service lines to the home. Wisconsin has replaced more than 115,000 lead lines since 2016, according to Wisconsin Watch. The investigative news outlet’s analysis found about 465,000 pipeline segments containing lead or other harmful materials still need to be removed.

In Milwaukee alone, city officials have estimated it will cost nearly $800 million to replace the city’s roughly 70,000 lead service lines. In a statement, Milwaukee Water Works superintendent Karen Dettmer said they will work with the state and Wisconsin Department of Natural Resources to put funding to use quickly when it becomes available.

“We’re excited that the bi-partisan infrastructure bill provides significant funding to improve water infrastructure and will allow us to accelerate our efforts to replace lead service lines across the City of Milwaukee,” said Dettmer.

“It just feels very backburner to me,” said Derek Beyer, steering committee member with Milwaukee’s Get The Lead Out Coalition. “When you consider there’s human beings, especially kids, unknowingly, being harmed by this, it’s outrageous.”

Beyer pointed to an ongoing criminal investigation within the Milwaukee Health Department. The Milwaukee Journal Sentinel has reported that the investigation seems to be linked to the city’s lead program. Former health commissioner Bevan Baker resigned in 2018 amid reports the department failed to offer services to thousands of families whose children tested positive for lead.

Children are more vulnerable to lead poisoning, which can cause developmental issues among other health problems. Lead pipes are the most common source of lead in drinking water. Children can also be exposed to lead through lead-based paint and other lead-based products.

A report released in 2019 by Wisconsin Environment and the WISPIRG Foundation gave the state a failing grade for not preventing lead in school drinking water. Last year, the U.S. Environmental Protection Agency updated its decades-old lead and copper rule to require public water supplies to test drinking water at schools and day care centers, as well as map all their lead service lines.

“When we’re talking about kids and schools, you know, really the only way to ensure safe drinking water is to get the lead out of them entirely,” said Megan Severson, state director for Wisconsin Environment. “We need the federal infusion of funding to just remove the lead service lines and to tackle all of the components in the schools.”

She added that President Biden’s administration would provide additional funding to address lead pipes as part of the Build Back Better legislation still being debated in Congress. The scaled back nearly $2 trillion reconciliation package would include another $9 billion for lead reduction. Industry and environmental advocates have estimated it would cost $60 billion to replace the nation’s six to 10 million lead lines.

Other funding Wisconsin is estimated to receive under the $1 trillion infrastructure bill:

Wisconsin may get more than $800M to upgrade water systems under the $1T infrastructure bill was originally published by Wisconsin Public Radio.