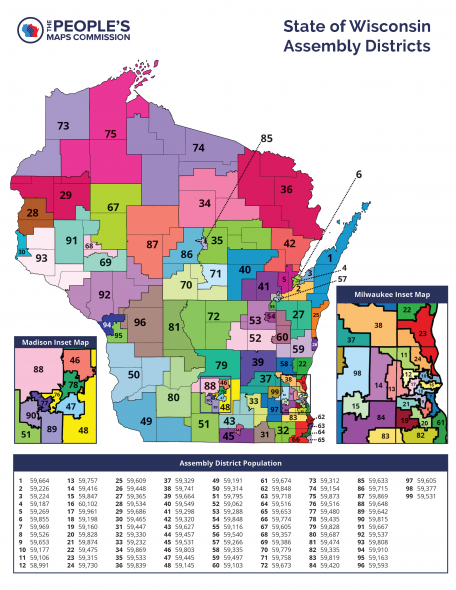 The commission of nine members of the public chosen by a panel of three retired judges worked for a year talking to people in 68 counties, reviewing nearly 2,000 submissions and consulting with experts. The commission was created by Gov. Tony Evers to create a nonpartisan method for redistricting in Wisconsin. Referendums or resolutions supporting a nonpartisan redistricting process have been passed in 56 of the state’s 72 counties.

The current maps, which were created in 2011 when Republicans controlled both the Legislature and governor’s office, have been called among the most gerrymandered in the country. The maps have cemented Republican control of the Legislature for the last decade.

The release of the commission’s maps comes one week after Republicans held a public hearing on their own proposed maps — which use the controversial and highly partisan maps from 2011 as a baseline and attempt to protect vulnerable Republican incumbents in a few parts of the state.

At the public hearing on the Republican maps, hundreds of citizens appeared in opposition to their proposal, with only Assembly Speaker Robin Vos (R-Rochester) and Senate Majority Leader Devin LeMahieu (R-Oostburg) speaking in favor during the hours-long meeting.

At the press conference Tuesday morning, Evers said if Republicans don’t change their proposal and accommodate the commission’s proposal, the GOP map is headed for a veto.

“Well, after hundreds of people packed a committee meeting to show their opposition to these gerrymandered maps, you might not be surprised to learn that only two folks testified in support — Majority Leader LeMahieu and Speaker Vos, the two people who, one could argue, might stand to benefit the most by putting together another set of gerrymandered maps modeled against the present gerrymandered maps we had for a decade,” Evers said. “Folks, Wisconsinites won’t stand for gerrymandering 2.0, neither will I. So let’s be clear today, if the Republican maps come to my desk as they’re currently drafted, I’ll veto them. It’s just as simple as that.”

With the promise of a veto, the next political maps in Wisconsin will surely be decided by a court. There are already several lawsuits over the state’s redistricting process in state and federal court. The Wisconsin Supreme Court has accepted one of the cases and has called for materials to help it create the maps. A panel of three federal judges is also preparing to hear a case and has said it will be ready to draw new maps.