The DNR also found that the state's air quality in general is improving.

By Danielle Kaeding, Wisconsin Public Radio - Oct 6th, 2021 01:07 pm
Get a daily rundown of the top stories on Urban Milwaukee 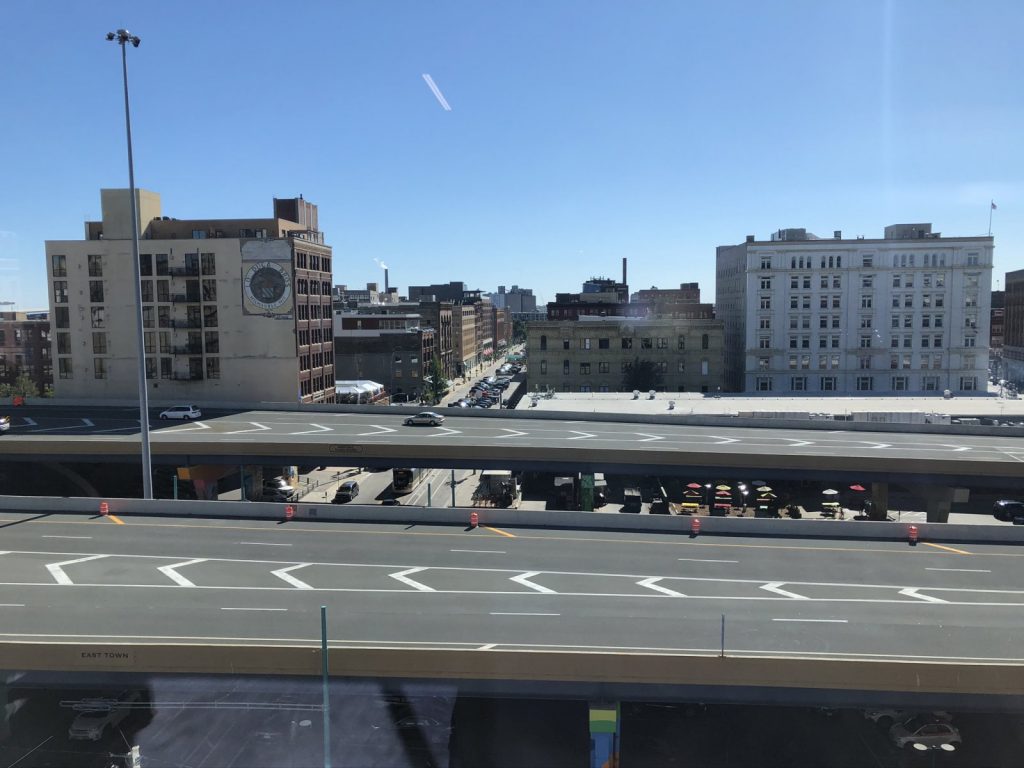 A new report from state environmental regulators found stay-at-home orders during the onset of the COVID-19 pandemic prompted noticeable declines in air pollution in Wisconsin last year. The reductions were short-lived, but long-term trends show air quality is improving across the state.

A snapshot of preliminary data from a Milwaukee monitoring site along Interstate-94 showed a drop in daily peaks of pollutants like nitrogen dioxide and carbon monoxide from vehicle emissions, according to the latest report on Wisconsin air quality trends.

“That was where we saw the most significant reduction, and, honestly, it was pretty temporary,” said Katie Praedel, air monitoring section chief for the Wisconsin Department of Natural Resources.

The DNR found nitrogen dioxide emissions, a forerunner of ozone pollution, dropped 14 percent at that one site compared to the same timeframe in 2019.

Power plant and industry emissions didn’t see a steep drop or any decline during stay-at-home orders. The findings are consistent with what one would expect to see from people traveling less during the pandemic, said Tracey Holloway, professor with the Nelson Institute of Environmental Studies at the University of Wisconsin-Madison.

“They did not see that much of a change in pollution from power plants and some industries, and that also is consistent because we’re still using electricity,” said Holloway. “We’re still running our air conditioners and the kind of things that drive a lot of demand for electricity were still happening.”

Despite the short-lived dip in vehicle emissions, Wisconsin has seen dramatic reductions in air pollution overall during the last two decades.

Sulfur dioxide emissions that often come from burning fossil fuels to provide electricity dropped the most with a 92 percent decline from 2002 to 2019. Emissions from nitrogen oxides and volatile organic compounds, which can interact with heat and sunlight to form ozone pollution, fell by 63 percent and 58 percent respectively from 2002 to 2017. Carbon monoxide emissions from vehicles dropped by 58 percent during the same timeframe.

The DNR monitors such pollutants to ensure they’re meeting federal standards that are designed to protect public health. The decline in air pollution is largely attributed to state and federal programs, and the largest reductions stem from the transition to cleaner vehicles and sources of energy.

Under the Clean Air Act, Holloway said regulators and industry have made great strides to reduce emissions, leading to cleaner air nationwide.

“I think a lot of people don’t realize that this is in many ways an environmental success story, but there are still large portions of the population that are breathing air, including in Wisconsin, that is above this health protective standard,” said Holloway.

Southeastern Wisconsin along the Lake Michigan shoreline has long struggled with ozone pollution that can cause short-term and long-term respiratory problems, exacerbating asthma and increasing the risk of chronic health issues. Nine counties aren’t currently meeting federal air quality standards, but the region has seen a 25 percent reduction in ozone concentrations on average since 2001.

“With a pandemic, it’s very important to have not just clean air, but the best air quality we can,” said Angela Tin, national senior director of clean air initiatives with the American Lung Association. “It’s kind of a wakeup call for us to say, ‘Well, you know, the air is improving, and we’ve all done a good job,’ but there’s still a lot more out there.”

Heat-trapping emissions of carbon dioxide are once again climbing higher after dropping in 2020, driving temperatures higher. Global warming has the potential to increase ground-level ozone pollution in the future and increase the risk of drought and wildfires that create fine particle pollution or soot.

“We still get the majority of our energy from things like coal, natural gas, other fossil fuels, all of which we know lead to precursor molecules and air pollutants that are affecting our lungs, affecting hearts, affecting our atmosphere,” said Andrew Lewandowski, a Madison pediatrician affiliated with Wisconsin Health Professionals for Climate Action. “And, so even though we’re seeing improvements, we still know that there’s a long way to go.”

A report released last year by the Global Health Institute at UW-Madison found producing 100 percent clean energy in Wisconsin would reduce air pollution and save $21 billion each year in avoided health care costs.

“We will continue working with our local, state and federal partners, along with several research organizations to ensure continued improved air quality trends, especially along our lakeshore and where groups are disproportionately impacted by air pollution,” said Gail Good, the DNR’s air program director in a statement.

According to the DNR, the entire state now meets federal standards for fine particle pollution as concentrations have decreased 35 percent since 2002.