Will 10 Years of Gerrymandering End?

The data shows huge advantage for Republicans. Will courts allow this to continue?

It is well known today that the Wisconsin legislative redistricting plan designed by the Michael Best & Friedrich law firm resulted in one of the nation’s most extreme gerrymanders.

The next graph shows the number of Wisconsin State Assembly seats likely to be won by Democratic candidates under the existing Michael Best gerrymander, created following the 2010 Census. The graph starts with the 2020 vote for each of Wisconsin’s 99 Assembly districts. Then I took away half a percent of votes from one party and gave it to the other party and recorded the number of seats won by each party. This process was repeated, resulting in estimates of how many districts each party would receive for votes between 35% and 65%.

Note that throughout the middle of this range—38% to 62%–Republican vote shares exceed Democratic vote shares. For example, winning 55% of the vote would give Democrats about 49 seats; for the same 55% vote share would give Republicans about 70 seats. 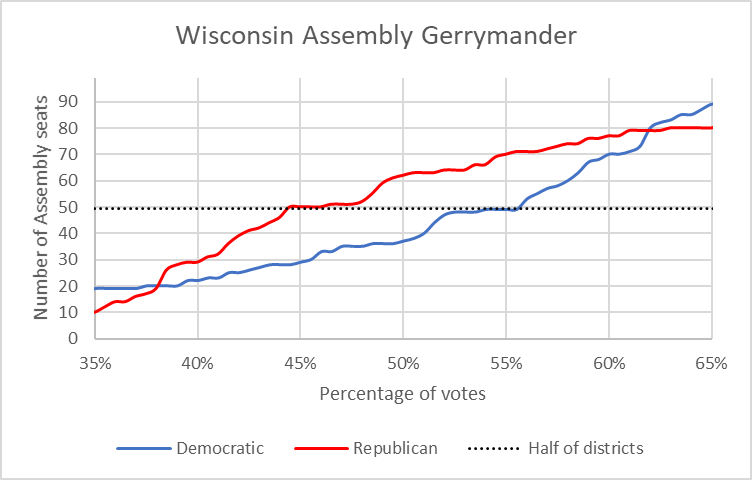 The next chart shows the midsection of the previous chart. A tied election gives Democrats about 37 seats compared to 62 for Republicans. A competitive election depends on Democrats winning more than 52% of the votes. 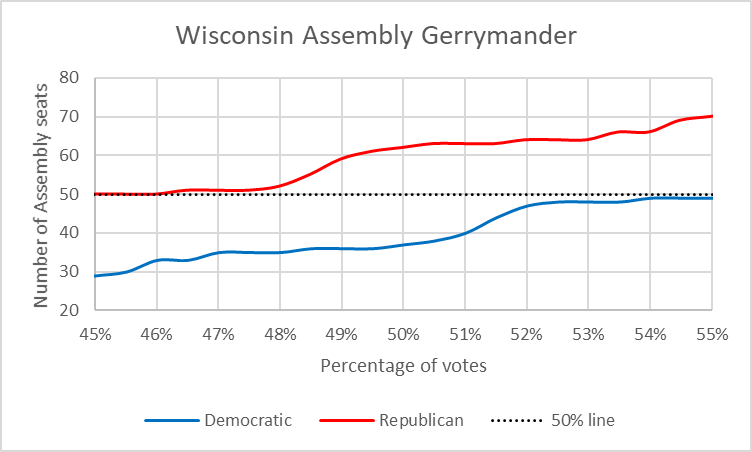 The remarkable stability in the Republican Assembly advantage is shown in the next chart. It shows the Democratic portion of the two-candidate election results in Wisconsin between 2008 and 2020. Three measures are shown:

In recent years Wisconsin has been very competitive if judged by the state-wide vote. As mentioned, Democrats won four of these seven elections. Judged by control of the Assembly, however, Wisconsin looks very much like a one-party state in the number of seats won by Republicans, whether judged by the actual outcome or based on the state-wide vote. Following the 2011 gerrymander, Democrats never came close to winning an Assembly majority. 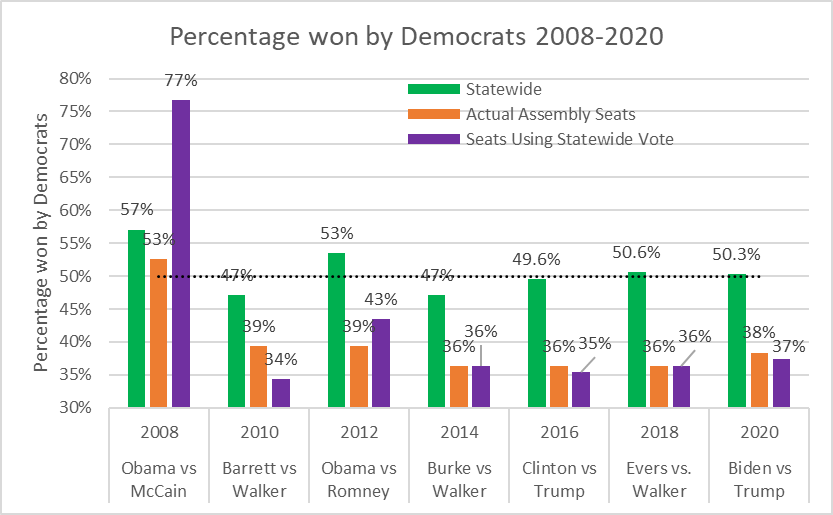 Of course, the Wisconsin Assembly is not alone in being skewed to favor one party or the other. The website Planscore, a project of the Fair Elections Project, scores state plans. In addition to the Assembly, it rates the Wisconsin Senate and the Wisconsin congressional districts as heavily skewed towards Republicans. This is not surprising. Senate districts each consist of three Assembly districts. The eight-member Wisconsin House delegation consists of five districts considered safely Republican, compared to only two safely Democratic. (Planscore also shows how U.S. House delegations and state senate and house delegations were skewed in many states dating back to 1972. It is clear from that site that Democrats can also surrender to the gerrymander temptation.)

What is likely to happen next? The Republican leaders of the Wisconsin Legislature have made it clear they hope to continue the gerrymander. 2021 Assembly JOINT RESOLUTION 80 mandates that the plan “retain as much as possible the core of existing districts …” As the media have pointed out, this rates as a major switch from 2011, when huge numbers of voters were moved from one district to another.

Thus, it is likely the Legislature will pass a plan heavily skewed to favor continued Republican control, regardless of what the voters decide. If so, Governor Tony Evers will veto it. Wisconsin redistricting will go to the courts. But which court will it be?

In past redistricting when legislatures and governors disagreed the issue went to a panel of three federal judges, who came up with a plan. In fact, such a panel has been formed. On September 21, it issued a scheduling order.

However, the following day, the Wisconsin Supreme Court agreed to take the case. Justices Rebecca Dallet, Ann Walsh Bradley, and Jill Karofsky dissented. The Legislature then requested the U.S. Supreme Court for an order (called a Writ of Mandamus or Prohibition) telling the federal judges to drop the case.

Clearly, Republican legislators believe the Wisconsin Supreme Court justices will be more sympathetic to their gerrymander than will the federal judges. Certainly in accepting the case the Wisconsin justices split along the familiar liberal-versus-conservative lines.

Yet I am not sure. The federal judges, while personally committed to democracy, may feel constrained by the recent U.S. Supreme Court decision which concluded that gerrymandering was a political question, not subject to judicial review.

The Wisconsin Supreme Court is not subject to that ruling. One can only hope that it will strike a blow for democracy in Wisconsin and the nation.