How Biden Plan Could Help State 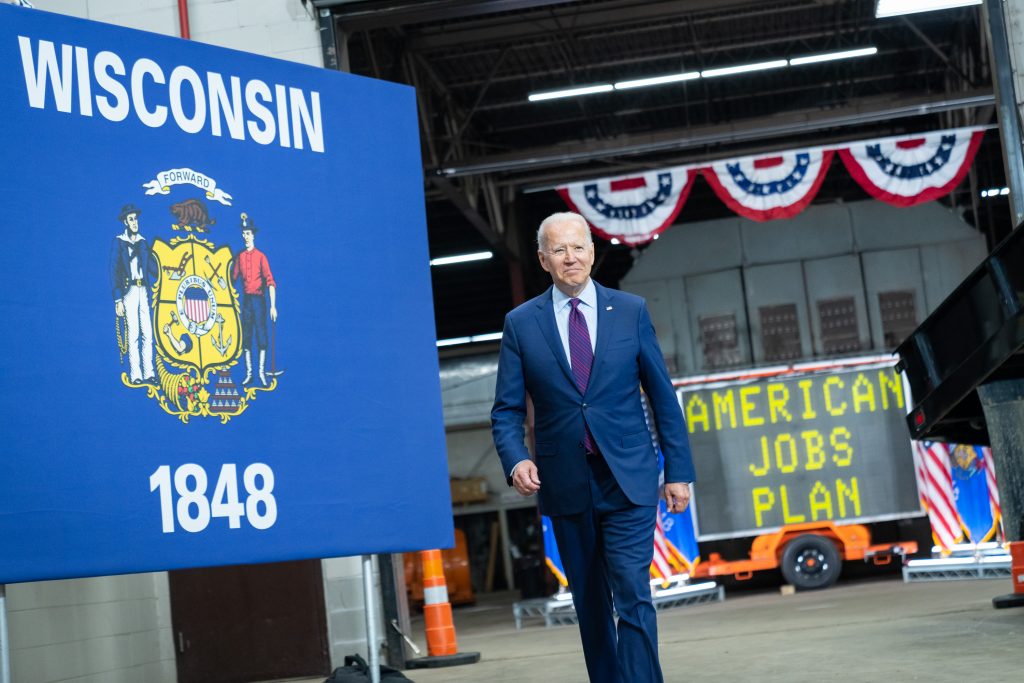 In Washington, D.C., two intertwined pieces of legislation are ensnared in bickering among House and Senate Democrats while Republicans mostly look the other way.

But this week, a pair of conversations 850 miles west of the nation’s capital brought the potential impact of those bills home to Wisconsin — a brief slice of real life amid the messy sausage-making that is government.

Over the lunch hour on Tuesday, Republican and Democratic lawmakers reflected on how the infrastructure agenda of President Joe Biden’s administration could benefit the state — an agenda centered on tackling climate change while, its supporters hope, it paves the way for an economic rejuvenation that will produce good jobs for new, green industries.

Thirty minutes after that discussion ended, another one began in which a trio of Wisconsin residents explained how a bundle of reforms — measures that are part of that same Biden agenda — could make their health care more affordable, accessible and effective.

The breadth of those two topics — health care and the green economy — demonstrates how monumentally ambitious a goal the White House has set for itself in the current legislation. Tuesday’s virtual discussions took those ambitions from lofty abstractions to their concrete potential for changing Wisconsinites’ lives.

At the center of both discussions were the bipartisan infrastructure bill that has already passed the U.S. Senate and a separate, broader budget reconciliation package. That second package, now nicknamed the “Build Back Better Budget,” is being shepherded through Congress in a procedure that allows Senate Democrats to pass it with a simple majority instead of having to clear the 60 votes needed to keep Republicans from blocking it.

The first discussion was hosted on Zoom by WisPolitics.com/WisBusiness.com and the Wisconsin Environmental Initiative, a nonprofit group that promotes making the environment and sustainability top priorities when addressing economic issues. It explored what both pieces of infrastructure legislation might mean for Wisconsin’s move to a greener economy.

Besides funding for new road, highway and bridge repairs, the bipartisan bill would bolster the nation’s energy grid from service disruptions caused by severe weather, according to David Kieve of the White House Council on Environmental Quality. “We can’t let what happened in Texas in February, and what’s currently happening in Louisiana as the result of Hurricane Ida, happen to Wisconsin,” Kieve said.

Additional provisions in the separate budget package “address the root cause of the climate crisis,” he continued, citing tax incentives to encourage consumers to choose cleaner forms of power and a combination of financial carrots and sticks for power companies to stop using fossil fuels to generate electricity. Meanwhile, elements of both packages will help encourage the production of more electric vehicles, Kieve added.

Taking part in the Zoom discussion, state Rep. Greta Neubauer (D-Racine) pointed to other provisions that would replace lead pipes and expand broadband internet access — both throughout the state. Programs such as those “would mean that we are able to truly transform the economy and move forward into the next century,” she said.

Neubauer considers the infrastructure bill’s transportation provisions particularly promising, with $590 million for public transit in Wisconsin and expansion of electric vehicle charging stations in the state. Across the state, the package of bills could create “an estimated 266,000 good jobs,” she added.

State Sen. Robert Cowles (R-Green Bay) said he would welcome the federal help to expand battery resources that would bolster the state’s growing solar energy grid.  “Our solar fields, which are popping up across the state, work very nicely,” Cowles said. “I’m not saying we can totally wipe out the carbon footprint” from electric power generation, he added, “but we can do more.”

The second conversation, also on Zoom, was organized by Protect Our Care, an organization that formed to mobilize support for the Affordable Care Act (ACA). Sen. Tammy Baldwin (D-Wis.) led off that discussion, reciting several items that would build on the 10-year-old federal health care law.

One would expand the federal Medicare program to cover vision, dental and hearing. Milwaukee retiree Stephanie Stein cited a survey from the lobbying group Families U.S.A., which found that “over half of people 65 and older never see a dentist, because they understand that when they’re told what they need to do … they just aren’t going to be able to afford it.”

Another would allow the federal Medicare program to negotiate for better prescription drug prices, as it does for all other medical services. Baldwin said doing so was expected to have a broader impact, lowering drug costs for many more people than just Medicare beneficiaries.

“This is not just a senior citizen issue,” said A.J. DePre, a La Crosse resident who struggled to pay for drugs prescribed for attention deficit disorder and anxiety — medications that DePre has found essential in order to work. “This is affecting families and children and young adults that are just trying to live.”

The proposed health care expansion would also establish a program to extend the ACA’s enhanced Medicaid benefits to the 12 states, including Wisconsin, where state legislatures have so far refused to accept the federally funded expansion. Baldwin said that could provide coverage to 91,000 people in Wisconsin who don’t qualify for Medicaid and can’t afford private insurance, even under the ACA.

Yet another provision would make permanent temporary changes, first included earlier in 2021 in federal COVID-19 relief legislation, that would lower premium costs under the ACA for people who purchase health insurance through the federal marketplace.

One of the ACA-related changes increases the subsidies that make policies more affordable based on a person’s income. Another makes it easier for people who get those subsidies to keep getting them even when their income rises.

When her husband retired before he was eligible for Medicare, said Connie Meyer of Green Bay, the couple purchased a policy under the ACA. Subsidies helped make the policy affordable, but as originally structured, those subsidies would have ended when their income increased, creating a fiscal “cliff,” according to Meyer.

“It de-incentivized us [from working],” Meyer said. “And that was very frustrating for me because I feel like I have things to contribute still.”

Unlike the infrastructure talk, this one was a straightforward pitch for participants to lobby their federal lawmakers. To spread the message, Protect Our Care aired the event on Facebook Live.

“This is our moment to prove to the American people that their government works for them, not just those at the top,” Baldwin said. “Tell Congress, it’s time to pass the Build Back Better Budget legislation that makes the wealthy pay their fair share of taxes so we can lower your health care costs.”

Wisconsin could see major changes if Congress passes ‘Build Back Better’ was originally published by the Wisconsin Examiner.