Board Gets Messy With Vaccine Mandate 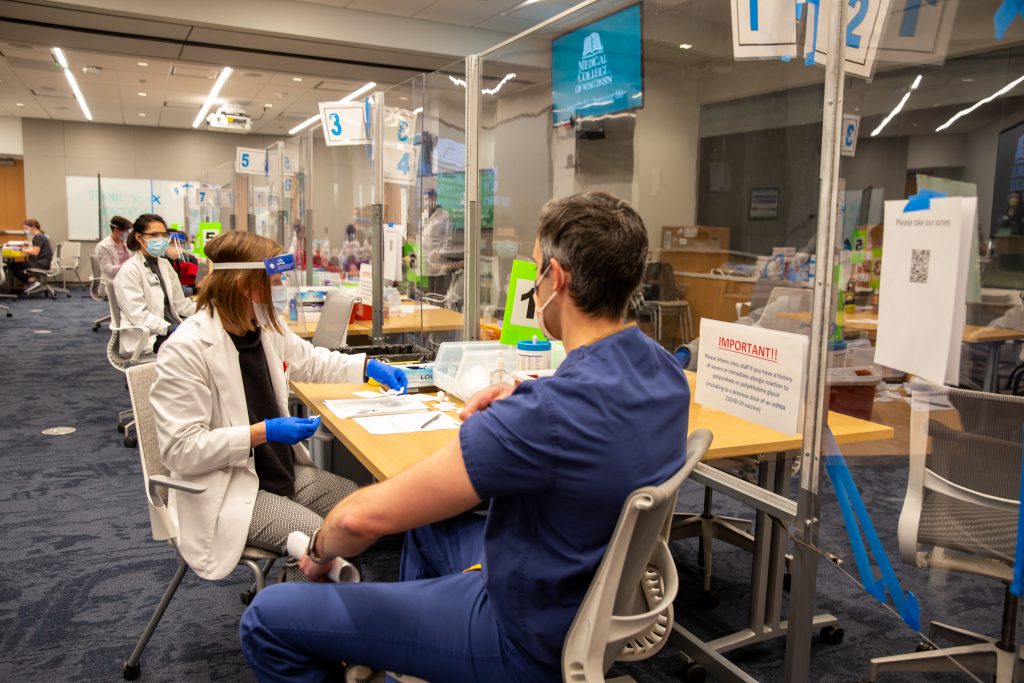 The Milwaukee County Board is complicating County Executive David Crowley’s vaccine mandate for county employees, which he announced in late August.

As the county executive’s administrative order winds through the board’s review process, questions about whether proper procedure is being followed and potentially redundant legislation are confusing the undertaking.

Sup. Sylvia Ortiz-Velez attended the meeting to tell her colleagues that their committee did not have the “policy and rulemaking authority to take action on this item.” Citing the county ordinances and state statutes regarding emergency management and rulemaking authority, Ortiz-Velez pointed out that the correct body to consider the county executive’s order was the Judiciary, Safety and General Services Committee.

Corporation Counsel Margaret Daun said that Chapter 99, of the county’s code of ordinances, “is a bit of a mess.” She said, “There are errors, there are inconsistencies, there are conflicts within state statute.” Daun said the law confers “shared authorities” among the branches of county government. “It is a blending,” she said. Responding to a question about executive emergency powers Daun said the law provides the executive with the ability to act first during a crisis, adding “State statute clearly confirms unilateral authority to this county executive to declare emergency and issue related orders.”

At that committee meeting in June 2020, and in her most recent communications with supervisors, Daun did stress that the board retains the power to at any time review, withdraw or amend the emergency orders issued by the county executive.

At the Finance Committee Friday, Ortiz-Velez said Daun emailed her confirming that the county executive’s orders under his emergency powers should be going through the Judiciary committee. Ortiz-Velez provided the email to Urban Milwaukee. In it, Daun says the county’s ordinance governing emergency management, “in its current form mandates that the Judiciary committee is the correct committee to take action on emergency and related orders issued by the CEX [county executive]. I will advise the chairwoman of this separately.” Daun goes on to say, though, that, “this ordinance does not extinguish the power of the CEX to issue them in the first instance.”

Get a daily rundown of the top stories on Urban Milwaukee
Sup. Willie Johnson Jr. said the orders have been directed to the finance committee “as a matter of practice.” It is within the authority of the chairperson of the board, Chairwoman Marcelia Nicholson, to refer legislation to committees. Sup. Joseph Czarnezki suggested that the committee send the legislation forward to the full board so that it could be sent back to judiciary for consideration that meets the procedure laid out in the county ordinance.

Before Ortiz-Velez took the floor to air her concerns, Sup. Shawn Rolland also asked about the process for referring executive orders, and Deputy Corporation Counsel Scott Brown said the judiciary committee was the proper venue under county ordinance. But he added a caveat that the chairwoman has the discretion to refer the item to finance, and that he’s “aware of no legal impediments in statute ordinance or case law to the finance committee taking up the informational report.”

However, shortly after the counsel told this to the board, Sup. Jason Haas, chair of the committee, entered a “by-the-committee” resolution officially supporting the county executive’s order, turning the “informational report” into an action by the committee.

Ortiz-Velez said to the committee that “since there is a likelihood of litigation” over the county executive’s vaccine mandate, “let’s cross our T’s and dot our I’s, and follow the rules.”

One source told Urban Milwaukee that the Wisconsin Institute for Law & Liberty (WILL) is working on a suit against the county over the vaccine mandate. Asked whether they were planning such a legal action, a spokesperson for WILL, Collin Roth, said, “As a matter of policy and confidentiality, WILL does not discuss potential cases or potential clients.”

As Urban Milwaukee reported, Crowley’s order was significantly more detailed than Clancy’s resolution in its prescriptions of negative consequences and incentives related to the vaccine mandate. Clancy had communicated with the county executive both before and after he drafted his resolution.

Clancy said he wanted his resolution approved by the board to demonstrate “that we’re in this together,” saying that failing to do so could single out elected officials to be targeted or threatened.

But when he said this, the committee had already passed a resolution unanimously approving the county executive’s order. Steve Cady, policy and research director for the county, informed the committee that when the board considers two resolutions on the same subject, the most recent action will render any previous action moot.

The committee couldn’t agree whether Clancy’s resolution or Crowley’s orders were in conflict, but it was agreed that the county executive’s order was surely more detailed. Deputy Corporation Counsel Brown said, “I don’t necessarily see a lot of conflict.” But he also agreed with Cady that “If there were found to be conflict between the two resolutions, the second one would be the controlling one.”

Supervisor Shawn Rolland, taking the floor at committee said, “I’m trying to track where we are.” He noted, as most of the committee had, that Clancy’s resolution did not have detailed policy prescriptions like the county executive’s, especially pertaining to vaccination incentives.

Cady chimed in, “I just want to point out that you have a lot of employees that are watching this, and they’re looking at this, and they see language gets adopted that’s different from what the county executive’s ordered, it could create some confusion and already there is quite a lot of anxiety about this topic.”

Rolland took the floor again and said, “Given that the spirit of this resolution is to show our support for the executive’s order, in my view we’ve already indicated our support. We’ve all spoken on it; we’ve all voted on it. It seems item seven could create some confusion.”

The committee, which did indeed seem confused, went on for nearly another 20 minutes discussing what to do about the legislation. Czarnezki thought both should be sent to the full board for discussion and consideration. Clancy remained steadfast that he wanted his resolution passed.

Ultimately the committee voted to table the resolution and await the call of the board chair on the matter.

Correction: Information was added to the story to clarify that corporation counsel has consistently told county supervisors they had the power to review, withdraw or amend emergency orders issued by the county executive.

One thought on “MKE County: Board Gets Messy With Vaccine Mandate”