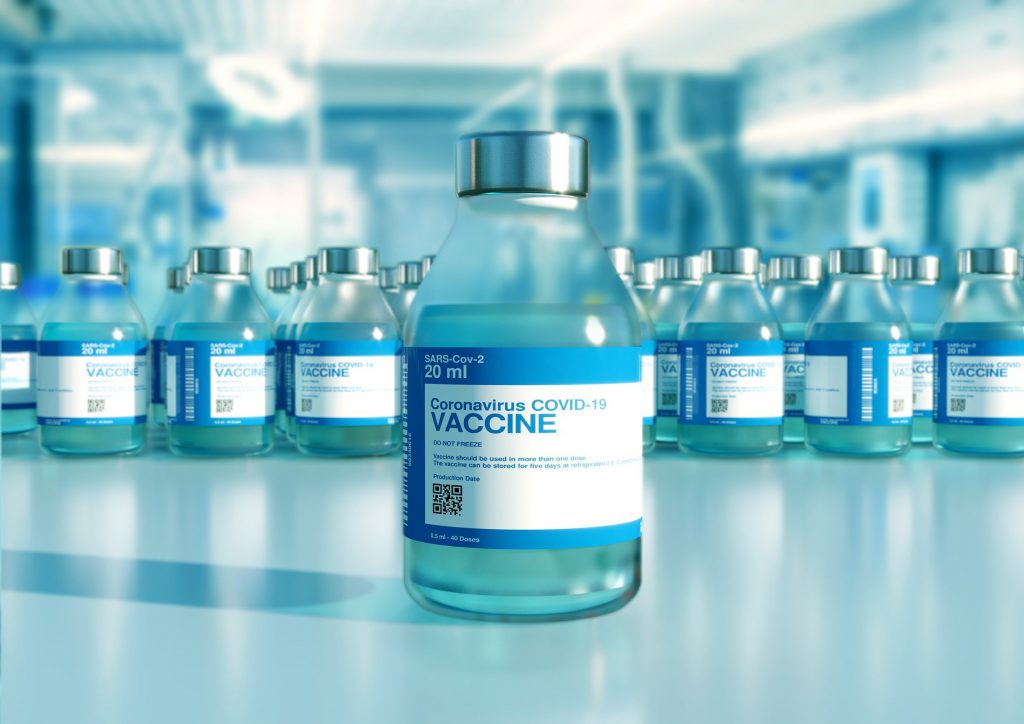 When President Joe Biden gave his speech outlining the steps he planned to reduce the spread of COVID-19, many Republican governors reacted with fury:

Despite the vitriol, the governors might be secretly thanking Biden for rescuing them from a no-win situation.

The next chart shows the average number of new daily cases per 100,000 residents of each of those governors’ states during the week of September 6th to September 13th of this year. It also shows the deaths per 100,000 people over the same period. The cases are at the left and deaths (in darker coloring) at the right for each state.

The graph also shows cases for the United States as a whole, for Wisconsin, and for two typical eastern seaboard states. Note that all the states whose governors were quoted above have caseloads greater than the nation, as well as that of Wisconsin and the eastern states.

With two exceptions, Alaska and South Dakota, the same could be said of their death rates. It seems likely that the exceptions reflect the time lag between when a case is first recorded and when it leads to death. 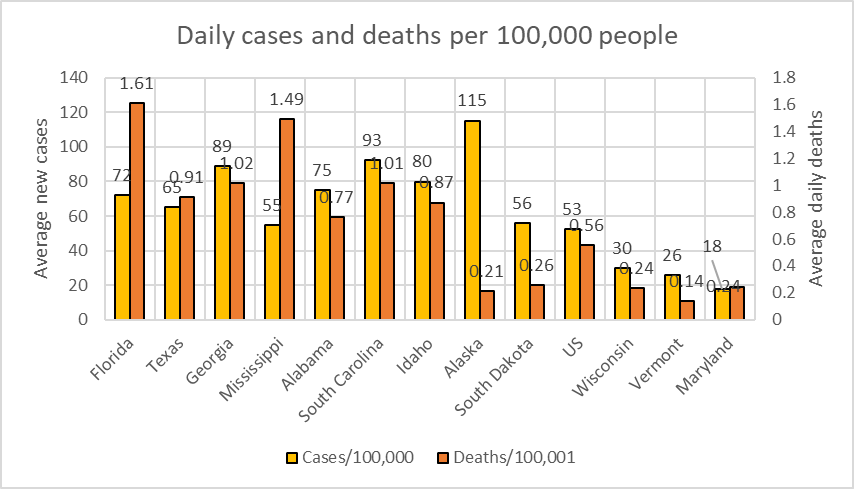 Of the nine states on the left of the chart above, whose governors I quoted attacking Biden’s plan, only one supported him in the 2020 election. However, Georgia, the exception, is totally controlled by Republicans.

The next graph explores the connection between COVID-19 cases and the political orientation of the states. The horizontal axis shows the percentage of the two-party vote in last year’s election. The vertical axis shows the average daily cases during the same 7-day period as before.

Although there is some scatter, there is a definite trend: the higher the Republican vote, the more Republican the state, the more cases of COVID-19 the state faced. In statistical terms the relationship between cases and party accounted for about 40% of the variation in cases, as shown by the R2 of 0.4165. 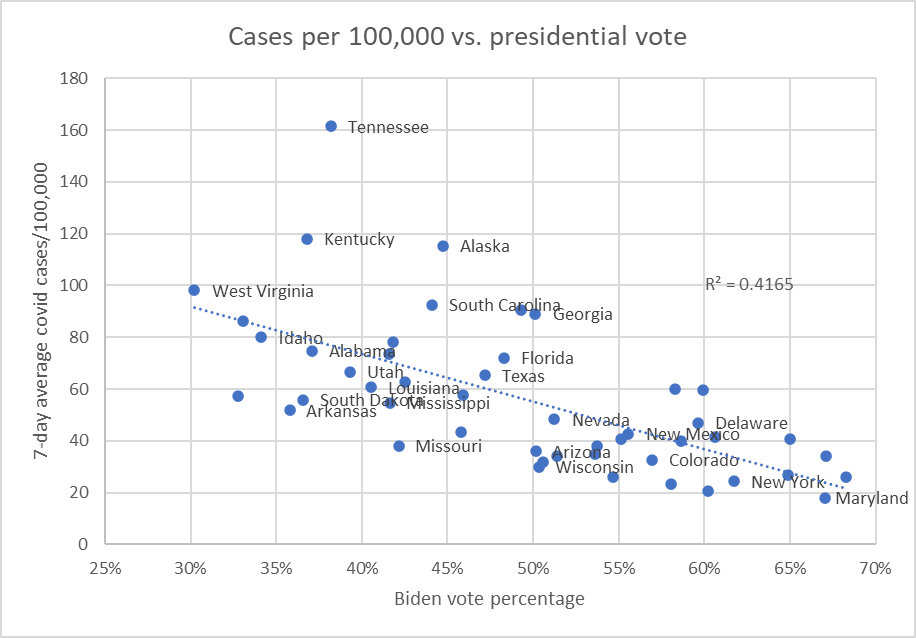 The next graph extends the analysis to deaths from COVID-19. Although not as strong as with cases, there is still a relationship between political leanings and deaths. Florida, whose governor seems hell-bent on driving up both cases and deaths, leads the nation in the number of COVID-19 deaths. 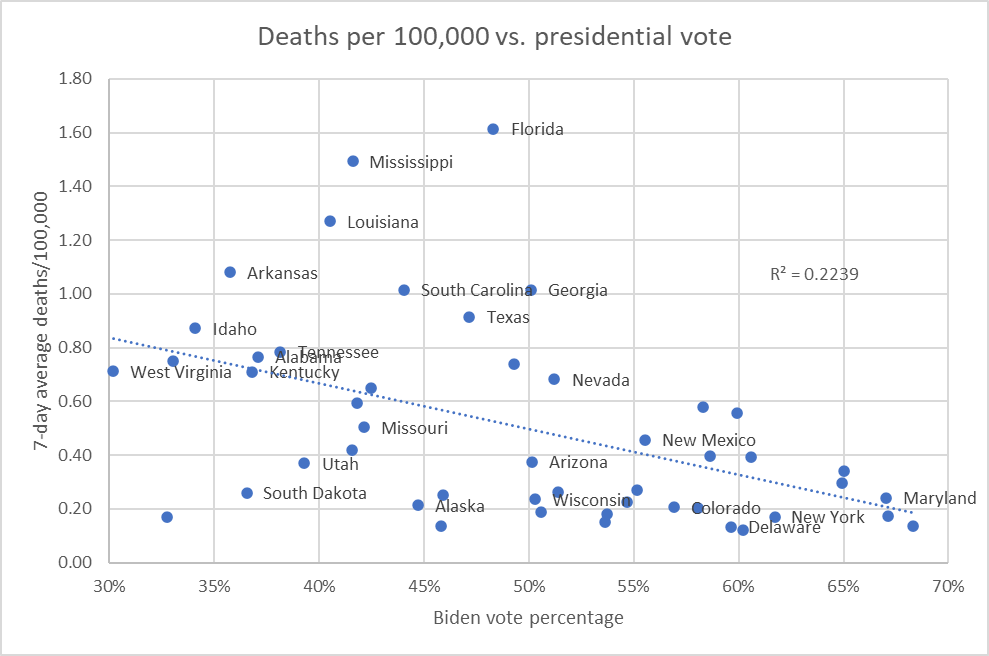 The lower rate of cases for Democratic states may point to differences in how the states have handled the pandemic, in particular the likelihood that people in those states were vaccinated.

The next graph plots the states’ COVID-19 cases against the percentage of the total population fully vaccinated as of September 11, 2021, based on CDC data. Although the fit is slightly stronger than when cases are compared to the presidential vote, they both tell the same story. Once again, Tennessee, a state that recently forced out its health commissioner, has the highest number of cases when adjusted for population. 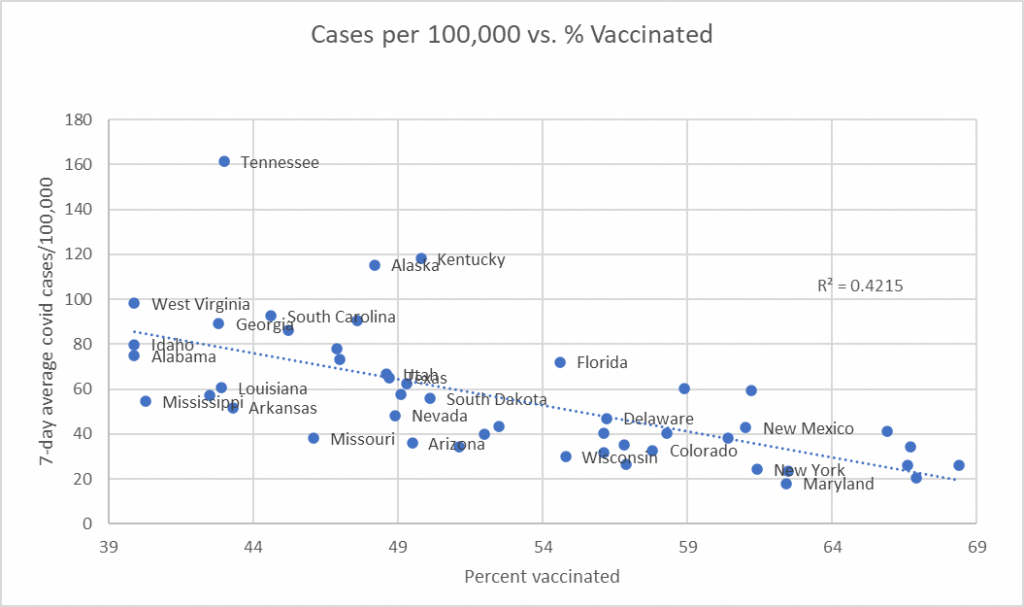 Finally, the next graph plots the relationship between deaths from COVID-19 and vaccinations. Once again, Mississippi and Florida have the highest number of deaths when adjusted for population, but the relationship is somewhat stronger than it was with presidential voting. 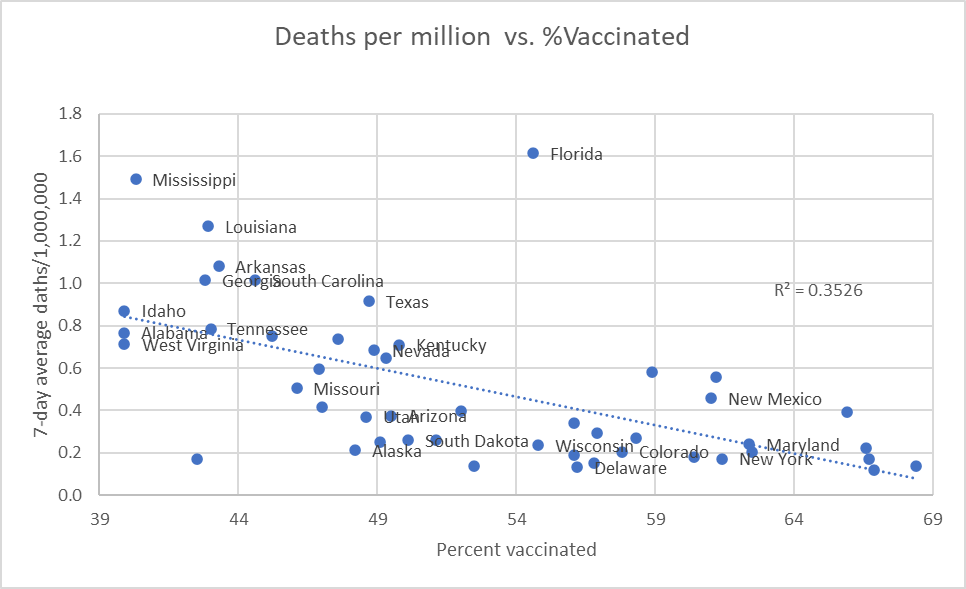 Deaths per million vs. % Vaccinated

It turns out that the 2020 presidential election is a very good predictor of how many people have been vaccinated. As shown in the next graph, there is a strong relationship between the presidential vote counts and the percent of people who are vaccinated.

Throughout these plots, Wisconsin falls near the middle of all the states, reflecting its very close presidential vote. Its case rate of around 30 per 100,000 is slightly better what would be predicted using either its presidential vote or its vaccination rate, but still dangerously high.

For comparison, early in the pandemic, New York required travelers to isolate themselves if they came from states with a case rate greater than 10 per 100,000 residents; Chicago’s limit was 15 per 100,000. The Wisconsin Supreme Court decision taking away the state health department’s ability to fight the virus did not help. 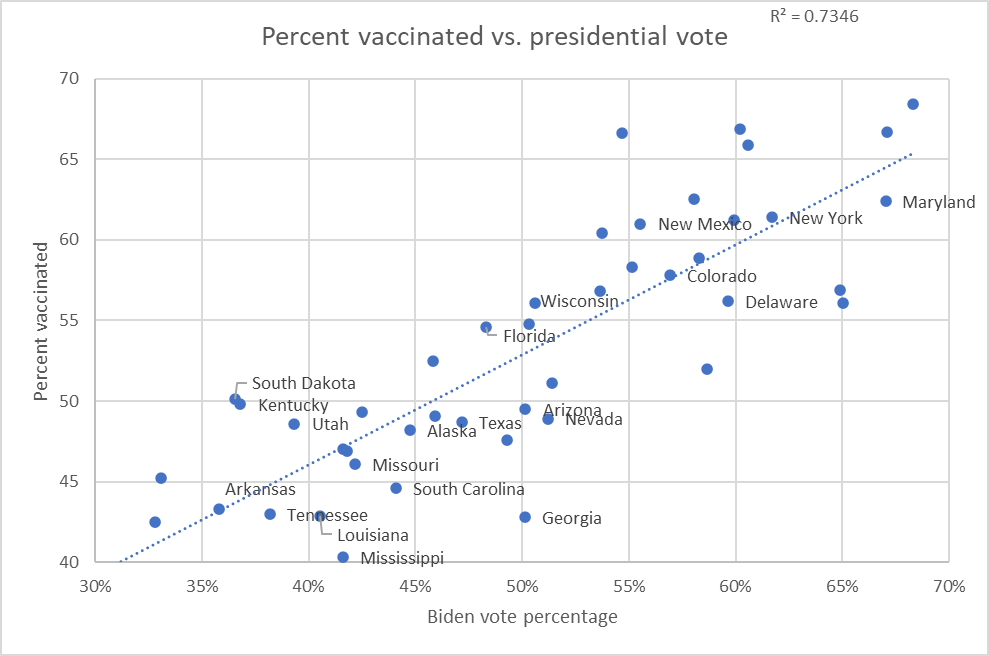 Not surprisingly, this means states that supported Donald Trump are far more dangerous than those backing Biden. As the next graph shows, states supporting Biden accounted for a larger share of the US population than did those supporting Trump—by a ratio of 58% to 42%. Yet the ratios of cases and deaths are reversed. The result is that a person living in a state that went for Trump has about three times the probability of dying from COVID-19 as someone living in a state that voted for Biden. 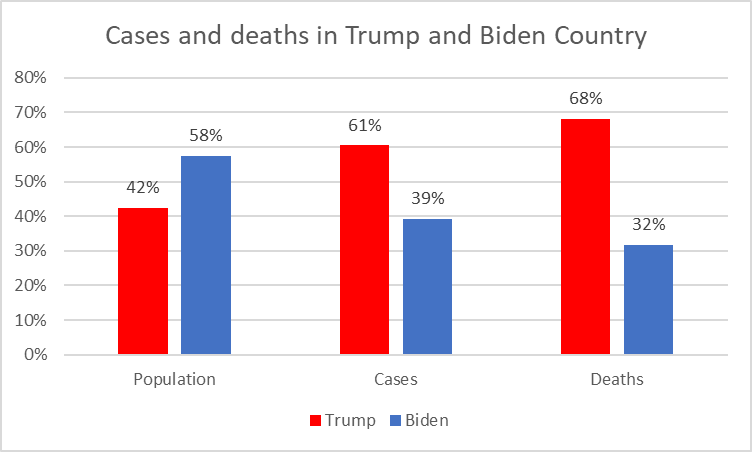 Cases and deaths in Trump and Biden Country.

Republican governors in Republican states are faced with a near- impossible situation. The anti-vaxxers have become a significant portion of the Republican base. Recently it has been reported that the United States has the lowest vaccination rate of any wealthy country, suggesting that we are reaching the limit of how much asking people to voluntarily take the shots can accomplish.

Yet to propose more coercive methods, such as tying employment to being vaccinated, will antagonize that part of their base. Republican governors in Republican states face a no-win situation. To substantially increase vaccinations requires the very measures included in the Biden plan. But for a Republican governor to do so will antagonize a substantial portion of the Republican base, likely leading to a more ideological candidate in the next Republican primary or, in the event of surviving the primary, having a significant part of the base sit out the general election.

In this light, President Biden’s plans to push more people to get vaccinated, whether they like it or not, offers a lifeline to these governors. Assuming Biden’s strategy is successful, the number of unvaccinated people will decline, especially in Republican states. This will lead to a decline in crowding in hospitals and fewer deaths from COVID-19. Thus, Biden’s plan has the potential to rescue Republican governors from an impossible situation.

Ironically, Biden’s plan offers Republican governors an escape from the box they have managed to put themselves in. Meanwhile, they will be free to continue their attacks on Biden the tyrant.