Playbill Lofts Will Rise Above The Avenue

Former Majestic Lofts apartment building being redeveloped by owners of The Avenue. 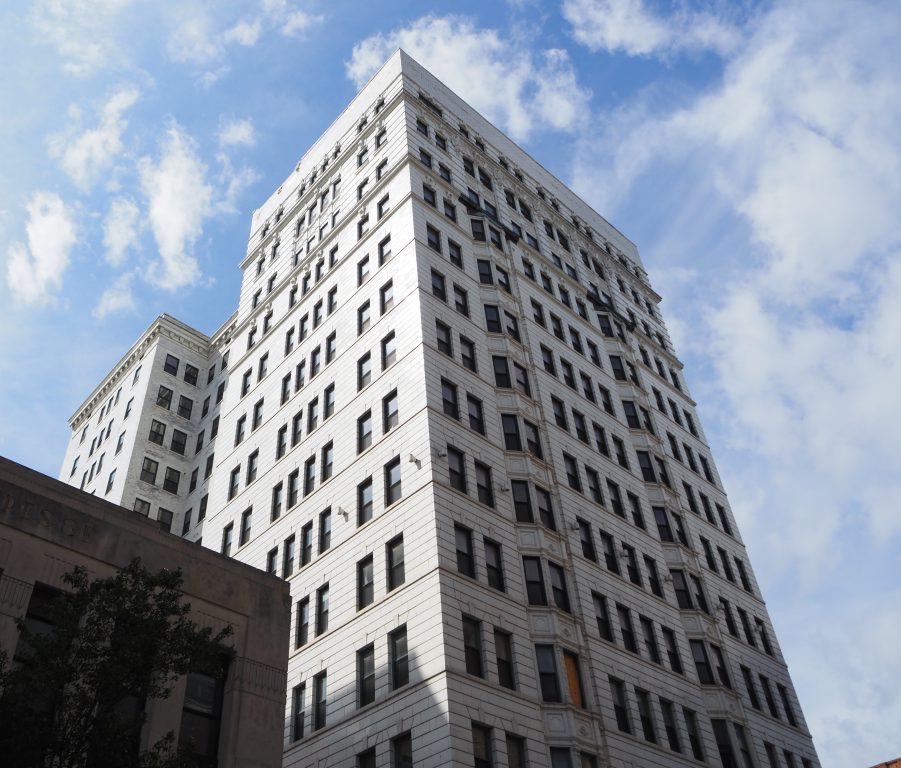 The developers of The Avenue are redeveloping the 14-story Majestic Building, 225-233 W. Wisconsin Ave., into a new apartment complex, Playbill Lofts. Built in 1907 for the Schlitz Brewing Company, the building formerly contained The Majestic theater at the rear of its lower levels and office space above.

But the theater didn’t survive the Great Depression, and the first two levels were absorbed in the Shops of Grand Avenue mall in the 1980s, with the first-floor long occupied by a Walgreen’s convenience store.

The office space, owing to the building’s narrow floor plates, was no longer conducive to modern tastes by 2003 and Zilber Ltd. sold the building to Gorman & Company for redevelopment.

Gorman’s Majestic Lofts, which opened in 2004, offered a mix of market-rate and affordable apartments through the low-income housing tax credit program. But those credits expired after 15 years and the building was in need of rehabilitation.

Business partners Josh Krsnak and Tony Janowiec led an investment group that acquired the building for $10.55 million in October 2019. They had previously acquired the first two floors as part of their purchase of the mall in 2016.

Krsnak, during a tour Wednesday, said by unifying the ownership of the building the partners are able to safely access and resell historic preservation tax credits. Without unified ownership, a non-sensitive alteration of the retail space could invalidate the credits used on the housing portion. Such a move would create a $4 million budget hole in the $10 million renovation.

The building itself has a dumbell shape, with indentations at its mid-point to bring in more natural light.

“Almost all of the units are like they are corner units,” said Krsnak of the resulting layouts.

The developer isn’t abandoning affordable housing as part of the redevelopment. But his firm won’t have the competitively awarded housing tax credits (now awarded for 30-year periods) to subsidize it.

Instead Krsnak and Janowiec are creating what is known as “naturally occurring affordable housing” by keeping their costs low, including things like leaving a drop-ceiling in place in the hallways and not replacing the 15-year-old windows.

The developer told Urban Milwaukee 20% of the units, a mix of large studios and one bedrooms, will rent for $979 per month. It’s a price that effectively meets the federal tax credit target of charging no more than 30% of a household’s income for those making 60% of the area median income.

But Krsnak and Janowiec didn’t acquire an empty building. Tenants were allowed to stay, as is required by law, but none elected to. Instead they took up the partners’ offer of unpaid rent forgiveness and covered moving expenses to four other buildings.

Krsnak called it a “win-win” born out of a potentially difficult situation. Residents got new housing and didn’t face any negative impact for their pandemic-induced unpaid rent. The developers got a building primed for redevelopment earlier than expected.

But plenty of challenges remain in the building. A number of units have smaller rooms or unusual floor plans that Krsnak said he was considering how to reconfigure.

There is also a series of two-story units in the middle of the building, due to a support structure that is likely the top of the former vaudeville theater.

A series of steel beams crisscross the fourth floor, appearing seemingly out of nowhere in certain units. Gorman repurposed a two-story interior space caused by the supports into a gymnasium and appears to have added new supports, but a sound issue still required the basketball court to be carpeted. Krsnak intends to use it as a co-working space.

The larger issue is that the steel pieces cut off the hallways, triggering Gorman’s two-story solution to create leasable space on the inaccessible floor. Krsnak will have a tough time dividing the units into more logical one-level layouts, but is considering options.

Other amenities in the building, including an approximately 10-seat movie theater, will be updated while others, including a computer lab, will be repurposed.

The second story of the building, last a Radio Shack and narrow hallway to give the apartments direct mall access, is being gutted and merged back into The Avenue’s office space. It could be also be used for up to five apartments.

A new, wider hallway will provide direct access into The Avenue office space and an interior connection to the 3rd Street Market Hall and skywalk system. Krsnak believes the units will be popular with those working in the attached complex.

The first floors will be ready for occupancy in October. A leasing website will launch after Labor Day weekend.

It is the second apartment building Krsnak and Janowiec have developed together as part of $137 million The Avenue project. The partners also created the Plankinton Clover Apartments from the second story retail space in the Plankinton Arcade building. 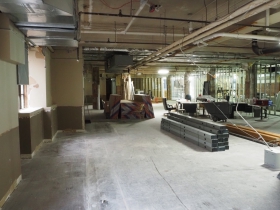 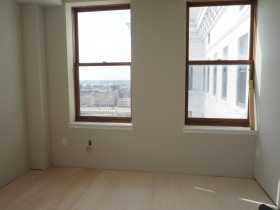 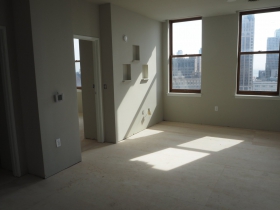 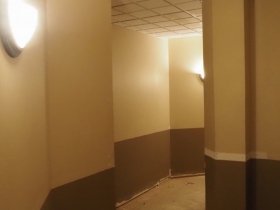 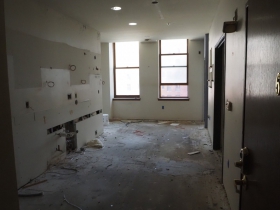 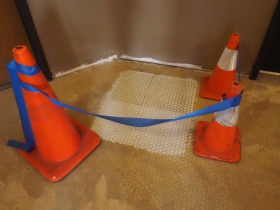 One thought on “Eyes on Milwaukee: Playbill Lofts Will Rise Above The Avenue”