Admits this on conservative TV show. One of 30 Republican senators who voted no. 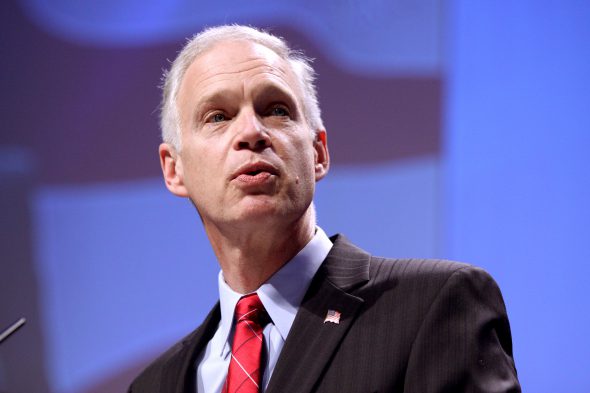 Sen. Ron Johnson was one of 30 Republicans who voted against the recently passed $1.2 trillion infrastructure bill — yet in an appearance on the conservative Dan Bongino Show, Johnson said he hadn’t even read the bill.

The package passed the Senate last week but has not yet passed the House of Representatives. It could bring billions of dollars to Wisconsin to repair roads and bridges, expand internet access across the state and replace lead pipes; 19 Republicans, including Senate Minority Leader Mitch McConnell (R-Ky.) voted for the bill.

Johnson noted the bill’s 2,700 page length and its price tag in his public statements about the vote, but later said he didn’t read it.

“And, I’ll be the first to admit, I didn’t read the thing,” he said on the Aug. 12 episode of the Dan Bongino Show. “I was able to glean pretty quickly on that there was no way I was going to be able to support that pig…”

Democrats in Wisconsin say Johnson admitting he didn’t even read the bill is another sign of his failure as a leader in the state.

“Once again, Ron Johnson’s complete lack of leadership and disregard for the office he holds is on full display,” Philip Shulman, spokesperson for the Democratic Party of Wisconsin, says. “In refusing to even read the bipartisan infrastructure plan, Ron Johnson sent a very clear message to Wisconsinites that their interests and needs don’t matter to him.”

A spokesperson for Johnson did not answer questions about Johnson not reading major legislation, only providing his statements about the infrastructure bill and Democrats’ related budget plan.

“What’s so unfortunate about the infrastructure bill that just passed is we could have accomplished both goals by repurposing money from the Democrats’ 100% partisan ‘COVID relief’ bill that isn’t even spent until 2022 through 2028,” Johnson said in his statement. “Instead, the bill’s supporters deceived the public into thinking their bill was ‘paid for’ by using smoke-and-mirror gimmicks. The Congressional Budget Office didn’t buy their fuzzy math and said their bill will add $256 billion to our national debt. There’s no way I would support that deception from the swamp’s big spenders. This is just the first step in the Democrats’ plan to pass their $5 trillion-plus radical tax-and-spend agenda, and I simply couldn’t help facilitate it.”

Johnson has repeatedly cited the budget deficit as one of the issues most important to him. Yet, in 2017, Johnson was a key Republican vote for passing a major tax overhaul which the Congressional Budget Office has said would increase the budget deficit by nearly $2 trillion.

Last week, Propublica revealed that Johnson’s advocacy in the 2017 legislative effort led to a major tax windfall for his biggest donors and some of Wisconsin’s most powerful billionaires — Diane Hendricks, as well as Richard and Liz Uihlein.