Legislation would bar towns from suing polluters if they accept a cleanup grant.

By Danielle Kaeding, Wisconsin Public Radio - Jul 16th, 2021 12:11 pm
Get a daily rundown of the top stories on Urban Milwaukee 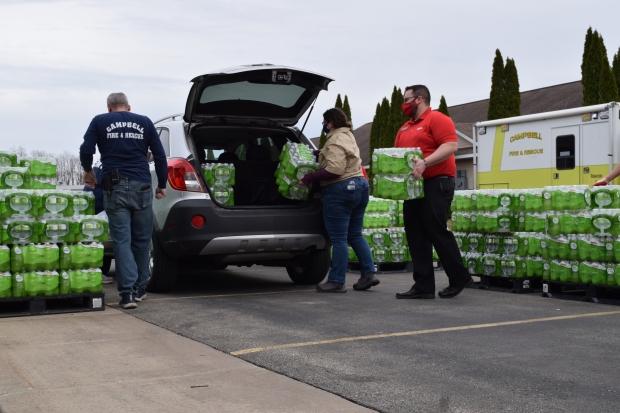 State environmental regulators may not be able to hold polluters accountable for PFAS contamination under a bill that recently passed the state Assembly, according to a memo from the Wisconsin Legislative Council. But, the state’s largest business lobby said that would be an “improper interpretation” of the legislation.

The proposal introduced by Republican Rep. Elijah Behnke, of Oconto, would create a new $10 million grant program to help communities clean up PFAS pollution, but it would bar them from taking legal action against those responsible for the contamination.

The July 1 memo requested by Democratic Rep. Katrina Shankland, of Stevens Point, said the bill may also prevent the Wisconsin Department of Natural Resources from taking enforcement action against polluters under the environmental remediation law.

“While the bill does not explicitly reference DNR enforcement actions, it precludes any action (emphasis included) against ‘any person alleged to be responsible for the PFAS contamination that is the basis for a grant, with respect to any property that receives a financial payment or direct capital improvement from the expenditure of a grant (emphasis included),'” the memo reads.

According to the memo, the proposal’s language could be interpreted to prevent the DNR from pursuing enforcement action if a community receives grant money to clean up contamination of a site.

Shankland questioned whether Behnke understood the scope of the proposal’s impacts on his constituents, who include residents of Marinette and Peshtigo. The communities are part of the state’s most complex investigation into PFAS contamination of private drinking water wells stemming from the use of firefighting foam that contained PFAS at Tyco Fire Products’ fire training facility in Marinette.

“If his constituents were to take this grant under this new law, they would be precluded from having the DNR bring them in bottled water,” said Shankland. “I think that’s deeply troubling and concerning.”

The DNR declined to comment on the bill at this time.

PFAS, or perfluoroalkyl and polyfluoroalkyl substances, have raised concern because they don’t break down easily in the environment. The so-called “forever chemicals” have been found in firefighting foam and everyday products like nonstick cookware. They’ve been linked to an increased risk of kidney and testicular cancers, thyroid disease and fertility issues.

The DNR’s website that tracks environmental cleanups shows PFAS contamination has been found at nearly 80 sites statewide, including in La Crosse, Superior, Madison and most recently Eau Claire. The city notified residents earlier this week that it was shutting down four municipal wells after samples revealed elevated levels of the chemicals, according to the Eau Claire Leader-Telegram.

Wisconsin is crafting PFAS standards for drinking water, groundwater and surface water. State health officials have proposed a combined groundwater standard of 20 parts per trillion in the absence of federal standards. The U.S. Environmental Protection Agency has issued an interim health advisory level of 70 parts per trillion.

In a statement, Marinette city council member Doug Oitzinger said polluters must be held accountable, adding the bill makes that “more difficult — or even impossible.”

Marinette is the epicenter of PFAS contamination in Wisconsin,” said Oitzinger. “The people of this community can’t afford to sign away their rights to hold polluters accountable.”

A spokesperson for the bill’s sponsor, Behnke, said he was not immediately available to comment on the proposal or the intent of the legislation on Thursday.

The state’s largest business lobby Wisconsin Manufacturers and Commerce has testified in support of the bill. Shankland highlighted that the business group is currently suing the DNR in two separate cases over the agency’s authority to regulate PFAS.

The business group has also been an outspoken critic of the agency’s efforts to set numeric standards for the chemicals, including under an emergency rule that was weakened by GOP lawmakers in December. The rule aimed to implement a law barring the use of firefighting foam that contains PFAS except in emergencies and limited circumstances.

Nick Novak, WMC’s vice president of communication and marketing, said Thursday in an email that the group believed a clarification needed to be made with respect to the legislation.

“As the memo reads, ‘the bill does not directly reference the Department of Natural Resources’ (DNR) enforcement authority.’ We believe that clearly underscores that DNR’s authority is not impacted,” wrote Novak. “In fact, the waiver of action only applies directly to the grant recipients. To claim otherwise would be an improper interpretation of the law.”

The group has said the proposal would help communities address contamination from PFAS while protecting businesses and municipalities from “costly and frivolous lawsuits,” according to the Associated Press.

“This is not an isolated incident, and I don’t think that the broadly worded exemption of liability is all a mistake or an oversight on the part of the Legislature or the groups that are supporting it,” he said. “This is consistent with their other actions to undermine bedrock environmental and public health protections.”

Gibart called the legislation a “shameful” attempt by lawmakers to use coronavirus relief under the American Rescue Plan Act to buy PFAS polluters an exemption from liability to pay for cleaning up contamination. Both he and Shankland say the proposal should not move forward. It has yet to be taken up by the state Senate.

Last year, Gov. Tony Evers‘ administration released a PFAS Action Plan that requires polluters to commit funds to pay for cleanup of contaminated sites as part of 25 action items that were outlined to address the chemicals statewide.

Evers also proposed providing communities with $10 million in grants each year as part of the two-year state budget, but that proposal was stripped by Republican lawmakers on the state’s budget-writing committee.

The governor and Democratic lawmakers reintroduced legislation known as the CLEAR Act this spring that would create a grant program for communities to address PFAS, set interim standards for the chemicals, and provide more funding for testing. But, the proposal hasn’t received a public hearing.

Drafting files of the bill obtained by Wisconsin Public Radio reveal further details surrounding the intent of lawmakers behind the legislation, as well as the involvement of staff working for Assembly Speaker Robin Vos, R-Rochester.

The files show that Vos’ staff member Jake Wolf requested language from Evers’ proposed PFAS municipal grant program, including several revisions. Those changes included reducing the area that would be eligible for funding to test for PFAS down from 3 miles to 1 mile from a contaminated site.

The revisions also included the bill’s proposal to bar local governments from seeking additional payments for PFAS damages if they receive grant money, as well as adding language to explicitly restrict local authority to regulate PFAS.

A senior attorney with the Legislative Reference Bureau asked for further clarification about which entities local governments would be barred from seeking additional payments and specifics on restricting local authority.

In a June 11 email, Behnke’s legislative assistant Ashley Anderson also sought to clarify language in the bill to eliminate confusion over who could or couldn’t seek litigation.

“As it currently reads some people think that if any one benefits from this they cannot seek litigation whereas the intent is that if anyone directly receives the benefit would not be able to,” wrote Anderson.

Shankland questions what lawmakers knew and when as the proposal was being written.

“And is it their intent to harm the communities that are most impacted by PFAS contamination in the state?” she said.

She also wondered whether WMC requested the legislation. When asked, WMC’s Novak didn’t say whether the group made such a request of lawmakers in an emailed response Thursday.

“WMC supports this bill because input was received from diverse stakeholders, and it takes a well balanced approach to protecting both public health and the economic interests of the business community and local governments,” wrote Novak. “We hope it will receive bipartisan support moving forward.”

A spokesperson for Speaker Vos did not immediately respond to a request for comment on Thursday.