Winnebago County judge's ‘undignified language’ included threat to kill anyone who breaks into his house. 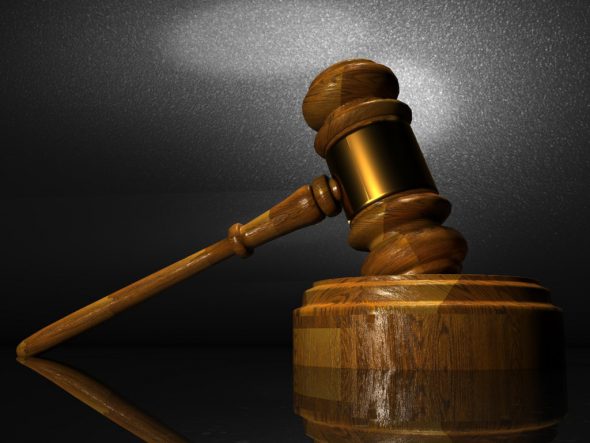 A Winnebago County judge was suspended by the Wisconsin Supreme Court for one week without pay due to a series of incidents in which he brandished his gun in his courtroom and directed “undignified” language at defendants, lawyers and crime victims.

The judge, Scott Woldt, was appointed to the bench in 2004 and has been re-elected three times since then. The incidents primarily occurred in 2015 and 2016. The Supreme Court’s decision to give him a one-week suspension was unanimous — but conservative Justices Patience Roggensack and Rebecca Bradley partially dissented.

The Wisconsin Judicial Commission — the part of the Wisconsin court system that investigates and prosecutes judicial misconduct — filed a complaint against Woldt in June 2020, but the first of six incidents happened in 2009.

The 2009 incident took place during a sentencing hearing for a man who had pleaded guilty to one count of disorderly conduct as an act of domestic abuse following an “altercation” between him and his girlfriend.

At the sentencing hearing, the man’s girlfriend told Woldt she was hoping he would just need to pay a fine and do some community service, rather than 18-month probation, because the couple was “trying to work things out.”

After sentencing the man to one year of probation, Woldt addressed the woman, saying he was tired of victims getting the criminal justice system involved if they’ll later ask for leniency.

Woldt agreed with the Judicial Commission to the basic allegations in the complaint, but disputed some of the ways in which the allegations were characterized.

Six years later, in May 2015, Woldt presided over a sentencing hearing for an 18-year-old man who pleaded no contest to a charge of second-degree sexual assault of a 13-year-old girl.

Later on in that hearing, Woldt pressured the defendant into waiving his right to speak at his sentencing before referring to the 13-year-old sexual assault survivor — who was not in the room — as a “so-called victim.”

Less than a month later, during a post-conviction motion hearing in which a defendant was attempting to argue his trial counsel had provided ineffective assistance, Woldt said he wanted to punish the defendant for using the appellate rights available to him.

“I’d love that he get found guilty, and I’d love to give him a year in jail for wasting my time today,” Woldt said.

The next day, an incident occurred at a sentencing hearing in a case in which the defendant was charged with burglary of a neighbor’s house and stalking. The defendant, who has “substantial cognitive deficiencies,” pleaded no contest to the stalking charge and the burglary charge was dismissed but read into the court record.

After one of the victims spoke about the fear that having a neighbor break into his home had caused him and his family, Woldt made a lengthy speech about “Castle Doctrine” — the principle that people have a right to defend their own homes — and the danger that the defendant had put himself in while lamenting the fact that his attorneys were saying he shouldn’t serve jail time.

While giving this speech, Woldt pulled his loaded Glock Model 43 handgun from a holster under his robes. After unholstering the gun, Woldt ejected the loaded magazine and the bullet from the gun’s chamber, before waving it around “as a prop” to the people in the courtroom.

“You’re lucky you’re not dead because, if you would have come into my house, I keep my gun with me and you’d be dead, plain and simple, but that’s what makes this so scary,” Woldt said after pulling out his firearm.

Months went by before another incident occurred, but in January 2016, a group of high school students visited Woldt’s courtroom during a Government Day event.

The students were set to debate the county board about courthouse security measures, so a student asked Woldt what he thought about the issue.

He responded to the question by again drawing his gun and displaying it to the students as a prop. He unloaded the gun in this incident as well.

A few months later, in April 2016, Woldt directed a profanity at an attorney addressing a witness during a family court hearing.

“Counsel, there’s a thin line between being an advocate and being a ‘dick’ — thin line — and you’re blurring it,” Woldt said.

A three-justice majority ruled that these six incidents constituted violations of judicial rules and instituted the one week suspension. Annette Ziegler and Brian Hagedorn didn’t participate in the decision.

“These are all serious violations of a judge’s ethical duties and show an open and callous disregard of Judge Woldt’s obligation to serve the public in a fair, reasoned, impartial, and courteous way,” the majority wrote.

While agreeing with the majority that a suspension was the proper sanction for Woldt, Bradley, joined by Roggensack, wrote that the majority was wrong for believing that a judge displaying a gun in court is a violation of judicial rules.

“The majority concludes that Judge Woldt violated three separate rules by briefly displaying a firearm while making innocuous statements in his courtroom on two occasions,” Bradley wrote. Earlier this year, Bradley was on the losing side of a 6-1 opinion in which she defended a Wisconsinite’s right to get drunk and point a firearm at his roommates.

Throughout her dissent, Bradley accuses the majority of being oversensitive to guns, at one point saying their opinion is “grounded in ‘hoplophobia,’ i.e., an irrational fear of guns,” and argues that they’ve misconstrued Woldt’s statements.

“The majority’s analysis suggests that it is disciplining Judge Woldt at least in part because it considers the display of a firearm offensive,” Bradley writes. “This court should be wary of suspending a judge elected by the people, particularly when part of the basis for such discipline rests on three Justices regarding his conduct as politically incorrect.”

“The majority blithely adopts the Judicial Commission’s portrayal of Judge Woldt as a gun-toting cowboy who misused his office to advance his stance in an ongoing political battle,” she later says.

In a footnote, Bradley states that waving a gun in court does not violate any judicial rules, even if someone might feel threatened or disrespected by the action. She also notes that under state law, judges are allowed to carry firearms, openly or concealed, in the courtroom.

“The majority argues that the Code may prohibit speech that the First Amendment otherwise protects,” her footnote states. “While that may be true, the Code explicitly requires judges to be ‘patient, dignified and courteous’ to others but has absolutely nothing to say about carrying or displaying a firearm.”

Bradley, who in the last year and a half has also compared a stay-at-home order to prevent the spread of COVID-19 to the internment of Japanese-Americans during World War II and gone along with former President Donald Trump’s fraudulent effort to overturn the results of Wisconsin’s 2020 election, made sweeping statements about the effect of Woldt’s suspension on the courts.

“It inflicts broader and more insidious damage on the institution of the judiciary,” she wrote.

Woldt’s suspension is set to begin on Aug. 2.

Supreme Court suspends Winnebago Co. judge after he brandished gun in court was originally published by the Wisconsin Examiner.