The ‘holy grail' of rare plants in Wisconsin, thought extinct since 1950s, is rediscovered.

By Isiah Holmes, Wisconsin Examiner - Jul 14th, 2021 06:25 am
Get a daily rundown of the top stories on Urban Milwaukee 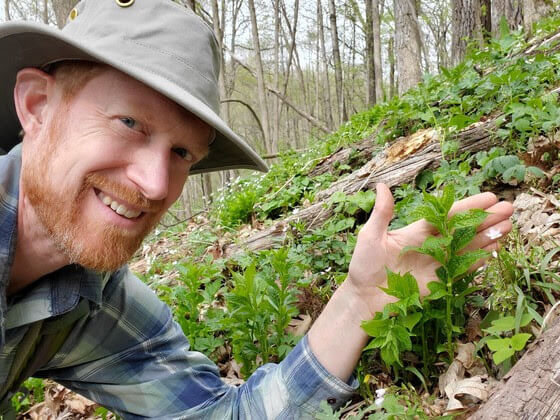 A conservation biologist with the Wisconsin Department of Natural Resources (DNR) located what the department is calling “the holy grail” of rare plants in Wisconsin. Green violets (Hybanthus concolor), which were thought to have disappeared from the state, were found growing by the hundreds in a west central state natural area.

The last time green a violet was documented in Wisconsin at a Grant County site was back in 1958. Over time, the site was affected by grazing and the green violet was thought to have gone extinct in the state. Wisconsin is at the northernmost edge of the green violet’s range. The plant is limited to rich mesic forests grown on limestone soil.

Many areas favored by the green violet have been lost to logging, grazing, or invasion by weeds like garlic mustard and honeysuckle. The green violet plays an important part in the ecosystem through its seeds. The seeds are attached to a gelatinous substance called elasiome. Rich in fat and proteins, the substance attracts ants which bring it back to their nests. By doing so, the ants spread the green violet’s seeds.

DNR conservation biologist Ryan O’Connor was excited by the find. “It really drives home several things, including that there are still important things to discover on State Natural Areas and that our SNA’s are vital to the conservation of plants and animals, some of which are found nowhere else in the state.”

State natural areas are effective at preserving hidden gems like the green violet. According to a DNR press release, 75% of wildlife species listed in Wisconsin are threatened or endangered. State natural areas support about 90% of state-listed plants. “These sites owned both by the DNR and more than 50 partners, represent Wisconsin’s best native forests, wetlands, prairies and geological and archaeological sites,” the DNR states. “Their primary purpose is to maintain this natural heritage for future generations.”

The re-discovery of the green violet also highlights the importance of biotic inventory surveys. Many rare plants or new populations of those plants are uncovered by such surveys.

Rare green violet re-discovered in Wisconsin was originally published by the Wisconsin Examiner.