Should Unemployment Payments be Lower?

Businesses struggling to hire should focus on making their wages more attractive.

With the pandemic ending, many businesses are starting back up and are looking to hire more employees, or, at least, attempting to add employees. But reports are widespread of job postings being met with little or no response from job candidates.

Some argue that blame for these hiring problems rests with the $300 supplemental weekly payment to unemployed people from the federal government. When combined with Wisconsin’s maximum payment of $370, this results in a total income of $670 per week, the equivalent of what a job paying $16.75 per hour would bring in.

Thus, the supplemental unemployment payment is blamed for the difficulty in finding new hires. As a result, Republican governors in 19 states have said they plan to drop out of the federal unemployment program, well ahead of its scheduled September expiration.

In Wisconsin, Republican state legislators have introduced Assembly Bill 336 (and Senate Bill 354) which, as summarized by the Legislative Reference Bureau, “requires the governor and the secretary of workforce development to terminate this state’s participation in federal programs that provide or supplement unemployment benefits to workers in this state.” Among other things this legislation would force unemployed Wisconsinites to get by on $9.25 per hour.

Is the $300 weekly federal supplement really to blame for the difficulty some Wisconsin employers have in hiring? The graph below shows the unemployment rate for Wisconsin (in purple) and the nation as a whole (in green) since March 2007 — shortly before the economy started to slide into the Great Recession. Note that the Wisconsin rate is generally lower than the nation’s, under both Republican and Democratic president and governors, suggesting that it results more from structural factors. 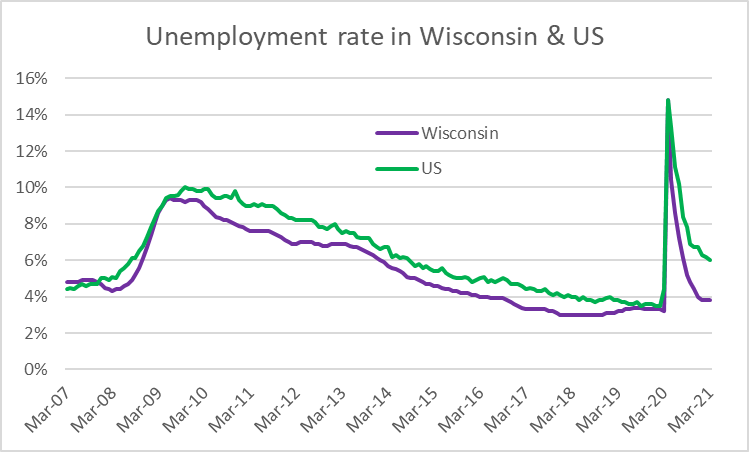 Unemployment rate in Wisconsin & US

The next chart shows U.S. and Wisconsin unemployment rates since January of 2020. At the start of 2020, unemployment had dropped to 3.3% in Wisconsin (3.5% nationwide). Then the shutdown in response to the pandemic caused a jump to 14.8% in both Wisconsin and the U.S. in April of 2020.

Since then, unemployment has declined steeply: to 3.9% in Wisconsin and 6.1% nationwide. 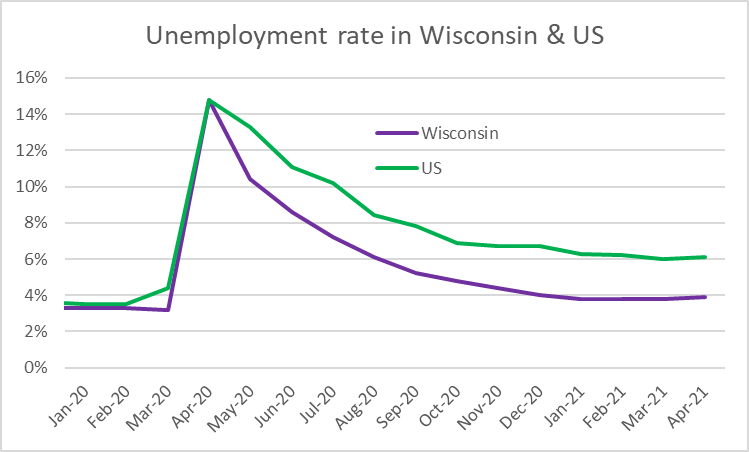 Unemployment rate in Wisconsin & US

An unemployment rate below 4% is surprisingly low, particularly considering the trauma Wisconsin had just experienced. Economists used to define full employment at around 5%. Economists have lowered that to somewhere above 4%. In its budget projections, the Congressional Budget Office uses 4.5% for the “natural rate” of unemployment. What could explain such a low rate?

One place to look for an explanation is the Wisconsin labor force. The labor force consists of two groups of people—those presently working, shown in yellow in the graph below, and those looking for work, shown in green. Overall, the labor force dipped with the onset of the pandemic, follow by a partial recovery. Today, it is down slightly and the unemployed are a slightly larger share of it.

If a significant number of people are rejecting jobs because unemployment insurance is more lucrative, that is not evident from the data. 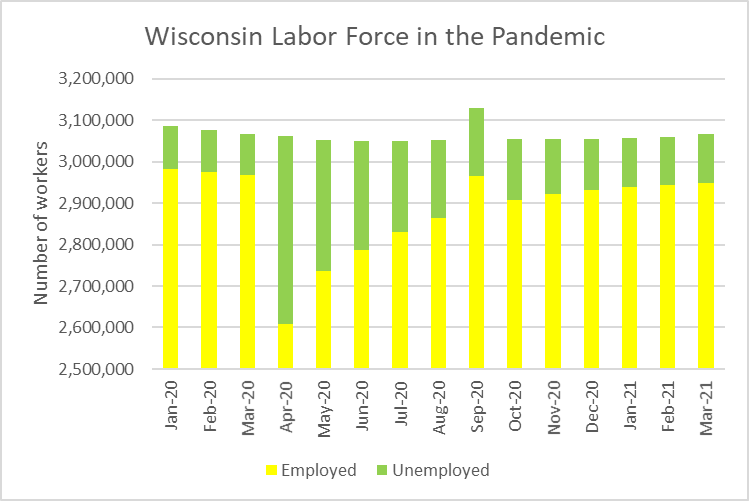 Wisconsin Labor Force in the Pandemic

A similar story of major disruption followed by a return to an economy similar to the pre-pandemic economy is told by the history of unemployment insurance claims, as shown below. During 2019, continuing claims averaged about 30,000. After peaking at 320,000 early in the pandemic, they have dropped to 74,000 most recently. 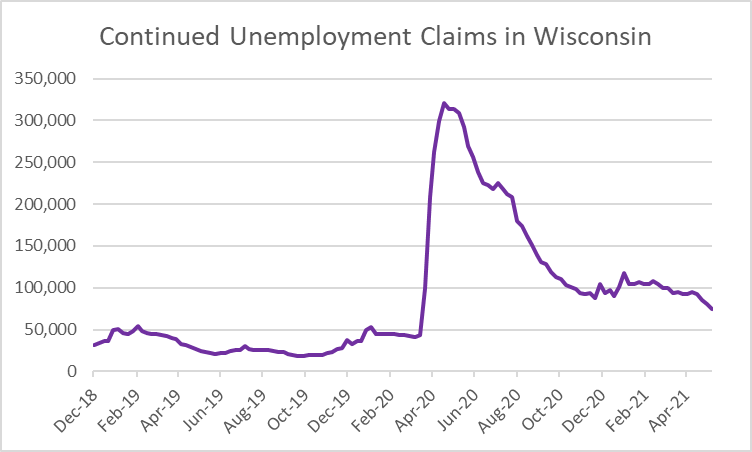 Put another way, the Wisconsin leisure and hospitality industry is down 58,000 jobs from its pre-pandemic size. During that period the Wisconsin labor force shrank by almost 20,000—3,400 more unemployed and 16,000 who left the labor force. The remaining 38,000 most likely found jobs in other sectors. Many are unlikely to come back.

I suspect that many of the people who had filled those jobs are not returning because they have found other jobs, helping to explain the difficulties businesses in that sector have had in filling them. Perhaps a period of enforced joblessness gave them the chance to think about what they really want to do with their life. Republicans have jumped to the conclusion that workers are missing because they do better with unemployment benefits. What we need is data on where those losing their jobs in the pandemic have gone.

Leisure & Hospitality Jobs in 2020–US & Wisconsin

The Republican attack on the enhanced unemployment payments betrays a world view—that people need to be punished into joining the workforce. A recent white paper suggests that that view may be overly simplistic. An experiment in Stockton California gave 125 poor people $500 per month for 24 months, with no strings attached and no work requirements. More of the grant recipients found full-time employment than did those in the control group, as shown below.

Figuring out how many people are resisting employment because unemployment insurance is more lucrative than a paycheck is difficult at best, but the number does not seem to be large. Potential employers of those people might be better advised to look at how to make their jobs more attractive, rather than concentrating on punishing people into their workforce.

4 thoughts on “Data Wonk: Should Unemployment Payments be Lower?”